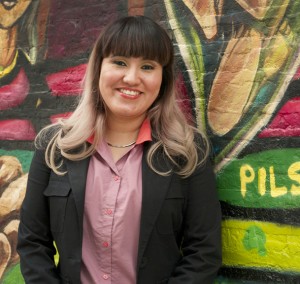 Stephanie Manriquez is a writer, multicultural guide and social activist,  also known for her work in public radio as an independent producer. Documenting current events in public radio during her time at Radio Arte allowed Stephanie to creatively shed a light on social justice issues affecting Latino communities. A Mexico City native, Stephanie has also reported on issues including adult education, literacy, housing, health and migration, including by working closely with community organizations Casa Aztlán, Frida Kahlo Community Organization, Elevarte Community Studios and The Resurrection Project. Stephanie is a also a founding member of the Festival of Latin Electronic Music, a cultural event organized to encourage visual, digital and multimedia art and music. And she is a co-founder of Chicago Latino Writers Initiative, a space dedicated to cultivating a new generation of Latino writers. Stephanie currently collaborates with and contributes to publications including Extra Newspaper, Remezcla, Pilsen Portal, Gozamos and Revista Contratiempo. Her extended collaboration with Contratiempo since 2008, and as member of their editorial team since 2010, has allowed her to focus efforts on issues concerning Pilsen’s immigrant community. In her spare time she is part of DJ duo The Ponderers.