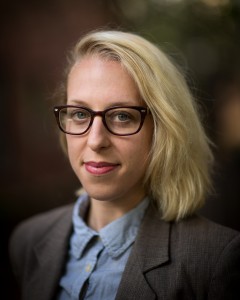 Meribah Knight is a freelance journalist based in Chicago. Most recently she was a staff reporter with Crain’s Chicago Business covering manufacturing and transportation. Prior to Crain’s, she was a staff reporter with the Chicago News Cooperative, producing the Chicago section of The New York Times. There she covered a wide range of topics from arts and culture to education to poverty. She has written for The New Yorker and for TheNewYorker.com, as well as The New York Times, O The Oprah Magazine, Utne Reader, American Craft and Chicago Magazine. Her radio and multimedia work has been featured on WBEZ, The PBS News Hour and WTTW. As an 8-year-old she co-authored a book about her childhood literary heroine, Laura Ingalls Wilder, titled “Searching for Laura Ingalls.” She considers it one of her greatest accomplishments. A native of Cambridge, Mass., Meribah has a Masters of Journalism from Northwestern University and a B.A. from New York University in African American Studies and Racial Politics. She is an adjunct lecturer at Northwestern University’s Medill School of Journalism. When she isn’t reporting she is working on her first young adult novel and hanging out with her three cats, Abner, Maybelle and Elwynn.