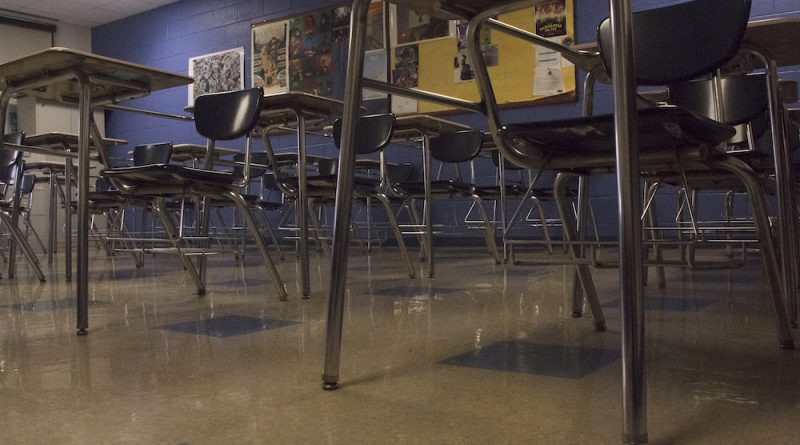 Timothy Hughes teaches physical education, drivers education, and also sex ed in the World Language high school housed at Little Village Lawndale High School in Little Village. Throughout his years as an educator, he has seen trends happen with his students about how they approach subjects like sex and how to responsibly handle relationships.

Sex education is important for people of all ages, especially youth. According to the Chicago Public Schools curriculum, sex ed should be taken yearly and students should master the lesson requirements given for each year. Yollocalli and the Social Justice News Nexus wondered if these requirements are actually enforced and how seriously they are taken.  We sat down with sex ed teacher Timothy Hughes to hear about his views and teaching strategies.

For what duration have you been a sexual education instructor?

I’ve taught health for about 13 years [though not in the last four years]….I never was a hundred percent —  I mean, I wish I had been a little more knowledgeable. A lot of the stuff, I had to go over and learn on my own. It was a lot of trying to create your own curriculum.  [Now Chicago has] this set curriculum so you’re not spending all this time creating one and of course you can add to it.

What are the minimal requirements needed to qualify to teach sexual education?

Go through some training. Usually having a health minor. In Chicago, you’re not mandated to have a health minor to teach health. I know for me I went through  sex ed training, and I know for sure [fellow teacher] Mr. Turnbull has a minor in health.

What’s your personal opinion on the Sex Ed Curriculum and how would you describe it?

When I taught sex ed, we went over sexually transmitted infections, dating, physical abuse and relationships. I know that in the future, even if we’re not teaching health, we have to incorporate some type of sex ed into the class for juniors, seniors and sophomores too. I think it’s on the way to getting better, but now because of this new mandate — because of all the sexual abuse that occured in Chicago Public Schools between students and students and teachers and students— we need to make people aware of what are boundaries.

Do you personally enjoy teaching the course?

Well, I don’t teach it so much right now. I prefer teaching driver’s ed personally and PE than I do health. I feel more comfortable in P.E. and driver’s ed.

Would you care to share why it is you feel that way?

I just feel more comfortable. I feel like I have more knowledge. But I do need to incorporate some of the sex ed with my classes — at least showing some videos and having discussions with some of the kids. But sometimes it’s difficult, because when the kids are in gym and when you take them out of the gym and take them to a classroom and want to teach them something that’s not part of sports or gym they kind of … sometimes they’re not always as receptive.

What do you think about the sex abuse scandal at CPS?

What are some instances you’ve encountered of students approaching the topic?

They don’t normally come to me to talk about it until someone gets pregnant, then they’ll mention it to me. In all my years teaching, which is 18, there’s always been at least one person who’s gotten pregnant…I kind of feel bad for the younger generation because it has so much access to pornography on the internet, what they show on television.. To me it’s very unfortunate.

Can you elaborate more about your concerns about pornography?

As a person of morality and Christian, Catholic [values], I think it’s very unhealthy for a person to be learning about their sexuality in really graphic images. When I was a kid, yeah, maybe you saw a magazine of some naked women, but now there’s so much access to kids at a very early age. They don’t know what it’s going to do to that person’s brain and how it’s going to affect real relationships. So I find it very disconcerting. I find it very troubling, personally.

Throughout your career teaching sex ed, did you ever separate the students by gender?

No, it was all taught with guys and girls.

Personally, did you feel comfortable teaching the opposite sex?

No…Personally, I know it’s not politically correct,  but I think in a lot of ways [P.E. and health] would be better separate.  It used to be separated by gender and they aren’t [now]. Some females are very comfortable being in the same class as boys and some boys feel very comfortable being in the same class as girls. But I think there’s a lot of boys and girls that would feel more comfortable if they were separated because they could talk more openly and freely. So I think I’m old school.  For the females, I think they would be more comfortable sharing and opening up about things [without boys present]. But I know it’s not going to change.

What misconceptions have you heard from students?

You know, sometimes kids think you can’t get pregnant the first time. They think that when you have sex and you pull out during an orgasm you can’t get pregnant. Oftentimes, they’re very misinformed about sexually transmitted infections and how it affects them. Some infections never go away. I’m not sure how much they learned in elementary school.

How do you incorporate LGBTQ issues in the sex ed curriculum?

I wouldn’t mind teaching it, but I also want to make sure people understand that just because you’re feeling a certain way at 15 or 16, your body is changing so much it doesn’t mean, you know you might change. It might change as you get older…Puberty is difficult. I mean you’re having questions about who you are or what you’re feeling or what your sexuality is. Just take time, don’t freak out  and realize you might feel differently when you’re 22 or 23. You don’t have to necessarily make a decision of who you are right now. It’s a personal thing, but still talk to someone about it. Make sure you have someone you can trust and talk about it.

What advice do you have to offer students with questions relative to their sexual identity?

What in your opinion do you believe the Sex Ed Curriculum lacks?

I think it’s important to get into the boundaries. What are the boundaries? What is considered sexual abuse? What are your personal boundaries? Make sure people have a clear understanding of that, so if they’re in a relationship and they are getting forced to do things or feel uncomfortable they understand exactly what their legal rights are.

Do you feel you’ve ever gone above and beyond as an instructor and helped out a student?

Yeah, I think so. Absolutely! When you give them information on how to protect themselves, to be safe, learning about healthy relationships, yeah I would say so.

Have students ever brought an issue to you directly? Any examples you can share?

Well, just recently someone came up to me and told me they were pregnant. I wasn’t disappointed, but I was bummed out because I knew it was going to be challenging. I asked her why she didn’t protect herself or take precautions because this is a life-changing event at a very early age.

Does the CPS curriculum require that you put an emphasis on abstinence?

No. We would bring people in to talk about abstinence, but…I wouldn’t say it was emphasized. It was definitely talked about, taught and made clear that it was an option. Abstinence is an option, a healthy option. You have your whole life to be involved and you know human sexuality doesn’t start at 16 and end at 21. It’s for your whole life, and it changes throughout various aspects of your life. It’s different when you’re 50 from when you’re 20, but we do encourage people to [practice abstinence] and there is nothing wrong with that. Unfortunately, it’s an uphill battle in a society where … culture pushes human sexuality in a not-so-healthy way, whether it’s on the TV or internet. It’s an uphill battle, but there is certainly nothing wrong with [abstinence].

What role should parents take throughout their child’s sexual education course?

Well, they’re supposed to be informed and sign a letter stating that they [allow their child to take the course]. Also, the parents need to talk to their kids. A lot of times you’re very busy and it’s not very comfortable. I don’t recall my parents talking to me that much about this.

Are there any restrictions, anything that is not allowed to be addressed throughout the course?

Do you address abortion throughout the course? Do you feel comfortable addressing it?

No, we never did address abortion. I’ve talked about it before. My views have changed a lot. As I’ve gotten older I’ve gotten more conservative about that sort of subject. Yeah, [on second thought] I think we’ve talked about it before. It’s a cliche question, should abortion be illegal? It’s definitely become very important, especially in the last couple of months, you know. With all these abortion changes, law changes. I respect people’s  views, and you know, some people’s views and religion don’t believe in it, and that’s okay too.

What do you think students should be asking?

I think it’s important they ask or figure out what is important them as far as human sexuality. Find out how not to be pressured to be sexually involved. Talk and ask about stuff involving morality and their personal beliefs, like [waiting until marriage]. These decisions affect them emotionally and affect them physically…Also, they need to ask questions about sexual abuse, because you know you can have a boyfriend and you say no then that means no. It’s important to know what the boundaries are.