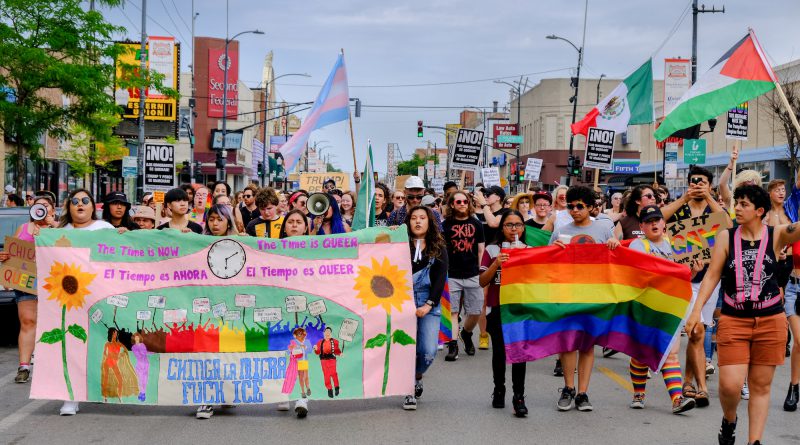 In Little Village, many young people lack information about sex and healthy relationships, putting their health at risk. There is an insufficient amount of resources and education provided from the city and in schools. In addition, it can be difficult for parents in Little Village who were raised in traditional lifestyles to talk with their children about sex. Luckily, non-profit organizations are providing resources for sexual education and health, including HIV prevention and treatment. And most importantly, some youth in Little Village have taken interest and are leading the way in seeking comprehensive education and dialogue about sexual health.

“Before, when I was being raised, my parents would never talk about sexual education, it wasn’t a topic that was often talked about,” said Elma Godinez, a Little Village parent. “One would just be scared if a relationship was sexually active.”

Many youth are reluctant to come forward with questions, thoughts, and emotions for fear of being subjected to stigmas from their parents and others.

“Parents are from a different generation than what it is today,” said Stephanie, an 18-year-old who lives in Little Village and is a senior at Curie High School. Now, “it is more open, and back then [talking about sex] was super frowned upon,” she said.

It is often difficult for youth to bring up sexual health in conversation because of the misconceptions and stigmas that come from their family and community. They are afraid of receiving backlash from their parents or being misunderstood.

Brithany, a 16-year-old who lives in Little Village and is a sophomore at Kennedy High School, expressed her concern. “All of them [fellow students] told me they don’t like to talk to their parents about that stuff,” she said. It makes you wonder who exactly the youth are supposed to turn to when they need advice.”

Little Village resident Lucia Torres has children who attend Chicago Public Schools. She is in favor of Chicago Public Schools teaching sexual education. She believes that it is important material for both children and parents to learn, so whenever children have questions, they can feel more comfortable talking with their parents. “Like if you’re in a traditional Latino home, you don’t talk about it, it’s a stigma,” she said.

Parents are informed before courses start and given the option to “opt-out” their children from specific lessons from any grade level. Stephanie and others find it troubling that parents can remove their children from sex ed classes or lessons, especially since the curriculum covers decision-making and communication skills to help students on the choices they have made and will face.

The goal of sex ed is to keep youth healthy and safe, and to properly educate students to avoid situations that could have a negative impact on their lives, including sexually transmitted infections. As mentioned in the CPS curriculum, “As long as Chicago youth continue sexual risk-taking behaviors and do not get tested, infection rates will continue to rise.”

If the age groups from 13-19 and 20-29 for gonorrhea were to be combined, then they would represent 70% of cases in Chicago. Testing for STIs is crucial to help youth get treatment and avoid spreading the infection. But getting tested can be especially difficult for teens and young adults, due to factors like cost, privacy concerns, transportation, and accessibility.

Project VIDA, a non-profit organization that was founded in 1992, aims to raise awareness and serve the urgent needs of racial and ethnic minorities. Project VIDA’s mission is to improve quality of life and reduce health disparities in underserved communities by promoting self-empowerment and providing holistic health education and direct services.

But Project VIDA alone can’t meet all the need in Little Village and surrounding areas.

A 2011 report shows an imbalance of organizations offering services for people with HIV on the North Side of Chicago, in comparison to the South and Southeast parts of the city. For people who are infected with HIV and the larger community, having access to counseling and treatment is crucial. But these resources are lacking in Little Village.

According to the 2017 HIV/STI Surveillance report, the use of viral suppression is effective in decreasing the rate of HIV transmission. Viral Suppression is when antiretroviral therapy reduces a person’s viral load to an undetectable level. Hence, having resources for people with HIV helps them remain healthy and also reduces transmission to other people; but people with HIV in Little Village might not get these resources.

The non-profit Howard Brown Health Center is one of the city’s main providers for HIV prevention, treatment and other services for LGBTQ+ people. Project VIDA works in partnership with Howard Brown, referring people to its clinics. The closest Howard Brown clinics to Little Village are at 641 W. 63rd St. in Englewood, at 1525 East 55th Street in Hyde Park and the La Casa Norte location in the Humboldt Park, the most recently opened and closest space to Little Village.

Programs, services, and workshops like those offered by Howard Brown and Project VIDA can offer more hope for youth and adults to educate themselves and make important life decisions. Antonio Elizondo, manager of sexual reproductive health outreach services at Howard Brown, explained a few struggles that individuals might face.

“What Howard Brown focuses on [is] what health looks like for queer individuals, breaking down barriers and boundaries that some of those individuals may have in other health care settings that aren’t specialized for that population,” Elizondo said.

Elizondo works with Project VIDA and the University of Chicago with help from the Centers for Disease Control and Prevention (CDC) to provide HIV/STI testing and to connect folks from South Side neighborhoods like Little Village to their nearest Howard Brown location.

Meanwhile active community organizers have been fighting the disparity Little Village faces in community engagement, sex education, and support for marginalized individuals. One example is the collective known as the Chicago Dyke March that has been active in the streets of Chicago since 1998.

For roughly 10 years, its core location was the North Side neighborhood Boystown, but in 2008, the Chicago Dyke March Collective decided to move to the south in Little Village, based on who made up the collective.

“Dyke March currently is a collective of people of color (POC), Queer, and Trans individuals who may or may not identify as dyke precisely, but all work together to organize this rally once a year, the day before Pride, to highlight and celebrate the lives of queer and trans people of color (POC) in the community,” said Cristal Alba, member of the Chicago Dyke March.

Members of the Chicago Dyke March Collective said they are proud to be located in Little Village.

“As we mentioned from the first year, it is really important to highlight those intersectionalities of being queer. What does it mean to have a sanctuary, a safe space?” said Arianna Salgado, a member of the collective.

Alba enunciated her feelings and concern for youth who are being affected by the lack of diverse sexual education and health resources. “It’s important to feel validated, it’s important to feel like you have options, and you don’t have to fit in a certain bubble, and you can do that safely in a place you call home,” she said.

“The collective has always tried to work closely with local organizations that are established in the neighborhood… to connect and learn about the neighborhood. To be able to do outreach successfully,” she added.

Chicago Dyke March organized with the Little Village Environmental Justice Organization (LVEJO) in 2018, and for their 2019 rally, Project VIDA will be in support.

“One of my priorities is for young people to see that we can do this, out on the street collectively and supporting each other,” Alba said. “Seeing families and children join the march along the streets of Little Village make up what the collective is about. Showing support and being present.”

Youth from Yollocalli Arts Reach in Little Village, a youth initiative of the National Museum of Mexian Art, have expressed their feelings and questions about sexual health and education and other community issues through the projection of their voices on the airwaves and through other art forms.

In fall 2018, Wattz Up!, a radio show produced by the teens as part of the project “Your Story, Your Way,” collaborated with Planned Parenthood’s “My Body, My Story”, a youth-led campaign that focuses on sharing information about birth control and sexual health.

In the episode called “My Body, My Story 2.0,” youth from both organizations shared questions, comments, and concerns about sex with their audience. Social media, films, and the music industry were mentioned as influences.

“It’s dangerous to normalize [the lack of communication], not having an open and communicative conversation about sex,” said Emma McKhann, artist and the official illustrator for the “My Body, My Story” campaign.

On that matter, Wattz Up! show hosts Gloria Valle and Giovanni Macias opened up on the importance of consent, the limited amount of education on straight and queer intercouse, as well as the minimal information that is being provided by Chicago Public Schools.

Yollocalli, being a safe-space for youth, allowed teens in the audience to open up about uncomfortable scenarios they have experienced. As a result, appropriate aid and resources for mental, physical and psychological support and for sexually-abused victims were shared.

For instance, the topic of toxic masculinity and the emotional stress that a female might face in today’s society were discussed.

“Guys are more like ‘I’m going to try again’ because that’s what society is staging us, but I feel that you need to take time for yourself to see if you’re ready to be in a relationship yourself, and if that person is not interested then respect that and just be friends or best friends,” said one youth during the program. “Overall, just be a nice guy and respect someone’s choices.”