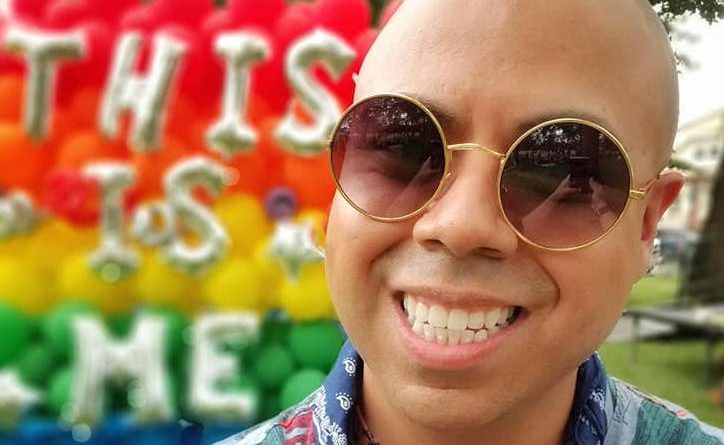 Emmanuel Garcia has been a prominent organizer in Chicago’s LGBTQ community for nearly two decades. His work has centered on Chicago’s Latinx LGBTQ community, promoting awareness of health issues that the community faces and mentoring LGBTQ youth. In 2015, he was inducted into the Chicago LGBT Hall of Fame.

Yollocalli and the Social Justice News Nexus recently caught up with Garcia to ask him about the issues faced by Latinx members of the LGBTQ community in the Chicago area and how LGBTQ rights have evolved over the years.

You worked with Project Vida, an HIV/AIDS prevention organization in Little Village. What can you tell us about that?

What we found out was that everyone that we talked to, whether it was parents or older folks, seniors, stakeholders in the community, business owners, [or] just residents in general in Little Village, everyone had a connection to someone who was LGBT. … There was always a connection. It wasn’t an issue that was far-removed from the community. We found out that what people didn’t have was the language, and kind of the education on what LGBT issues are or the issues that LGBT young people or people in general face, and that was primarily because no one had ever provided those resources or that education in that community…People’s language that they used was probably a little bit outdated, but it wasn’t to offend anyone. It was just lack of education.

So that’s where we came in, and we did a lot of trainings for the community both in English and Spanish around creating LGBT 101, if you will. And so in doing that work, we actually discovered that younger people in the community, what they were really interested in was learning more about gender, and gender identity and the trans community…Towards the end of the two-year project, we shifted to doing more work with the trans community in Little Village, because we knew that was something that people wanted us to do. And so we did work with places like La Cueva, which is the queer bar in Little Village [that employs many transgender women], and began to build relationships with people who worked there.

How does the Latinx community treat LGBTQ people?

I think that discrimination as a whole exists. [But] one of the things that we’ve found out in doing the work that we did in Little Village and in Cicero and in Pilsen was that … they were actually very welcoming. Often times I would walk into a business or something and talk about the project we were doing, and we had a poster that we created that was about creating inclusion of LGBT people in the community. I would explain what the poster meant, and I would identify myself as part of the community, and people were so welcoming and open. People would follow up with “Oh, yeah, I have a cousin or I know someone” who identifies as LGBT. I don’t want to say that there’s more homophobia and transphobia in that community, I think it’s just a lack of education and awareness in general.

Overall, trans people by far are discriminated against by all communities. You know, it’s not necessarily unique [to Little Village]. And if you talk to Latina trans women here in Chicago, a lot of them have the support of their families.

Part of what we’re investigating is queer sex education in schools and how it’s taught. Do you have any insight into that?

It has its own limitations.

[Project Vida would often go to local schools to present sex ed workshops or classes, and they found that much of the schools’ sexual education curriculum was heterocentric.]

This should not be the way that students get sex education, by relying on small organizations to come in and provide it, because it fluctuates. [There’s a lot of] staff turnover at different not-for-profits — one person could be really skilled at doing it and another person could be learning. And you just have so much variation that there isn’t consistency in the message, and so I think that that really sets up for a poor quality of sex ed. It doesn’t make sense to me why schools rely on not-for-profits to come in and do these trainings, when in fact everyone should be able to answer these basic questions.

And I will say that, while we are trained…even within ourselves sometimes we’re like, “Wait, how do you do — what?” We’re not medical providers. We only go through this one training. It’s not like having the nurse at your school do a comprehensive training that makes more sense and you can ask more questions.

What would you say are the biggest issues facing LGBTQ people in and around the Little Village and Pilsen communities?

It’s really Chicago as a whole, but let’s say that for those two communities, trans issues and youth experiencing homelessness are two of the biggest issues…Especially if someone is Latinx, the behaviors around youth homelessness within the Latino community [are] very different and unique than other communities, just because of how the family units are within Latinx families. At least that’s something that I’ve heard.

And then the other part is, while there are more [health and community] services for trans women, there isn’t necessarily a streamlined system for trans women to access services…It wasn’t until recently that more providers are providing hormone therapy for older people who are trans, so that in itself is new. And so there are still a lot of people who don’t know that they can go to Stroger Hospital [Cook County’s public hospital] and access hormone therapy. Also, because of our health system, they don’t know that they can, even if [they’re] undocumented they can apply for CountyCare, and get insured and covered to access these services.

So there’s still a lot of not having the information, but also just that’s the way that discrimination comes in from society as a whole. If a [transgender] person doesn’t “pass” — if it’s someone that doesn’t kind of “look” like a woman or “look” like a man, they don’t pass in our society, and then they’re discriminated against. But I will say that one of the interesting things that I always find is that in the Latino community, you do see more people employed like at restaurants, or a grocery store, or at factories. It’s just a different type of experience, but it doesn’t necessarily mean that the systems don’t push trans women as a whole to do sex work.

Why do you think that the North Side of Chicago gets more of LGBT health resources and funds?

There’s a variety of reasons.

[Places in Chicago like Boystown, on the North Side], have really monopolized those resources, if you will. So that’s why they’re centered in that area, because it was primary gay, white men who were accessing and building these resources…

Places like, for example, Howard Brown are trying to expand their health services to reach different parts of the city. So I do see this attempt to try to rectify something that historically has been in Chicago for over 40 years. So they now have a clinic on the South Side, they have one way up North, they have one on the West Side, Humboldt Park, that they’re creating now. And there were rumors that they wanted to kind of take over Project Vida in Little Village and be one of the sites there, but there was also this rejection from the community in Little Village and Project Vida because they felt like they were going to be basically bought out by this larger organization that just didn’t have the same kind of history and roots in the community that Project Vida has just had for a long time.

The South Side, the West Side, in Chicago are just neglected overall by the city, not just by gay organizations, but just by the city itself.

What are some solutions to the problems that we’ve discussed in the community?

I think that the solutions are providing the resources [and] having adequate funding. Funding is important to find solutions, to provide education [and] to provide resources; it shouldn’t just be one place or one location responsible for those things.

Do you think the new mayor may focus on LGBTQ community issues more?

I think yes, because Lori Lightfoot is an “out” lesbian and has a long history of relationships with different stakeholders who are “out” in Chicago. I don’t see why there wouldn’t be an emphasis. But I don’t know. It’s tricky, I’m not sure what role she’ll play in areas like Little Village. And I do think that anti-blackness in the Latino community is a real thing. And if the messenger doesn’t look like you, then maybe you’re not as receptive. So I don’t know.

How have perceptions of the LGBTQ community evolved over the years?

I came out when I was 10 years old. I did! True story…When I was in high school in the late 90s, [my class was one of the first to have] a Gay-Straight alliance in their school. And now a lot of schools have Gay-Straight Alliances in their schools or gay clubs, and that’s been going on for a long time now. So I think that that kind of organizing work within schools has been really instrumental in just fostering a different level of environment for young people.

Then you have media, and how much representation there has been in the media around LGBT “out” people. I think that shifted the conversation. And then the big theme that I feel really kind of threw everything over in this positive way was when gay marriage happened. The fact that that no longer seems to be an issue, at least in large part, that that’s an option for people. Before, gay relationships were kind of made to feel like they were something that you needed to have as a secret or in silence.

Young people now have a very different attitude towards their LGBT peers than previous generations. Mind you, I’m talking about Chicago, a big city. I’m not talking about like, more isolated places [because] unfortunately, the isolation doesn’t only create homophobia, it creates so many other things like racism.  It’s just a different generation that cares more about different things and doesn’t really think it’s that controversial anymore.