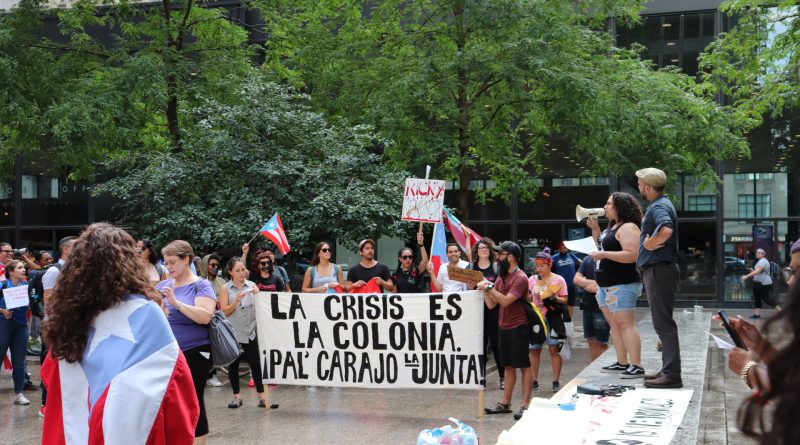 Protesters demanded the resignation of Puerto Rico’s Governor Ricardo Roselló in a rally at downtown Chicago’s Federal Plaza Tuesday night. In the crowd people originally from Puerto Rico joined Chicago-born Puerto Ricans and  others who simply wanted to support the island and its Chicago community. Those in the sea of red and blue shirts, Puerto Rican flags and handmade signs chanted “Ricky! Resign!”, pausing only for support honks from the street and speeches by the night’s organizers.

“We need a government that is truly of the people and for the people,” said Miguel Alvelo, co-director of the Chicago Boricua Resistance, in his opening speech.

On Saturday, the Center for Investigative Journalism in Puerto Rico released 889 pages of text messages between Governor Ricardo Roselló and his administration that included homophobic, misogynistic, sexist language regarding the media, fellow politicians and others as well as ostensible jeers at the Hurricane Maria body count. The texts were sent between November 2018 and January 2019.

“I’m not surprised. This confirms everything activists have been saying for a while,” said Jazmine Salas of the Chicago Boricua Resistanc

The revelation came less than one week after the arrest of two of Roselló’s top former officials by the FBI for alleged corruption. The case against them includes charges of misappropriating funds intended for education and health care for personal use.

As of the protest Tuesday, Governor Roselló insisted he wouldn’t step down, and said he’d run for re-election in 2020.

Though the text messages sparked the protest, the night was about something bigger. It was a fight against the imperialist, colonial  relationship between Puerto Rico and the United States, multiple protesters said.

“We are living through a historic moment in our people’s history,” Alvelo said to a rowdy crowd. “This is nothing but a symptom of a disease. That disease is colonialism. That disease is imperialism.”

The protest was hastily organized by the grassroots group Chicago Boricua Resistance, joining other Puerto Rican diaspora communities who convened in cities nationwide  in response to the protests in San Juan, Puerto Rico’s capital, over the weekend, during which police repsonded to demonstrators with tear gas and pepper spray.

Cristian Castellanos, 36, was born and raised in Puerto Rico but moved to Chicago 18 months ago.  He had friends in San Juan who were tear-gassed and intimidated by the police, motivating him to attend Tuesday. “This is the first time I’ve protested anything. But we’ve reached a tipping point,” he said.

Collectively, there are over five million Puerto Ricans living in the United States, according to Pew Research Center. That’s more than the island’s current population. Many left their home due to a crippled economy, a dwindling job market or, after Hurricane Maria in 2017, a humanitarian disaster.

Puerto Rico faces $72 billion in debt. A 2016 federal law called PROMESA sought to address the financial crisis by creating an oversight board board and a process for restructuring that debt. Then-President Obama appointed seven members to a Fiscal Control Board made up of mostly bankers or lawyers, none of whom lived on the island. To slash costs, the board reduced services, cut pensions and privatized public assets like the power grid, schools and roadways.

“Government in Puerto Rico is an illusion. The Fiscal Control Board is running the island,” said Rosanna Rodríguez-Sánchez, the newly elected alderman of the 33rd ward and founder of Chicago Boricua Resistance. That’s especially problematic, she added, because the President, for whom the Puerto Ricans can’t vote, appoints the board. In May, a federal court granted a 60-day extension for President Trump to re-appoint existing members or make new appointments.

“Right now, it’s an absolute impossibility for Puerto Rico to develop as a country because of the power and control of the U.S. We deserve reparations so we can finally stand on our two feet, which is something we’ve never been able to do,” she said.

For many in attendance, including, Rodríguez-Sánchez , Governor Rosello’s resignation would be only the first step in addressing the core issues the island faces. In her short address, Alderman Rodríguez-Sánchez said the ultimate goal was to “decolonize Puerto Rico,” which would require a new gubernatorial election and the dissolution of la junta, as Puerto Ricans call the fiscal control board.

Salas agreed. “The next governor can’t be a colonial puppet. We need someone who can make Puerto Rico free,” she said.

The protest culminated with a march to the Chicago Board of Trade, a symbol of the finance industry blamed for trying to profit from the island’s debt crisis through buying up cheap bonds. “Our city has a vested interest in continuing the crisis of Puerto Rico because of la junta,” Alvelo said.