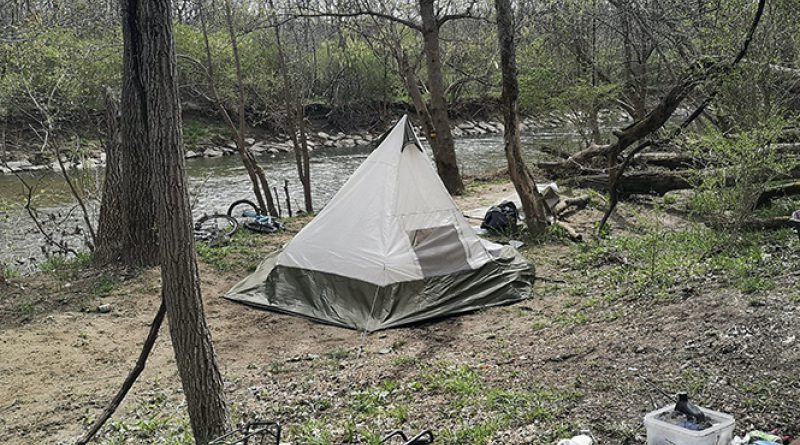 NEWARK, OHIO — Jason has lived in a camp along a river in Licking County, in rural Ohio, for about five years. It’s too cold during the winter but he always comes back when it gets warmer. This is basically his only home, since he lost everything in a house fire five years ago.

The number of homeless people appears to have increased notably in Licking County, especially in the revitalized downtown Newark area. The annual Point In Time homeless count recently revealed a total of 198 homeless individuals in Licking County, according to the Newark Advocate. Deb Tegtmeyer, executive director of the Licking County Coalition for Housing, was quoted in the story noting that the Department of Housing and Urban Development suggests the actual number is likely two to three times greater than the count reveals.

Losing belongings is a common experience for homeless people like Jason. Loss of property like homes, cars or computers may cause them to become homeless in the first place, and once someone is homeless, it is a constant struggle to protect one’s belongings. Property may be stolen by other homeless people, vandalized as an attack on the homeless or confiscated by police. And when surviving day to day is so precarious, losing one’s belongings can make it that much harder to survive and try to make it out of homelessness.

In March, residents living in a large homeless encampment on railroad property in Newark had their belongings taken and their tents bulldozed, according to reports received by advocates. City and police officials, who did not respond to calls for this story, told local media the people were not allowed to camp on private property and were given three hours’ warning to remove their belongings. Homeless advocates like Jen Kanagy, who is running for city council, said the sweep left homeless people out in the cold without their possessions and nowhere to go.

Jason has permission to live on the property where he camps, he said, helping the owner keep watch over it. But still, he risks losing his belongings.

Among all the things he has lost, Jason misses his pit bull mix, Peppy, the most.

“She saved my life,” Jason repeated several times during our talk. He used to call her name and Peppy would appear in a second, he remembered fondly.

He reminisced about a rainy day in the past, a great time for deep sleep with the sound of rainfall and splashing water. But such weather can also be dangerous for a camper. Jason usually uses a stick to test the water levels in the river, but he made a poor judgment that day. He went to sleep with few worries until being woken up by Peppy. The river was up —coming close to the front of the tent. He could have drowned without his smart canine friend, he recalled.

Since pit bulls are often considered dangerous, one day, a group of activists “stole her from me” in broad daylight,” he said. Jason took pictures of them and went to the police station. There are no bad dogs, Jason said, only bad owners. He tried to report the loss of his dog, but the police officer didn’t seem interested.

Jason has little luck in getting help from police officers in general, he says. Without a house, he doesn’t have a place “to be stolen from” as he was told by an officer.

“I don’t have a front door,” Jason said. “So I’m not entitled to having my stuff returned or investigated.”

Two years ago, when Jason came back to his tent, he found it was destroyed by several teenagers. Now, he carries all his belongings in a backpack or a duffle bag. A few days before we visited him, his bike was stolen — someone cut the lock. Jason has all the information about the bike, but he didn’t register it.

Bicycles are one of the things that are easily stolen from homeless people, as Pastor Scott Hayes has witnessed at the Vertical Center, a daytime homeless center in Newark.

“They steal each other’s bikes constantly,” said Hayes, noting that the center locks bikes while people are inside receiving services.

Many times, as Hayes described, people hide belongings in bushes or behind fences. Sometimes they put things deep enough in the woods that only they know where to find them.

More commonly, people just bring their stuff with them wherever they go. Donna Gibson, who has worked as a social worker for seven years, sees many different things crammed into people’s bags. Books, outfits, toothpaste … you name it.

“They’re gonna fight to keep it, cause that’s all they’ve got,” Gibson said. “It’s the strongest will to survive.”

Eric, who has been homeless since last September, always carries his backpack. He once got permanent housing through a program because of a health condition, but he lost the housing while hospitalized for seven knee surgeries, he said. Now Eric has to go through the whole process again by applying for transitional housing first. He applied as soon as he could, four months ago, but he is still four to five weeks away on the waiting list.

Because of his health problems, Eric has to carry various medications and reams of paperwork with him every day. He makes sure he has everything he needs and puts them in order every morning.

Eric comes to the Main Place, a mental health recovery center in Newark, every workday. He tries to help others and keep his mind busy. The Main Place offers several lockers for people to keep their things, but Eric never uses them.

“I have trust issues,” Eric said. “I feel better when things are on me.”

In a small town like Newark, most people know each other. But some homeless people, like Eric, tend to not lean on others.

“It’s like walking down the street at night, totally blindfolded and deaf, so you’re always always totally on edge,” said a man who goes by K-Dog, who lives under a bridge in Newark. “Some people are just brutal [and] hateful. If you turn your back for a moment, your stuff will be stolen or just totally ruined.”

Every day K-Dog leaves his tent with doubts about whether it will still be there when he returns. Not long ago, K-Dog’s tent was removed by government employees, according to local social service workers.

“It could be totally wiped out, whether it’s from another homeless person or the city or the police,” K-Dog said.

K-Dog and other homeless people and advocates wish there was more empathy and support for those living on the streets.