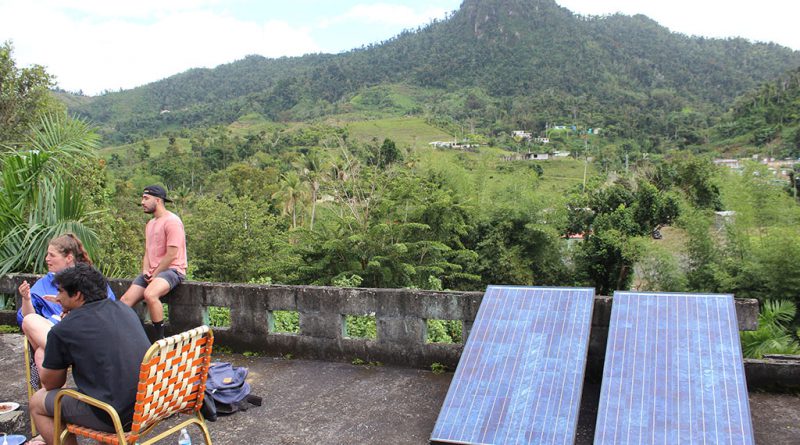 For people in the mountain town of San Salvador in Puerto Rico, recovery from Hurricane Maria was a community effort. “This community was the one that cleaned up this community after the hurricane, nobody else,” said resident Tara Rodriguez Besosa as she stood in the center of this rural town.

Besosa, a community organizer who recently moved to San Salvador after running an organic food store and restaurant in San Juan, is part of an effort to bring reliable electricity in the form of solar energy to the town.

At Casa Pueblo, a community organization in the southwestern Puerto Rican town of Adjuntas, community leaders have already taken steps to find energy independence and self-sufficiency. The organization, which rose to prominence in the 1980s following successful protests against mining in the region, has been using solar energy to power their building and others in the community for close to two decades.

Energy stability and reliability remain an issue in Puerto Rico, even more than 18 months after Hurricane Maria. In the aftermath of the hurricane, nearly all of the island was without power and recovery and repair efforts are still a part of daily life. Some experts predict that the island’s energy system is currently not prepared for another hurricane.

In response, Casa Pueblo, San Salvador and other communities across the island, have taken steps to secure their energy future and move toward solar power. These groups see energy independence as not only a survival necessity, but also as a way to gain more autonomy and empowerment on a colony where residents have historically lacked decision-making power.

Shifting from dependence on fossil fuels and a centralized grid to using renewable energy from the sun is not as simple as putting panels on the roof of a home or a business. The entire energy grid and systems need to be updated, and there is not one definitive best approach to converting to solar.

All parties involved need to weigh options and often make a tough decision about which method of solar energy production they will use. These decisions, often made separately from government efforts, can be deeply personal and difficult choices.

Most of the electricity in Puerto Rico, close to 98 percent, comes from burning fossil fuels. Maria proved that the methods of distributing that power across the island are not sufficient. The major power provider in Puerto Rico is the Puerto Rico Electric Power Authority, or PREPA.

Torres is also a research assistant with the National Institute of Energy and Island Sustainability (INESI) based at the University of Puerto Rico-Mayaguez, which works to provide frameworks for a sustainable energy transition.

He says that Maria “lifted the veil and laid bare,” all of the energy problems that the island has been experiencing for years, and that PREPA’s dysfunction has been well documented through its history.

He said that from PREPA’s early days as an energy provider to private companies like sugar plantations, to powering industrialization, to providing power island-wide, there have been consistent problems. Initially installing power lines and substations across the mountainous island was tough enough. The entire island had been electrified, and power, though sometimes unreliable, was now accessible. In the years following electrification, PREPA’s future has been unclear.

“After PREPA achieved its goal of complete electrification it’s basically been left without a goal to follow,” Torres said. “It’s main function is just to sell you energy. To make you consume energy and sell it to you. That’s it.”

The Institute for Energy Economics and Financial Analysis (IEEFA), has labeled Puerto Rico’s grid as “poorly configured” and points to the fact that 65 percent of electricity generation facilities are located in southern Puerto Rico while the majority of consumption is in the North.

This long-distance transmission was a factor in why the grid is unstable and why it took so long to restore power after the storm.

IEEFA determined that even three months after the hurricane, power could only be restored intermittently to 50 percent of customers due to “unnecessary delays, lack of coordination with national utilities and dubious contracts.”

Such history on the island, especially post-Maria, does not instill much confidence in residents. Blackouts are still a regular part of life and reliable service is not always available.

The first myth, he said, is that Puerto Rico is a blank canvas for energy investment following, Maria, as many businesses and entrepreneurial individuals say; this belief ignores a century of the island’s energy history. Even if the system could be built from the ground up after the hurricane’s destruction, there is still the unseen damage – the distrust in PREPA, past abuses of power – that persist and need to be considered.

The second myth is that Puerto Rico is a living laboratory where new technologies can be tested. Torres said that this has happened in the past with industrialization and Operation Bootstrap and even with testing of contraceptive pills. Operation Bootstrap relied on foreign investment and tax breaks to spur the Puerto Rican economy, but these companies left the island once the taxes got less friendly. The Puerto Rican people have been exploited in the past for financial and political gain and Torres said he is worried that solar or even nuclear energy could serve as the next experiment on the island.

The final myth, said Torres, was that Puerto Rico is open for business and investment. Instead of just looking at innovating and using new technologies, he said, it is also important to consider the social institutions that are part of the process. Simply building more power plants or shoring up transmission lines may alleviate physical and technological deficiencies on the island, but this still leaves residents and communities outside of the decision-making process

The government has made attempts to repair the grid and make energy transmission more reliable. By most accounts, this plan has not been effective, and Torres said past plans have lacked vision and have seen too many business, state and federal government stakeholders involved in decision-making.

Now, with seemingly no promise of assistance from the government and a grid that has potential to collapse again, local organizations are taking their own steps to secure their energy future and challenge the three post-Maria myths.

In the shift away from carbon-based fuel sources and reliance on a faulty electrical grid, different community organizations have taken the initiative to find and finance their own sources of power.

Cathy Kunkel, an energy analyst at IEEFA, said that community approaches can be an effective way to help the system.

“There’s a lot that can be done at the local level,” Kunkel said in an email. “Obviously a transition to a decentralized electricity system for the island would be faster, and less capital would be wasted on overbuilding a centralized generation system.”

One local approach to solar energy comes from San Salvador and the community’s 20-year-old nonprofit organization.

This “Piricho Power” project, named after the mountain that overlooks the town, is “a community-led community-financed, community-participatory, solar rural micro-grid,” Besosa said. The rural microgrid project is their way of becoming energy independent.

“We are developing an energy revolution, without any gunshots. Casa Pueblo, (even) before Hurricane Maria, we were breaking energy dependence,” Massol said during a presentation about the organization’s history and current work.

Following the hurricane, Casa Pueblo was able to use their solar panels to produce energy and provide assistance despite the island-wide grid being down. This meant they could independently power their radio station, which played a role in helping people communicate when no other method was available.

With the solar panels on its roof, Casa Pueblo is able to power not just the radio station but their building and a theater, and even have some energy leftover. When they make more power than they use, they are able to export some electricity back into the grid as part of a net-metering program.

Oscar Ojeda, a recent graduate from the UPR system and a friend of Javier Torres’, said that localized community approaches to solar energy may be an answer both technically and socially.

“When talking about the case of Puerto Rico, A place that is very diverse geographically, topographically, you are better off having decentralized production scattered throughout the island,” Ojeda said.

As for how to approach an energy future that considers historical context and does not exploit people, Ojeda said that understanding past relationships is important.

“You have a lot of people that have no trust for the system, and understandably so,” Ojeda said. “Since the ‘70s PREPA has been just an organization embedded with a lot of high executive corruption.”

Since implementing solar energy is a goal of local residents and the island’s government, making the panels technologically viable to supply homes and businesses with sufficient power is one of the first priorities in bringing solar technology.

Puerto Rican Governor Ricardo Rossello has laid out a plan to transition the island to a more sustainable future and articulated “a long-term goal of depending only on renewable sources by year 2050.”

Beyond making sure the systems work comes the question of who will pay for new technology. In addition to private donations and fundraising, some level of government assistance is likely necessary to help fund and incentivize solar energy.

In certain parts of the contiguous United States, programs exist that can help individuals and businesses pay for their solar technology. Some states have a number of programs and incentives to encourage people to consider installing solar energy systems.

From rebates, tax credits, net metering and grant programs, states have different ways of helping the average household access and use solar energy. Federally, there are also tax credit programs that encourage people to install solar energy systems and reward them the sooner the systems are put in place.

In Puerto Rico, the cost of installing panels is steep, and the price of ensuring the reliability of a solar system is even higher. Without increased incentives or a more cost-effective method of installing solar systems, the technology will remain unfeasible for many of the island’s residents.

Beyond community-wide and household transitions to solar energy, IEEFA calls for government assistance in making the energy transition. They say in their report outlining a path to a sustainable energy future that “Puerto Rico can become a role model for the transition to renewable energy for small island nations and a model of bottom-up transformation for communities in the United States.”

They also echo the voices of students and experts on the island who say that the transformation should be in the hands of citizens, and that energy should be a pathway towards individual, family and community prosperity.

Whichever approach is best, and wherever implementation assistance comes from, a timeline for island-wide implementation for solar energy is still in question. Community organizations, politicians and residents try to move forward while still acknowledging the key myths and lessons from the past.

Featured photo: Solar panels await installation on the roof of the home of Tara Rodriguez Besosa, a community organizer in San Salvador, Puerto Rico, on Feb. 14, 2019. San Salvador, a town 30 miles south of San Juan, was without power for more than 8 months following Hurricane Maria in 2017, and the community is looking to solar energy to help secure their energy future. (hristopher Schulz/MEDILL)