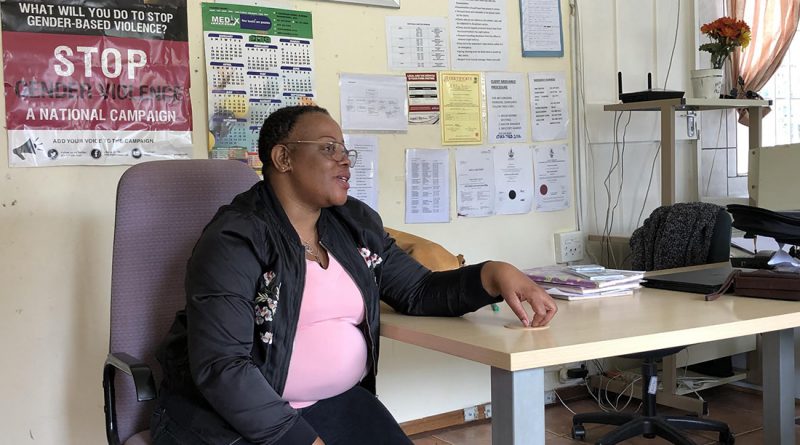 When Fifi Rage tells men that she identifies as asexual, they often tell her she has just “not met the right one.” The University of Pretoria student says men treat her sexuality as a “challenge” and tell her that they will be her “first.”

Given the prevalence of violence against women in South Africa, such statements intimidate Rage, who also identifies as African-Arabian. Women who do not conform to gender norms may be at particular risk of violence, experts say.

“I don’t usually say I’m asexual from the beginning because a lot of people don’t even know what that means,” said Rage, 20.

Rates of rape are extremely high in South Africa and LGBTQ women are sometimes targeted for what is known as “corrective” rape, where men allegedly believe forced sex can change a woman’s sexuality. Women who identify as lesbians are considered primary targets, but non-traditional gender expression broadens the number of individuals within the LGBTQ community who may experience “corrective” rape.

Cultural and social discrimination also influence the number of black lesbians who live in townships where “corrective” rape is prevalent, ActionAid stated. Women lack “sufficient support systems” and research from 2008 found that 86% surveyed from the Western Cape lived in fear of sexual assault versus their white counterparts, with only 44% expressing the same fear.

Simbarashe Honde, the producer for the afternoon drive time show “Changing Gear,” discussed with me and several other American reporters how violence against women, including “corrective” rape, is prevalent in townships. It may even end with women being murdered or mutilated.

“‘You know what? You only sleep with other women because you’ve never been with a man,” said Honde, portraying a scenario. “You don’t know how sex with a man is like. So, because of that, we will show you.’”

There is also racism to such violence and how it is seen by the public.

The media are more likely to show “white faces” affected by gender-based violence than “black faces,” said Bonita Meyersfeld, an associate professor of law at the University of the Witwatersrand School of Law. Meyersfeld said race and socioeconomic status influence how the judicial system treats all cases and that “corrective” rape is not an exception.

Meyersfeld said that if a “white, wealthy lesbian woman” experienced “corrective” rape, the judiciary’s response would be different than in the case of a transgender person of color.

Honde criticized media coverage of violence against LGBTQ people, which often blames the person who was attacked. He recalled a story that described an individual who presented as a woman as “luring” a man under false pretenses. He said lack of understanding of LGBTQ communities contributes to poor media coverage.

“We still do not understand the transsexual, for instance, in the community,” Honde said. “No one understands – it’s either you’re gay or you’re lesbian. That’s the level of misunderstanding that we have.”

These stories, Honde said, reinforce stereotypes that trans individuals misrepresent themselves. That is why, he said, authentic stories are crucial, even if they primarily focus on violence and “corrective” rape because they provide greater visibility.

Jeanette Sera, the manager for People Opposing Women Abuse, said South Africa’s patriarchal environment contributes to the fear of being perceived as homosexual. Sera, who said she grew up as a “tomboy,” became aware of systemic inequalities as a child.

“I remember this teacher saying to me, ‘Who’s going to marry you? No man is going to. You can’t do a simple thing like sewing,’” Sera said. “So, I think those things when you grow up and you think about them, it’s how we are being socialized.”

Sera added that women are fearful of expressing love for other women. She said women are taught at a young age that it is only acceptable to say that they love men.

“When it comes to ‘corrective’ rape of lesbians, in general, you find that men feel – I think it’s a fragile masculinity,” Honde said. “Where they get offended because they say, ‘These women want to be men. So, if you want to be a man, I’ll show you what a woman looks like and what a real man will do to you.’”

While in the United States public debate focuses on issues like children’s access to hormones or the conversation about gender-neutral bathrooms, in South Africa the concerns for LGBTQ people are more fundamental: simple understanding of LGBTQ issues, and the violence in the townships.

“[We should] be addressing, teaching people just to understand what the LGBTI is before we start talking about gender neutral bathrooms,” Honde said.

Violence toward women who identify as lesbians is underscored by what ActionAid describes as the heteronormativity that underpins LGBTQ discrimination. The cultural understanding is that heterosexual relationships are the only normal ones in society. Each sex must also stay within the set gender roles or risk experiencing discrimination or violence.

One Cape Town LGBTQ support group told ActionAid that they encountered 10 new cases of “corrective” rape each week perpetrated by young school boys who believed their female classmates needed to be “fixed.”

Experts call the Constitution of the Republic of South Africa among the most progressive in the world. The document was adopted in 1996 and mentions the protection of South Africans from discrimination, including on the basis of sex, gender and sexual orientation.

Protection from state discrimination does not change South African realities on the ground, though. Cultural and religious perceptions are ingrained in the collective consciousness, Honde said.

“[African countries] believe that during – they call it the ‘dark ages’ – during that period, none of [the homosexual acts] happened,” Honde said. “Which is actually, if you research, researchers have been saying that’s actually bulls**t.”

The “dark ages” reference colonialism and the belief that homosexuality is “a white thing.” Expressions of gender neutrality did exist then, though, and it was considered sacred, Honde said.

The discussion of sexuality through a historical lens within the African context is considered undeveloped. Marc Epprecht, a Queen’s University professor specializing in Africa, gender and development, and sexuality, wrote in a 2009 article for The American Historical Review that the lack of research is inhibiting.

“Timidity, whether in the form of polite euphemisms or self-censorship in deference to local taboos,” Epprecht wrote,“has demonstrably failed to reverse the spread of HIV or to deter gender-based violence, including homophobia.”

The latter, Epprecht wrote, appeared to be on the rise in African countries. The cause was stated as vocal women and sexual minorities becoming political and social scapegoats. He added that there was a continuous growing realization that “encompassing histories of sexualities” are needed, even within “hostile” environments.

The difference, then, is what is on paper and what people believe. The discrepancy affects how LGBTQ people live and any discriminatory encounters. Cultural and religious values result in some Africans believing that being gay is “not in our culture” and others believing that LGBTQ people are living in sin, Honde explained.

Meyersfeld similarly distinguishes that LGBTQ protections in the constitution and the cultural values are at odds. She referenced how LGBTQ couples can have their partners on their health insurance, yet people often refer to same-sex marriages as civil unions.

The new development, Meyersfeld said, is unique because the prejudices are not within the systems, but instead the South African communities.

Some debate whether “corrective” rape should be considered a hate crime.

The doubt appears grounded in whether rape should have different categories. These categories, some experts seem to suggest, further alienate women who experience violence.

Rape is already illegal. Action to bring about legislative changes and to extend conviction sentences, thus deterring men from committing the crimes, are ways some people believe sexual assault numbers will drop. Assault against the LGBTQ community, though, are not necessarily treated differently than other cases, Sehoole said.

Sera agreed, saying that men feel entitled to make women who identify as lesbians into “real” women or to make them behave in ways that are expected of women. She said that women who experience rape in any form, regardless of identity, deserve proper support.

Meyersfeld similarly agrees that all women deserve support, but said an important distinction must be made. Not only should “corrective” rape be considered a hate crime, but so should violence against women. “Corrective” rape, she said, is a violent act that produces “two fault lines of discrimination.”

The idea that someone thinks they can fix another person, and how that can create a belief that there is something wrong, is a violation, Meyersfeld said.