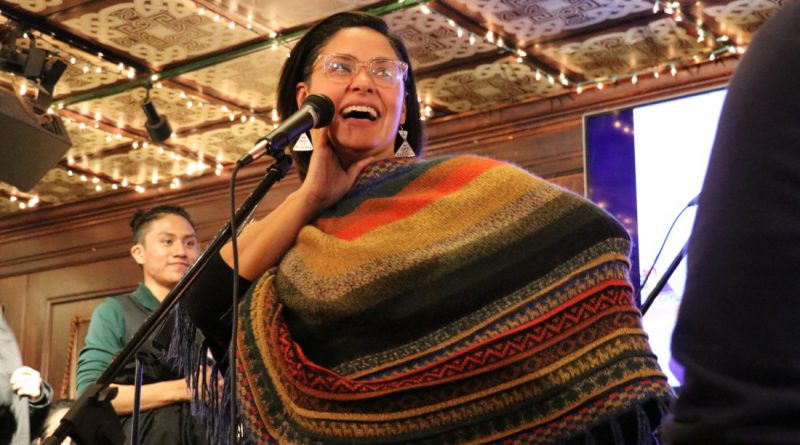 At a watch party on election night in the back room of Chief O’Neill’s pub in Avondale, a group of nearly 100 people wait.

Live music from a local band fills the room as people socialize, drinks in their hands and enthusiasm in the air. Like many other watch parties throughout Chicago’s 50 wards on Tuesday, February 26, this group intently waits on a candidate and an announcement.

The candidate who brought them all together is Rossana Rodríguez-Sánchez,  a youth educator who is running to become the next alderman of the 33rd Ward.

Arriving just before 9 p.m., Rodríguez-Sánchez, 39, is greeted with cheers, applause, and hugs. With a smile across her face and tears in her eyes, she slowly makes her way towards the front of a small stage tucked in the corner of the room. She greets everyone on her way.

People crowd around her, laughing, cheering, clapping, and dancing too. And yet, no one seems as excited as Rodríguez-Sánchez herself, unable to keep a smile off of her face.

A longtime friend and former co-worker, Benjamin Serrano, hops on stage to remind Rodríguez-Sánchez and her room of supporters that they all have a lot to be happy about on this cold Tuesday evening.

“We have come so far in this fight to come to this point,” Serrano says. He has been with her campaign since the beginning. “I am proud to announce that, with 92 percent [of the precinct votes reported] Rossana Rodríguez is in the lead!”

She has 42 percent of the vote, beating two other candidates.

The crowd breaks into a loud applause, realizing she is headed to a runoff with incumbent Deborah (Deb) Mell on April 2.

Serrano calls Rodríguez-Sánchez on stage and hands her the mic.

“Part of being a leader is I should know what to say,” Rodríguez-Sánchez says before laughing. “There are so many things in my heart right now.”

Born in Humacao, Puerto Rico, Rodríguez-Sánchez migrated to the U.S. in 2009 amid the island’s growing economic and debt crisis. She has lived in Albany Park—a community that is part of the 33rd Ward—ever since. A community activist and former director for the Albany Park Theater Project, Rodríguez-Sánchez is seeking to unseat the ward’s incumbent Deb Mell, who has close ties to Chicago’s Democratic machine. She was appointed to the City Council seat long held by her father, Richard Mell, by Mayor Rahm Emanuel in 2013.

Rodríguez-Sánchez applauds her supporters and highlights the significance of the current moment.

“We are in the first runoff since the 1930s in the 33rd Ward with a Latina running in a ward that is 52 percent Latinx,” she says. “We just hammered the machine!”

She describes the campaign as “the legacy” of these leftist activists. “This campaign is an example of what we can do together if the left comes together,” she says “and what does it look like? It looks like we can f***ing win!”

Rodríguez-Sánchez is one of five socialist candidates who could potentially join the City Council this spring. Two of them have already won their spots and three, including Rodríguez-Sánchez, are headed into runoff elections.

She tells the crowd that she couldn’t have done it alone. “We know that when we get that seat, that seat is for all of us. We are the people and we are getting an office for the people.”

And she makes sure to re-center everything they’re fighting for as she speaks: a livable wage, jobs with benefits, fully funded neighborhood schools, mental health services, and a “f***ing public health approach to safety because we are not just going to continue to just throw the police at people of color in this city!” she says. “We can smell and we can taste what a city for the many is going to be like. It’s so close.”

Featured photo: Rossana Rodríguez-Sánchez addresses a room of supporters after learning that she is heading into a run-off election against incumbent Deb Mell in April. (Justin Agrelo/Medill)