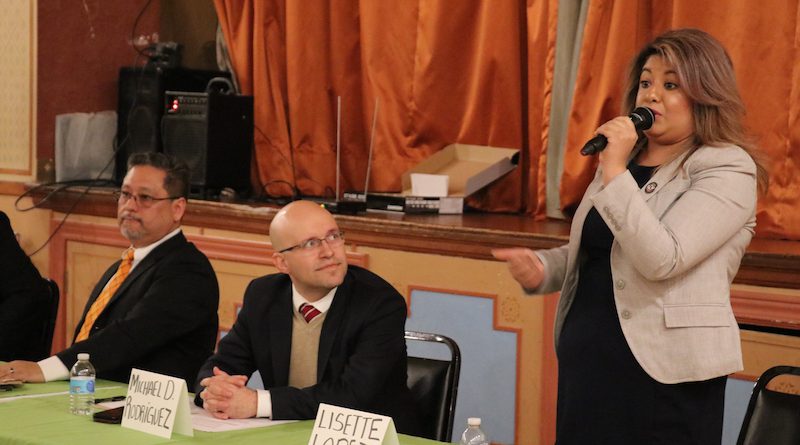 After 25 years of serving the 22nd Ward, Ricardo Muñoz announced that he would not be seeking re-election in the next aldermanic election on Feb. 26.

His stepping down opened the door to new candidates: Lisette Lopez, Neftalie Gonzalez, Michael Rodriguez and Richard Juarez are all running to lead the 22nd Ward, which covers the neighborhoods of Little Village, South Lawndale and Archer Heights.

One of the major concerns for the ward is fostering opportunities for youth in the community.  Gang violence prevention, civic engagement, creating safe spaces and the creation of jobs would minimize the 81 percent unemployment rate for 16- through 19-year-olds living in the area, according to data mentioned by Jackie Serrato, journalist and moderator at the aldermanic forum hosted by independent and community organizations Vota Con Ganas, Little Village Environmental Justice Organization (LVEJO) and neighbors of the community, on February 5.

Candidate Lisette “Liz” Lopez, outreach director of a primary health clinic serving older adults, mentioned that she would like to teach young adults how to write a resume and create an internship program for the  youth to gain experience from their workplace.

“One of my ideas, a plan I want for the community, is to work with all the businesses and  organizations to focus specifically on [youth], open the doors and make an internship program. We must give opportunities so they can have that experience. Like a first generation [student graduating] from university, I didn’t know where to go or what to do.” said Lopez.

When asked about his plans for youth engagement in the community, candidate Richard Juarez responded, “We have so many talented men and women in the arts [and] in technology that is way beyond me. What I want to bring to our community is a school that we would have recording studios, right? [With] sound [and] visual. My children are artistic, they are musicians. I want to bring opportunities like how we say in Spanish to ‘desarrollar’ [develop].”

“I’m going to look for money, not only at the city level but the federal, state and private investors. So that we could invest back into the community.” Juarez added.

Neftalie Gonzalez is running for the third time in the 22nd Ward, and says he has been focusing on jobs for youth for the last 10 years.

“My organization, Opportunity-Oportunidad, that came out three years ago, focuses on helping our youth that sometimes need a direction because they don’t even know where to apply. So there’s a lot of opportunities — It’s just that we need to tell them where to get it. Give [youth] the motivation.” he said.

Enlace Chicago hosted a 22nd Ward Candidate Forum at Little Village Lawndale High School (LVLHS) on Feb. 21. There, many residents, including over 60 teens, voiced their concerns about their community.

Ruben Morado, a teacher at World Language High School on the LVLHS campus, saw the forum as a great opportunity to inspire students to become more involved in civic problems within their community.

“I want the [future] alderman to know that we are creating civic-minded individuals that will not only live in the ward but will also participate. And he/she needs to be conscious of that because I believe that the World Language students, as well as students from the rest of the campus, will pay attention now and will hold them accountable for the decisions they make in the future,” said Morado.

Many residents of the 22nd Ward took advantage of the aldermanic election to speak out about what they hope their beloved neighborhood will become.

“I’ve always dreamed that we’d have a big club here, like for example on Kedzie & 31st, where the school was, for all the youth that are growing up in the middle of where the gangs are. There could be places there where they could learn to swim, to play the guitar, so they could push forward — including learning how to construct houses! — to learn how to be better people and better citizens,” said Irma Ruiz, a resident of Little Village for over 40 years..

The election also stirs up concerns about gang activity in the community and how to approach teens who are already involved.  Residents suggest that the creation of jobs or after-school activities would decrease the number of teens who are initiated into gangs and prevent gang violence in the community.

“Many times, the people who are in gangs are there because they have psychological problems, family problems, problems that they can’t handle.” Andrade said.

This story was produced as a partnership between Yollocalli Arts Reach and Medill.