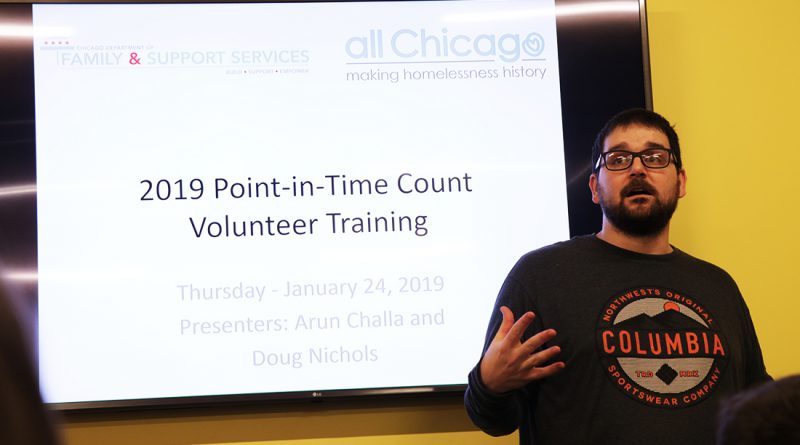 By Kimberly Jin and Lu Zhao

Shivering in the icy wind, he stood alone on the refuge island at the crossroad of West Cermak Road and South Clark Street. In the pitch darkness, the middle-aged man was barely visible under a dim streetlight.

Being first-time volunteers for the annual count of the city’s homeless, we hesitated about how to approach him. But on a quiet winter night with little traffic, he easily noticed us and ran across the street towards us.

The dusky streetlight illuminated his thick gray beard, and his face hidden under his the dark blue hood. We tried to explain we were collecting data on the homeless for the city, but he seemed perplexed, making a hoarse sound. He raised a hand to point at his ear and slowly shook his head.

“I’m deaf. I’m homeless,” read a sign he held in the other hand.

Luckily, one volunteer on our team knew a little bit of sign language. With his help, we learned that the man came from St. Louis and has been homeless for one year.

It was 11:26 p.m. on Jan. 24, the coldest night so far in January. Without gloves, we felt the pain from fingers exposed to the cruel wind.

Together with two other volunteers, we were out driving and searching for people living on the street in downtown Chicago from 11 p.m. to 1 a.m. for the 2019 Point-in-Time Count of Homeless Persons, a census held annually in cities nationwide since 2005. Chicago’s count is organized by the Department of Family and Support Services (DFSS), and is meant to understand the homeless population in Chicago during a few hours on one given night in January. The data is used to guide federal funding, homeless services and resource planning.

Many non-profit communities use the Point-in-Time data as a reference to discuss and address homelessness, said Evan Cauble-Johnson, the chief development officer of Inspiration Corporation, a Chicago-based social enterprise that helps homeless people find housing and jobs.

“It’s helpful insofar as it gives us the ability to determine how many folks are out on the streets or in shelters,” said Cauble-Johnson, who has participated in the count as a volunteer about three times. “Without the PIT count, we’d have very little information about what’s going on with homelessness.”

However Julie Dworkin, the director of policy at the Chicago Coalition for the Homeless, said the survey is inaccurate, during an interview with WBEZ on the morning of that day.

“(Volunteers) actually try to do a visual eyeball count of people, which you can imagine is a very difficult and inaccurate way to really capture the problem,” Dworkin said.

According to the 2018 Point-in-Time survey, there are 5,450 homeless people in Chicago, based on what the U.S. Department of Housing and Urban Development (HUD) defined as “homeless” – people who live in a place not meant for human habitation, in emergency shelter, in transitional housing, or people encountered exiting an institution where they temporarily resided.

The Chicago Coalition for the Homeless estimates there are over 80,000 homeless people in Chicago,  including the “doubled-up” population who live with others without their own houses, a different definition from what HUD uses.

Where to find them — this was the biggest question for us that whole night. During the two-hour search, the deaf man from St. Louis was the only homeless person we found. That could be seen as a relief since it hopefully meant fewer people were outside suffering from the cold. But it also unsettled us that we might miss someone, since we didn’t know clearly where to find them.

And that was not our only unanswered question after a training session conducted earlier that night.

The session was delivered on the fourth floor of Renaissance Social Service at 2501 W. Washington Blvd by two staff members from All Chicago, a non-profit organization addressing homelessness in Chicago. Around 50 volunteers gathered and prepared for conducting the count downtown, one of the 10 sites across the city.

Volunteers were divided into groups after the training. Each group of three or four people was assigned an area within downtown.

We got three maps – two in Chinatown, one in Goose Island – that were far away from each other, making it almost impossible for us to thoroughly search the area within the time limit.

“It’s my first time to do this much,” said T.J. Thomas, one of our group members who has volunteered for the count for eight years.

“House,” we showed him the card and numbers on it. “You!”

“Me home?” he stared at us unbelievably.

“Yes,” we pointed to the number again. “Call them.”

“Oh, house!” He nodded his head heavily, his face seeming to show joy.

We were not that happy. He could call the number, but it is doubtful whether he has a phone. Even if he calls, he would not be picked up on the street; he would need to go to a police station or an emergency room and might face a long wait there. The nearest police station was one mile away.

We knew clearly how far away he was from a home. He didn’t seem to know that. He gave each of us a big hug.

Featured photo: The 2019 Point-in-Time Count volunteer training started around 10 p.m. on Jan. 24, which lasted near one hour. Arun Challa and Doug Nichols (shown in the picture), two staff members from All Chicago, conducted the training. (Lu Zhao/Medill)