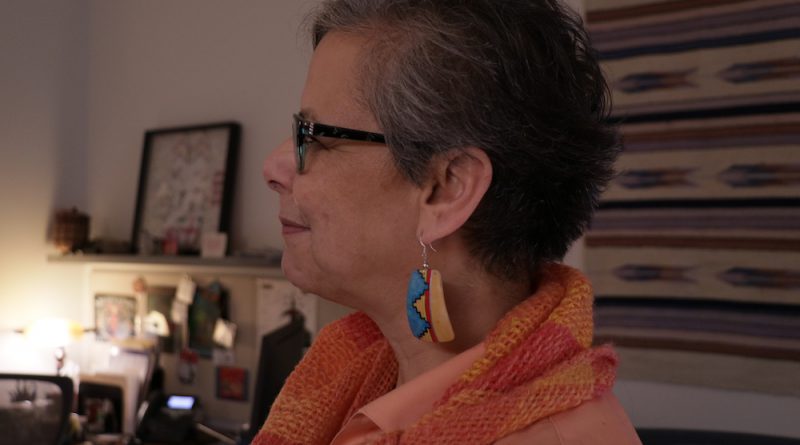 It was a shock for Pam when she first learned she is a Native American. At eight years old, she was transferred to a new school. Huddling in a chair, sitting beside her younger sister, she felt insecure and embarrassed. When the teacher introduced this new student as an “American Indian,” Pam couldn’t believe what she heard.

“What? Why did she say that? I didn’t do anything!” Pam says she thought to herself. “I saw on TV, they’re all naked and crazy!”

Pam went home upset. She asked her foster mother why they called her Indian at school.

“Well, you are,” her foster mother said. She took out an encyclopedia, went to the American Indian section and showed Pam a picture of a man with a big headdress on a horse. “You’re an Indian.”

“You are Menominee and you are Oneida,” Pam’s older sister said.

Pam had to write down the tribe names but didn’t even know how to spell them at that time.

Menominee and Oneida are two Indian tribes among 573 federally recognized ones in the U.S., according to a published list from the Bureau of Indian Affairs. Each tribe sets its own requirement for tribal membership. Generally speaking, a person can only be a member of one tribe even if they meet the qualifications of more than one Indian nation, according to a research paper by Carol N. Neptôn.

Pam’s mother is Menominee and her father is Oneida. When Pam was little, her mother enrolled her in Menominee. Now she is an active member of Menominee and serves as the coordinator of the Menominee community in Chicago. Yet when Pam became a mother, she decided to enroll her children in the other tribe – Oneida.

“My bloodline is stronger on the other tribe,” explains Pam, now in her 50s. “My father was a pure Oneida but my mom wasn’t a hundred percent Menominee.”

Jasmine, 32, Pam’s younger daughter, grew up to be proud of being a Native American. Attending community events, learning culture from an after-school program and doing cultural practices, she knows clearly who she is and hardly feels insecure.

Jasmine was the only Native student in the classroom throughout almost her entire student life, and she saw huge differences between other students and herself.

“The biggest difference is the invisibility,” she says. “It’s just you need to explain that we’re still around.”

Jasmine was once asked in college whether she lived in a teepee (also spelled as tipi, a cone-shaped tent). She answered no and explained, “I live in one of the dorms. Downtown.” A voice in her mind said, “What the heck the kind of question is that?”

Still, the identity of Native Americans is not that easy to understand, even for Jasmine’s friends.

“Why are you Oneida?”

“Because my mom is Oneida.”

“But why doesn’t she practice it (as Oneida)?”

Jasmine had no answer. She turned to Pam to ask why.

Pam never thought that way. So she replied, “Yes, I will (practice as Oneida).” She goes to the longhouse, a type of building that Oneida are known for; wears the regalia, a kind of special dress; respects Oneida culture. But she can’t participate in Oneida politics since she isn’t enrolled as a member. So Pam encouraged Jasmine to learn more about the Oneida community as a voting citizen in Oneida.

She tries to learn the totally different cultures and languages from both communities and pass the knowledge to her children even though they can’t be enrolled in any community.

Jasmine’s husband is Ojibwe. As a result, their children don’t meet the blood quantum requirements of any of the three tribes — even though it is only 1/64 shy of the qualification of Ojibwe.

“It’s frustrating to me that it’s a system that was initially imposed by the government, and now the tribes are the ones who are reinforcing it,” Jasmine says. “Like we’re doing this to ourselves now.”

Shannon Keller O’Loughlin, the executive director of the Association on American Indian Affairs, explained that blood quantum has been used as part of the determination of membership by some tribes, but it is not used by all Native nations.

“Blood quantum was a racially based classification that the United States, the federal government and probably other colonial governments used against indigenous people in order to assimilate them into the broader society,” O’Loughlin says.

She also says that intermarriage is very common in Native nations.

“Indian people have been married to each other from different tribes for as long as ever,” she says. “That doesn’t make us less Indian because it’s not about race … it’s about culture and it’s about a political category.”

Though Jasmine feels negatively about the system, she raises her children as Native Americans and gave them middle names in Native languages: Wiishkobi in Ojibwe means sweet and Enaemaehkiw in Menominee means thunder.

“They are Oneida, Menominee and Ojibwe,” Jasmine says. “Even though they are not officially recognized by the tribe as citizens.”

Featured photo: Pam is wearing earrings made from gourds. Her scarf is dyed with sunflowers, which represent sunshine, the meaning of Pam’s Native name. Photo: Lu Zhao/Medill