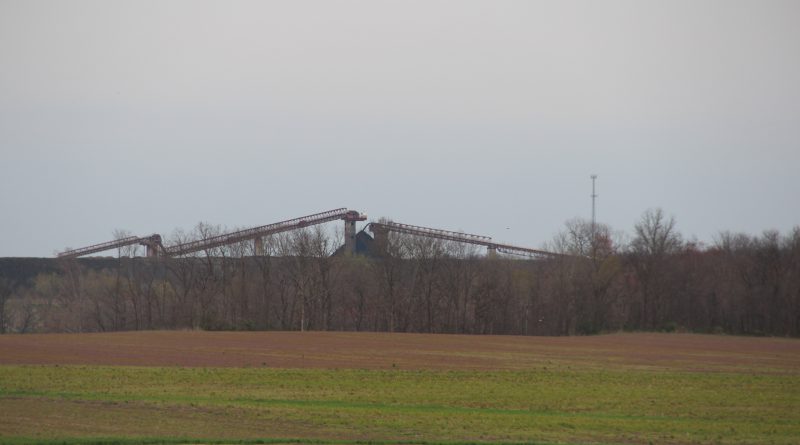 Republicans and Democrats were both able to find provisions to love in the act, which requires the state to add at least 4,300 megawatts of solar and wind power in Illinois by 2030. The requirement is expected to stimulate investments in renewable energy and, as a byproduct, job creation. FEJA also subsidizes nuclear-energy sources — a provision touted as one that would “save” thousands of existing jobs.

“It’s wholly bipartisan,” said Hud Englehart, spokesman for former Gov. Bruce Rauner, who was in office when the bill passed.

Meanwhile, as coal and clean energy sources have been pitted against each other in the national debate, the state’s aggressive pivot to renewable energy will leave the state’s fruitful coal industry, for the most part, unaffected. That’s because most of the coal Illinois produces — 48.2 million tons of coal in 2017, according to the U.S. Energy Information Administration, the fourth highest in the country — gets exported to other states and countries.

The number of coal mining jobs in Illinois has dropped in recent decades in large part because of increasing automation of coal mining. But the few thousand remaining coal-mining jobs across towns such as Harrisburg, Benton and West Frankfort stand to survive so long as demand for coal holds out elsewhere. FEJA is the least of coal workers’ worries, according to coal- and renewable-energy advocates.

The 2016 act’s mandate for renewables without burdening the coal industry is a useful selling point, especially at a time when President Donald Trump has championed himself as a defender of the blue-collar workers and described a “war on coal.”

Phil Gonet, president of the Illinois Coal Association, said about 85 percent of the state’s yearly production gets exported via the Mississippi and Ohio rivers. “A lot of coal goes to Ohio,” he said.

Because of Illinois’ export volume, he said he doesn’t expect to see FEJA have an immediate effect on the industry.

“It’s probably going to take a long time before it even has a modest impact,” he said.

Still, Gonet said he couldn’t see renewables sustaining the state’s energy needs in the long term. About 40 percent of the state’s electricity is produced by burning coal, according to the EIA. Because solar and wind energy require sunshine and wind, respectively, they aren’t as reliable sources of power, he said.

“When I see goals of being ‘100 percent renewable,’ my question is, ‘How are you going to do that when your resources don’t run 24 hours a day, 7 days a week?” he said.

His skepticism is far from uncommon. But when the sun doesn’t shine or the wind doesn’t blow, energy grids have technology that enables them to quickly draw from more distant wind and solar rigs or from other power sources like hydroelectric or natural gas, according to the Union of Concerned Scientists. Energy from solar and wind can also be stored in batteries and tapped when needed. And developing and installing wind, solar, grid and battery technology can be a major source of jobs, advocates note.

Already, in rural Illinois, there are nearly nine times the number of jobs in renewable energy than in fossil fuels, according to the Natural Resources Defense Council.

Ronnie Huff, a retired coal miner, spent nearly 30 years in the Zeigler No. 11 mine — now called Gateway — in Randolph County, about an hour’s drive southeast of St. Louis.

“I can see the mine from my house,” said the 60-year-old, an international representative for the United Mine Workers of America and an executive board member at the Illinois AFL-CIO.

Huff spent most of his years at Zeigler as a continuous miner operator, maintaining the conveyor belts that moved the rock throughout the mine. He blamed cheaper natural gas and regulations for the coal industry’s downfall nationwide, and said the pollution narrative unfairly targets coal mining.

“They’ve dumped all of this on one industry, the coal-mining industry, and that’s wrong,” Huff said. “It’s just a part of what’s wrong with our environment. Look what’s being put out by every vehicle.”

The Future Energy Jobs Act has had little tangible effect on Illinois coal mining, Huff said. But he said is worried about the state of the industry in general.

FEJA includes $30 million for solar and wind job-training for workers looking to transition from the fossil-fuel industries.

The Illinois Solar Energy Association says the training will take place across the state, “so that all residents in Illinois, including low-income households, returning citizens, foster care alumni, and environmental justice community residents, have an opportunity.”

But Samuel Garcia, the NRDC’s Midwest Climate & Clean Energy fellow, expressed concern that the bulk of the training programs would occur in Cook County.

“It’s something we’re concerned about and working towards,” Garcia said.

Huff scoffed at the notion that training former coal workers in renewable energy would help alleviate the problems resulting from the coal industry’s decline.

“That’s crap,” Huff said of FEJA’s job-training provisions. “What are you going to do with a guy who’s 58 years old, who’s worked in the coal mine for 28 years … How are you going to re-train him to make that kind of money to support his family in southern Illinois?”

“Granted, I’m talking about union mines here,” Huff said. Because he worked for a union mine, he retired with a pension in 2002 at the age of 46. Today there are no union mines in Illinois, and mining wages and benefits are lower than in decades past.

Huff added that younger generations of coal workers could perhaps benefit from the training.

Garcia acknowledged that geography could be a stumbling block in reaching every coal worker who wants to transition to renewable energy.

“It’s difficult even with mass job creation resulting from a bill like FEJA to have a one-to-one translation, ensuring that former coal employees are getting these jobs,” Garcia said.

Changing an economy once dependent upon coal to one that is reliant upon renewable energy is bound to cause growing pains. Germany has tried for the better part of two decades to make the shift, but has repeatedly missed key deadlines and caused hardship among residents in coal towns. In June, Chancellor Angela Merkel set up a task force to try to determine the country’s next steps for its phase-out.

Operating on a smaller scale, there are some organizations in Illinois aiming to help coal communities survive the evolving energy landscape.

In particular, that group’s Community Futures Initiative is advocating the implementation of a severance tax on coal shipped out of the state, given that so much of Illinois’ coal is indeed shipped to other states. Many other states have such taxes, but Illinois does not.

“This is a small fee paid by coal companies to ensure that when the coal leaves, the community has revenue to invest in education, job training, and infrastructure improvements that help hard-working families get ahead,” according to the group.

Illinois subsidizes the industry by providing tax credits to investors and awarding grants to coal companies. Eco-Justice Collaborative argues that the state could invest its money in coal communities in more productive ways, and cites a report by a tax and budget watchdog group that says supporting coal Illinois cost taxpayers an estimated $20 million in 2011.

The Sierra Club’s Beyond Coal campaign is trying to envision a coal-less future for the country. Its Central Illinois Healthy Community Alliance routinely hosts informational sessions about alternative energy sources, hoping that residents of Illinois towns long-dependent on coal might envision a different energy future.

“We’ve created 20,000 jobs in wind and solar power in Illinois in just the last few years during a very difficult recession,” Jack Darin, director of Sierra Club Illinois, says in a Beyond Coal campaign video. “We can do a lot more of that if we all follow the lead of our neighbors in these cities who are buying 100 percent renewable energy.”

Featured photo: The processing plant for a coal mine in Southern Illinois. Photo by Kari Lydersen