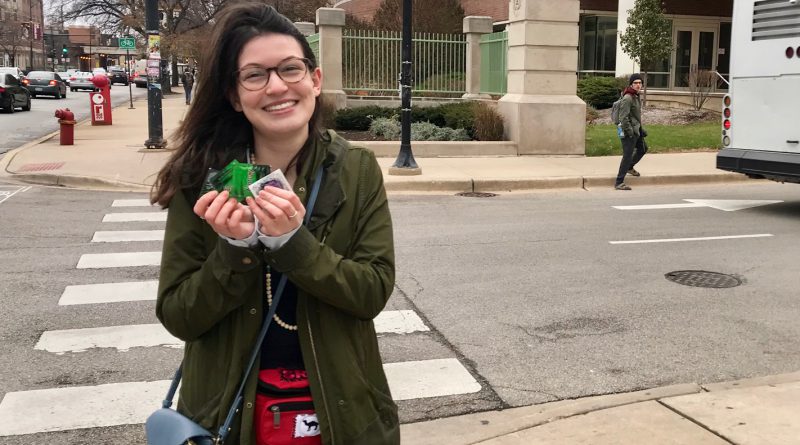 On a blustery day in November, three student activists stand at the intersection of Kenmore Avenue and Sheridan Road across the street from Loyola University. One, Amy Al-Salaita, stands up on a curb yelling “free condoms!” while another, Zoa Glab, shivers in a coat too thin for the biting wind. Still, she politely asks everyone who walks by, “Would you like a condom?” — as if she’s passing out hors d’oeuvres. The third student, Lauren Morrissey, pulls her sleeves over her red and chapping hands but makes sure everyone can still see the bright blue Trojans she’s holding.

They area all part of a group called Students for Reproductive Justice– known as SRJ– and they stand on this Rogers Park corner every Friday afternoon from 12:20 to about 12:40, a 20-minute time slot when hundreds of Loyola students are guaranteed to pass by as they switch classes. On an average afternoon, Morrissey estimates that they pass out 300 condoms.

The SRJ members are careful not to step onto Loyola’s actual campus, since there they become subject to Loyola’s solicitation policy, which states that the university can “cancel or prohibit any solicitation activities if the activities… do not align with the values of the University’s Jesuit, Catholic mission.” SRJ members say the university told them condoms are contraception and contraception conflicts with Loyola’s Catholic mission.

Most other universities across the United States– one study estimated 85 percent– provide condoms to their students. The SRJ members want Loyola to join that number.

“We fundamentally believe that even though we go to this Jesuit Catholic school, everybody here deserves fair and equal access to reproductive health care,” Al-Salaita said. “We’re just not getting that here and that’s why we organize.”

Even though SRJ members have found a way around the university’s policies, they still feel Loyola impedes their work. They can’t access university funds, they’re not listed on the campus website of student organizations, and they cannot independently hold events on campus. And philosophically, they argue that it’s important for Loyola to recognize reproductive justice as an integral part of social justice– a principle the Jesuit school embraces when it comes to other topics like immigration or the environment.

The group’s commitment to giving Loyola students reproductive healthcare products and referring them for services has put them at odds with their university over the past two years and set them, along with similar student groups at other Jesuit Catholic colleges like Georgetown and Fordham, at the crux of a national debate: What are the rights of individual students on religious campuses and what are the rights of religious universities to impose their institutional values on the student body?

SRJ’s main activities consist of supplying students with products and referrals to services that the university doesn’t provide. On Friday afternoons, they hand out free condoms donated by places like The Great American Condom Campaign. On Wednesday nights, they deliver condoms, dental dams, and lube to the residences of anyone who messages them (primarily Loyola students) through an anonymous delivery service called “TxtJane.” And they refer students to clinics like Planned Parenthood and Howard Brown Health Center for services like birth control prescriptions, emergency contraception, and abortion services.

SRJ’s run-ins with the administration started in September 2016, when they were handing out donated condoms on campus.

Just a week or so earlier they had distributed condoms on-campus without any problems. But on this day, campus safety officers approached the activists and told them to leave or they’d be sanctioned for violating the solicitation policy, founding members Alaina Dulecki and Christina Frasik both remembered.

Ellie Molise, another founding member of SRJ, recalled the event differently. She remembered campus safety being nearby during the event, but ultimately said the Dean of Students at the time, K.C. Mmeje, told the activists they were violating the solicitation policy and needed to leave the campus. She remembered Mmeje saying that the activists would need to submit a request to his office in order to solicit condoms on campus in the future.

Frasik and Dulecki also recalled this statement by Mmeje. Molise said they had hope that if they followed the rules properly they’d be allowed to pass out condoms in the future, but also recognized the possibility that they wouldn’t due to Loyola’s status as a Catholic campus.  Still, the activists wanted to show that they’d gone through all official routes before taking no for a final answer.

A couple weeks later, during a meeting with Mmeje and others from the dean of students office, Molise, Dulecki and Frasik all recalled Mmeje telling them their request was denied. Frasik said, “We asked about the status of that form and the dean of students basically turned to us and said, ‘Oh, no, you’re not in compliance with Catholic values, so you’re never going to be granted the right to solicit on campus.’”

Mmeje’s office cancelled a planned interview for this story and then did not respond to requests to reschedule or for comment.

Around the same time they were seeking permission to hand out condoms on campus, the activists were deciding if they would become a registered student organization– an RSO. As an RSO they could reserve space on campus for meetings or events, and receive funds from the university. But as an RSO they’d also be subject to Loyola’s restrictions on student organizations, which are laid out in the school’s Student Organization Handbook. The 2017/18 version states that Loyola can determine the “content” of material distributed or actions taken by RSOs, and that the university can “deny or restrict the activities of student organizations.”

Frasik said university officials told SRJ that if the group became an RSO, they could hold meetings where they discussed reproductive justice, but they couldn’t put those beliefs into practice: no condom handouts or connecting students with reproductive health services. Dulecki echoed her point: “Basically all the things that are fundamental to who we are would not be allowed.”

They decided against registering, but they are still pushing to change Loyola policy. One of their main goals is to get their university to provide free condoms to students in the wellness center. Of the 28 Jesuit Catholic universities in the U.S., not one provides condoms in their wellness center, according to my phone survey of all of them. The receptionist at Loyola Marymount’s wellness center said “No, it’s against the policy.” At the University of Detroit Mercy, the receptionist said, “This is a Catholic university, so we do not promote any of that.”

Cristina Traina, professor and chair of the department of Religious Studies at Northwestern University, explained that the traditional Catholic stance sees handing out condoms as “an endorsement of a kind of sexual behavior that the Roman Catholic church opposes.” She continued, “There’s the prudential response, which is if people are doing it anyways then ought’n we want to contain the damage? The response to that is, but then are we morally participating in evil? Aren’t we facilitating evil and aren’t we then sinning because we’re helping other people sin?”

SRJ’s relationship with Loyola’s wellness center is tense. When the activists sought a meeting with the wellness center last summer, Morrissey said she actually felt threatened by the response. Morrissey sent a message to wellness center director Joan Holden asking to meet, Holden responded that if the meeting were to take place she would invite Janet Sisler, the former director of a university scholarship program from which Morrissey receives money.

As a scholarship recipient Morrissey said she felt “nervous and scared” by Holden’s email.  The meeting took place without Morrissey present– she was still home in California for the summer. When I asked Dulecki, who attended the meeting (and uses the pronoun they), why they thought Sisler had been invited, they said,  “her function at the meeting was to be an intimidation factor” to Morrissey.

Sisler cancelled an interview for this story and then Loyola said she was unavailable to comment. Holden did not respond to multiple requests for interviews but said in a statement: “Janet Sisler was invited to the August meeting in her capacity as a member of Loyola’s Community Coalition on Gender-Based Violence.”

When Dulecki and Frasik– two of SRJ’s founders– worked as Resident Advisors, or RA’s, they said they feared retaliation for their activism, though neither experienced any specific retribution from the university.  When I started to ask Dulecki, “Did you ever worry–” they finished my sentence: “That I was gonna lose my job? All the fucking time.” Frasik echoed Dulecki’s worry, saying, “There were moments where we had to say, ‘Is this worth losing our jobs over?’”

Even though Loyola is a Jesuit Catholic university, many members of SRJ attend Loyola for reasons that have nothing to do with Catholicism. Glab and Al-Salaita both received good financial aid packages from the school. Morrissey was drawn to the university’s social justice mission. And Dulecki wanted to go to school in Chicago.

When asked about the potential criticism that these students are naive for coming to a Catholic university and demanding condoms, Traina said, “In one sense it seems naive, but this is a moment in Roman Catholicism in which there are a lot of needs for reform, and so people with a reforming spirit are not necessarily going to avoid a Catholic school. They might actually go ahead and seek one out because they want to be part of the reform.”

James Halstead, a Roman Catholic priest and professor of Religious Studies at DePaul University, also didn’t think the students were naive. He said, “No, you think, ‘I’m 18 to 22, I’m an adult. I can do what I want with my life, with my body, and so I should be able to do this.’” But, he continued, “You surrender some of your individual freedom” when you enroll at a private, religious university like Loyola. “If you don’t like it, leave. Or stick around and work for social change,” he said.

Halstead said that universities have a right to their “institutional identity” and to make policies that create and preserve their “institutional integrity.” Students might not agree with the policies, and they certainly have a right to organize and protest to change them, but they do sign on to abide by the rules when they enroll at that university, he said.

Traina said the “if you don’t like it, don’t come here” argument has some precedent, but that “universities are supposed to be institutions of critical inquiry.” And if critiques of policies are censored, “then there’s an issue.”

“You can hope that [students] have come to a Jesuit university because they embrace certain values,” she continued, but that perhaps these students are “embracing those values in a different mode.”

For some SRJ members, the university’s insistence that contraception and abortion are anti-Catholic isn’t a fair interpretation. They argue that reproductive justice is a fundamental part of Jesuit social justice and that the university’s restrictions both on reproductive health services and on student organizations run in opposition to Loyola’s brand as a social justice school. Al-Salaita called Loyola’s approach to social justice “diet activism.” “They have this very light, airy social justice definition where they encourage you to care for yourself and care for others, but they don’t actually put that into practice,” she said.

Glab, who was raised Catholic but no longer identifies with the religion, said, “As a part of reproductive justice and as a part of the Jesuit mission we believe in caring for the whole person, the whole self– that includes mentally, spiritually, and reproductive wise.”

Even if they’re not going to convince the Catholic church to change its stance on abortion and birth control, the activists argue that the school should serve them. “We pay to go here. That is our money. We should see the change that we want to see on campus,” Morrissey said. Referring to the university she continued, “Without us, you wouldn’t exist.”