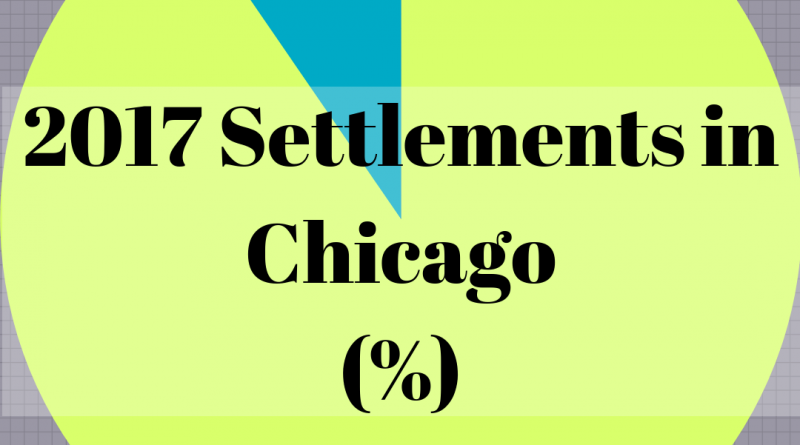 Chicago has a problem with police violence, and it’s costing the city and taxpayers a lot of money. But some people are also making money off police brutality. While much discourse about police reform focuses on the emotional and physical effects of such abuse, the financial incentives that enable it are less often explored.

The Action Center for Race and the Economy (ACRE) is trying to close this information gap, said research director Carrie Sloan. ACRE is a non-profit organization that partners with local organizations across cities in America to study the intersection of race and the economy, according to their website.

In an in-depth report, Sloan and ACRE research analysts Alyxandra Goodwin and Whitney Shepard wrote about how much Chicago and other cities spend on settlements related to police misconduct and how these settlements in turn benefit Wall Street firms. While investigating what they called “police brutality bonds,” ACRE selected five cities with high rates of police-related settlements and found that Chicago had the highest amount of spending on settlements.

According to data provided by Goodwin, Chicago spent around $413 million on police-related settlements from 2011-2017, averaging out to approximately $59 million a year.

According to Goodwin, these settlement expenses impact the entire city budget.

“When they [City Council] are looking to make cuts, the social safety nets are the first to go,” she said. In Chicago, Goodwin continued, these “safety nets” have been things like public education and mental health services, which both experienced major cuts under Mayor Rahm Emanuel, who has been in office since 2011.

Emanuel has been criticized for his policies that have negatively impacted Black and Hispanic communities in Chicago, including his handling of police misconduct and related settlements that disproportionately impact these communities. Yet, when it comes to negotiating and paying for settlements for police misconduct, multiple official entities are involved.

The Chicago municipal budget has a line item for legal settlements, and as data obtained by ACRE shows, every year between 2011 and 2017, the city’s settlements exceeded their budget amount substantially. When the city exceeds their budget, they often take out bonds, which are essentially loans issued to governments that accrue interest.

ACRE’s study found that police-related lawsuits made up by far the largest amount of the city’s legal settlements. 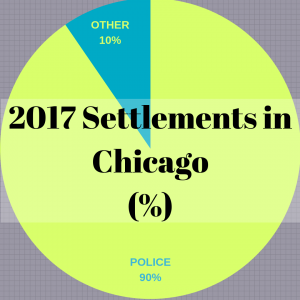 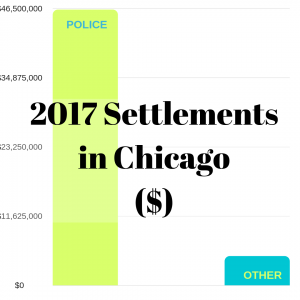 ACRE did case studies on five cities which have seen rampant allegations of police misconduct and brutality. Of these five, Chicago was the only city not to distinguish between police settlements and other settlements in data provided to the public. These charts use data from Alyxandra Goodwin, who did careful analysis of the city’s data to determine which settlements were for police related cases. (Javanna Plummer)

To pinpoint how much of the 2017 settlement budget went to police-related settlements, Goodwin went through documents from Chicago’s Law Department and isolated incidents that alleged police misconduct or neglect. Her findings showed that 90 percent of settlements and judgments the city paid that year were police-related.

Goodwin criticized the city for not distinguishing in its data how much is spent on police-related settlements specifically. “The City of Chicago does not care [to distinguish between the settlements] because it has no meaning to them,” she said. “They don’t care.”

Goodwin added that Chicago is “consistently underfunding police settlements,” meaning the funds set aside to pay them, which results in Chicago’s tendency to rely on bonds to fund legal settlements. This affects taxpayers because the bonds must be repaid with interest, and one of the funding sources for bonds are property taxes. Over the course of these bonds’ lives, ACRE estimates that taxpayers will pay $1 billion in interest related to money borrowed in order to pay for all of Chicago’s legal settlements.

The ACRE report explains, “We call the bonds used to cover police-related settlement and judgment costs ‘police brutality bonds,’ because they quite literally allow banks and wealthy investors to profit from police violence. This is a transfer of wealth from communities—especially over-policed communities of color—to Wall Street and wealthy investors.”

In Chicago, many of the civilians affected by police misconduct live in Black and Hispanic neighborhoods. 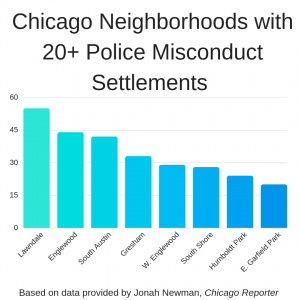 According to the Chicago Reporter’s “Settling for Misconduct” database, Chicago has settled 1,112 police misconduct cases since 2011, including cases dating back to 1981. Of the 935 cases where the neighborhood was known, or 84 percent of the total, misconduct settlements were more often in Black and Hispanic communities.

In an interview, Jonah Newman, a data reporter for the Chicago Reporter, pointed out that cases are often in Black and Hispanic neighborhoods, and that recipients of misconduct settlements are more likely to accuse officers of false arrest/reports and excessive force.

There have been several high-profile police killings in recent years that mirror these findings.

In 2012, Rekia Boyd, who was 22 at the time, was killed when she was shot in the head by an off-duty police officer. Two years later, Laquan McDonald, who was 17 at the time, died after being shot 16 times by officer Jason Van Dyke.

One of the cases ended in an acquittal while the other one ended in a historic verdict.

In October 2018, Van Dyke was convicted of second-degree murder and 16 counts of aggravated battery for the 2014 killing of McDonald. When footage was made public of Van Dyke firing 16 shots into McDonald’s body, it sparked calls for reform. The Van Dyke case is the first time in many years that a Chicago police officer has been convicted of murder.

McDonald’s family received a $5 million settlement from the city, and his uncle sat in the courtroom when the guilty verdict was read. Yet, for Boyd, the circumstances were different.

Boyd’s family received a $4.5 million settlement, but there were no charges filed against the officer who killed her. Goodwin noted that while settlements render a form of justice, they don’t necessarily address the deeper issues leading to police brutality.

While the settlement in the McDonald case was kept quiet for months, once the video of the shooting was released, citizens demanded answers. As many see it, community organizers were instrumental in bringing McDonald’s case to trial. A special prosecutor was appointed to try the case after organizers, lawyers, and community leaders filed a petition with the U.S. Justice Department arguing that it would be a conflict of interest for then-Cook County State’s Attorney Anita Alvarez to prosecute the case. The plaintiffs cited what they called her “ineffectiveness” after failing to prosecute Dante Servin, the officer who killed Boyd, according to DNAInfo.

Alvarez eventually recused herself before losing re-election to Kim Foxx, the current state’s attorney. However, the larger issue of police brutality still remains. 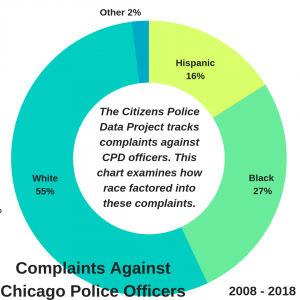 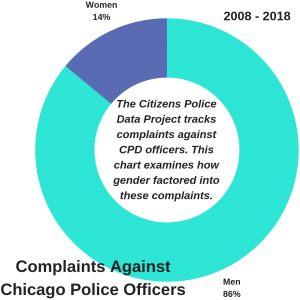 According to the data, 55% of the officers accused of misconduct were White and 86% were male. (Javanna Plummer)

Although there is no data on the Chicago Police Department website about the intersections of race and gender, statistics reported by the Invisible Institute reveal that accused officers are primarily white and primarily male. 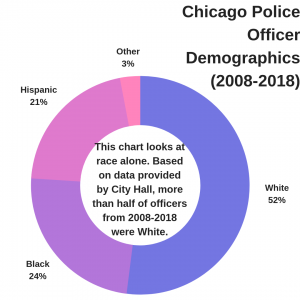 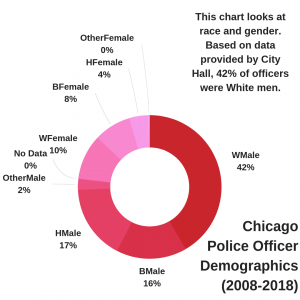 These numbers, which were provided in response to a Freedom of Information Act Request, are adapted from revised spreadsheets after errors on original spreadsheets. The City Hall FOIA officer reported that these numbers accurately reflect the police force from 2008 to 2018. (Javanna Plummer)

Meanwhile, people filing complaints alleging misconduct are primarily Black or Hispanic, according to the Invisible Institute. When studying these findings in conjunction with the findings from the Chicago Reporters, conclusions can be drawn.

From 2008 to 2018, a largely white police force racked up misconduct settlements against primarily Black and Hispanic residents, and taxpayers across the city are paying for those incidents through settlements and the issuance of bonds — bonds that benefit Wall Street companies rather than communities needing investment. These are the very same neighborhoods where police violence typically occurs, which leaves open the obvious question: is Chicago helping Wall Street “make a killing” off police brutality?