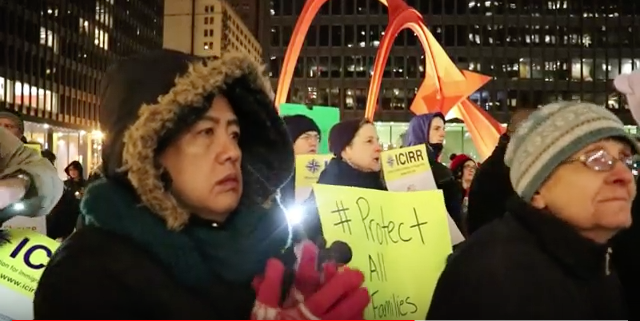 Chicago Immigration
December 12, 2018October 31, 2019 marthabayne "public charge", immigration
By Kimberly Jin
Hundreds of Chicagoans gathered in Federal Plaza on Dec. 5 to protest a new policy proposal by the Trump administration, which states immigrants who are receiving public benefits such as Medicaid and housing assistance can be denied green cards.
The proposal, “Inadmissibility on Public Charge Grounds,” was released on Sep. 22 on the website of Department of Homeland Security (DHS) and officially announced on Oct. 10 on Federal Register.
Immigrants, the proposal says, are required to prove that they “have not received, are not currently receiving, nor are likely to receive” public benefits to apply for permanent residency.
Local activists said poor immigrant families will withdraw from all public benefits if the proposal is effected, which could put their lives at risk.
The proposal was under a 60-day comment period between on Oct.10 and Dec. 10, and DHS will release a final version after taking into consideration of all public comments.