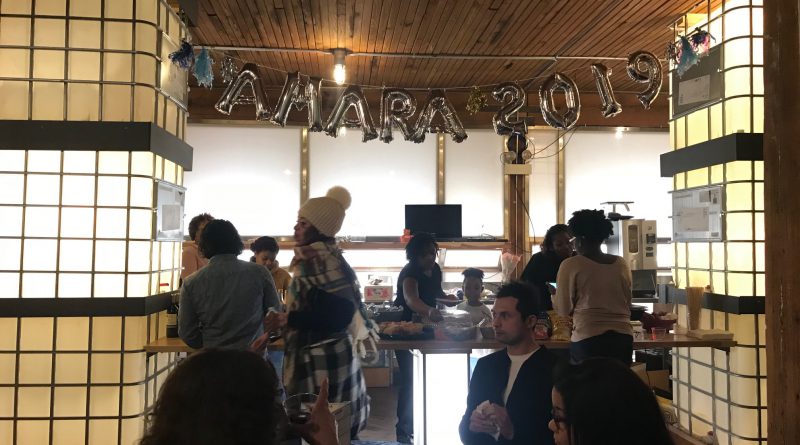 Young voters chanted “Ain’t no power, like the power of people” at Amara Enyia’s petition party at the Blue Lacuna events space on Nov. 18.

Enyia, a 35-year-old Nigerian American lawyer, is running for mayor of Chicago in a crowded field that includes some of the city’s most prominent political actors. But she and her supporters believe she can win the race based in part on the excitement she’s generated among young peope, especially in the wake of endorsements from hip-hop stars Chance the Rapper (aka Chancelor Bennett) and Kanye West.

Enyia turned in 62, 000 signatures, roughly five times as many as needed, surpassing political heavyweights like Cook County Board President Toni Preckwinkle. Enyia brings vast experience in public service to the campaign, having worked as an analyst for Mayor Richard M. Daley, and as a grassroots activist.

Younger voters, including the 300 to 500 people aged 18 to 29 who registered to volunteer for her campaign, are enamored both with her strong economic policies and drawn to her campaign after Bennett endorsed her, said Anthony Bryant, the campaign director of volunteer recruitment.


Bennett’s endorsement “was a huge news story, at the very least the campaign got name recognition,” said Elizabeth Anderson, 24. “I don’t know if it will influence my parents, but if my old white parents are hearing about Amara [via the endorsement], that’s a good sign.”

The attendees at the petition party said that the endorsements from West and Bennett have increased awareness of Enyia’s campaign, especially among young voters, but it wasn’t the only factor which was making them stick to Enyia.

“Young voters aren’t dumb. They are not voting because of Chance, they believe in her economic policies and her policies on education,” said Anderson, who works at a housing cooperative. “She has good answers for everything, that’s what young voters care about.”

Other voters said that they knew Enyia and believed in what she stood for, even before Bennett endorsed her. Campaign volunteer John Powe, 27, said Enyia’s policies are more important to him than celebrity endorsements.

“That didn’t influence me much. I am more about the substance,” he said.

In the days leading up to the Nov. 26 deadline to turn in petition signatures, Enyia campaigned at the University of Chicago and the University of Illinois at Chicago. To understand young voters’ concerns she plans to continue visiting universities, and tap into the new voter base once she is on the ballot, said Joshua Grey, her campaign manager.

“Students are for the first time seeing how they can tap into the political power they have and let their voices be heard,” Enyia said. “It’s easy for people to feel that the current political process includes them as an afterthought.”

She said she cares about the same issues that concern youth, “like student loans, affordability, job opportunities, police accountability. Young people want to feel proud about our public institutions.”

Enyia’s campaign received little media attention before Bennett’s endorsement. but Bennett’s presence at Enyia’s pull-up rallies, followed by West’s support, which has included donations totaling $200,000, have brought her onto the public radar.

Enyia acknowledged that before Bennett’s endorsement they struggled to get even one or two cameras at their rallies. Now, the campaign has “gone from local to national to international” she said.

Other attendees and volunteers at the petition party said that the celebrity endorsements “could throw people off,” as described by Amelia Mroczkowski, 22.

“I can see the skepticism of a celebrity endorsement,” she continued.

“Questions like what’s happening with the money, are there commercial interests, can pop up, but that’s not the case with her [Enyia]. Chance’s endorsement really speaks to that, if you know anything about what he has done for Chicago.”

One of Enyia’s opponents, Clerk of the Cook County Circuit Court, Dorothy Brown, who turned in roughly 25,000 signatures, said she is not relying on celebrity endorsements to gain voter support.

Johnny Fentry, 20, a videographer at Enyia’s event, said that the endorsements from music industry stars have encouraged otherwise politically agnostic young people to get more involved in politics.

“She has pretty much the entire music industry of Chicago behind her,” Fentry said. “That brings a lot of youth out to get more involved into politics, and learn about it.”

If elected as mayor, Enyia will be the first African-American female to hold that office in Chicago, and, said Grey, someone “who has been on the fifth floor of City Hall and in the streets of the community organizing.”

“It’s [our petition numbers] more like a statement thing now,” said Grey.  “Amara is here and she is not playing.”