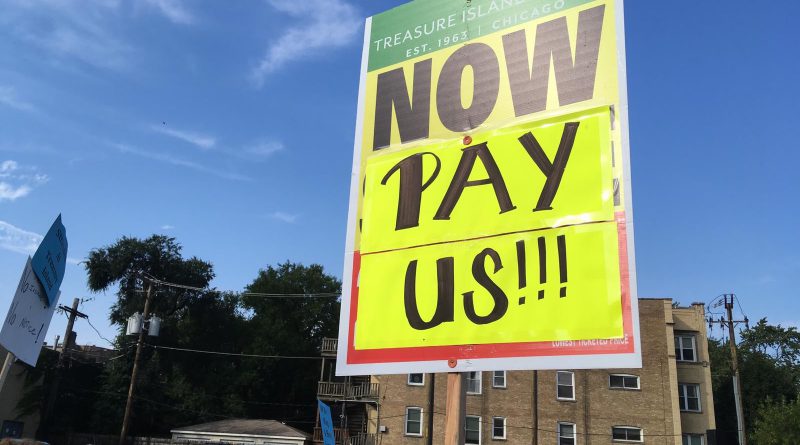 Sandra Roman, yelled these words into a megaphone as she marched across the worn asphalt parking lot of  the Treasure Island grocery store in Chicago’s Lakeview neighborhood in early October. Dozens of her former co-workers marched behind her. They worked at Treasure Island stores around the city, until the company closed abruptly in October, leaving about 700 people without a job and severance benefits.

Now Roman, 41, is a lead plaintiff in a class action lawsuit charging that the closures violate state and federal laws called the WARN Act (Worker Adjustment and Retraining Notification Act), which require that companies with over 75 full-time employees provide at least 60 days notice to workers before mass closures and layoffs. When the seven Treasure Island stores closed, workers lost their accrued paid time off and health care benefits, and never got the severance pay that the law would require.

Roman, a mother of three, was like other workers left “broken-hearted” by the layoffs, she said. But in the wake of uncertainty, she has transformed from a hardworking employee to a leader in a labor movement.

Roman worked as a scan coordinator at the grocery store chain in the Chicagoland area for over 22 years at four locations. “We were more like a family,” she said, of her co-workers. “We bonded with each other and helped each other.” Roman remembered the work environment as welcoming and warm, people who cared about their work.

But nestled alongside her paycheck on Sept. 28, she found a letter with unexpected news. “Your employment with the Company is ended today,” it said. It was signed by the CEO of Treasure Island Foods, Maria Kamberos.

Treasure Island is a family-owned company co-founded 55 years ago by Christ Kamberos, the son of Greek immigrants. After Kamberos passed away in 2009, his wife, Maria Kamberos, and son, Christ Kamberos Jr., took over the business. The son, now 29, assumed the role of vice president of development. Some employees recalled feeling disrespected by him. “He didn’t treasure his dad’s work,” Roman said.

Getting the letter “was one of the moments when you don’t even have words,” said Roman, who has brown hair with subtle crimson tips framing her round face. “You look at the papers and [ask], ‘Is it possible that this is it?’ You dedicate so much time to this company.”

Arise Chicago, an organization fighting for workers’ rights,  rallied workers to fight back against what they say were unfair labor violations. The organization also connected the workers to an attorney.

Just days after the layoffs, Roman organized dozens of her fellow workers and implored them to come out to meetings and the protest. She buckled down and created neon-colored posters for the protest that in her looping penmanship declared:  “WARN Act: 60 days pay, or 60 days notice.”

Roman first felt that her job might be in jeopardy when she received notice on Aug. 10 that the Treasure Island store where she worked on North Clybourn would close. Roman was transferred to the Hyde Park location by the company, but some of her colleagues were laid off.  She suspected the company might be in trouble, and asked management if she should look for another job. But she was told it was not necessary, she said.

Shortly after starting work at the Hyde Park location, Roman was asked to inventory every item in the store. She found this request unusual, but acquiesced. Employees also reported inconsistent inventory deliveries and shortages of certain items. Her worst fears seemed confirmed a few weeks later when she heard rumors that all the stores were closing.

Still, the letter with her paycheck making her termination final — that very day — was a shock. Under the state and federal WARN laws, the workers should have gotten 60 days notice of layoffs, or 60 days severance pay The WARN Act is meant to ensure that employees and government agencies have time to prepare for layoffs that affect not only individuals but whole communities.

As of October 31, there have been 13,777 Illinois employees affected by mass layoffs subject to the WARN Act, according to notices filed with the state as required by the law. Of the 122 WARN Act reports documenting plant closures and layoffs, over a dozen provided less than 60 days notice to workers, according to data provided by the Illinois Department of Commerce and Economic Opportunity.

Karen Englehart, the attorney representing  Treasure Island workers in the class action lawsuit, said that the legal battle ahead remains uncertain. If the courts reach a settlement in favor of the workers, Englehart will have to fight to ensure any remaining assets are shifted to the workers before paying other entities whom Treasure Island owes, like produce wholesalers. There are 10 named plaintiffs in the lawsuit, including Roman. If a settlement is reached, the court will decide which other workers qualify as part of the class. Mujica estimated up to 400 could be included.

Arthur Stamas, the attorney representing the Kamberos family, could not be reached for comment.

It will be an ongoing fight, but Roman is ready to keep leading, she said on a typical day this fall that saw her rising at 4:15 a.m. to drop her kids off at school, go on a job interview then bring her 63-year-old mother a birthday cake and flowers. When Roman was a child, her mother described her as the loudest and most daring of her children. Roman thinks those qualities are helping her to keep fighting for workers rights.