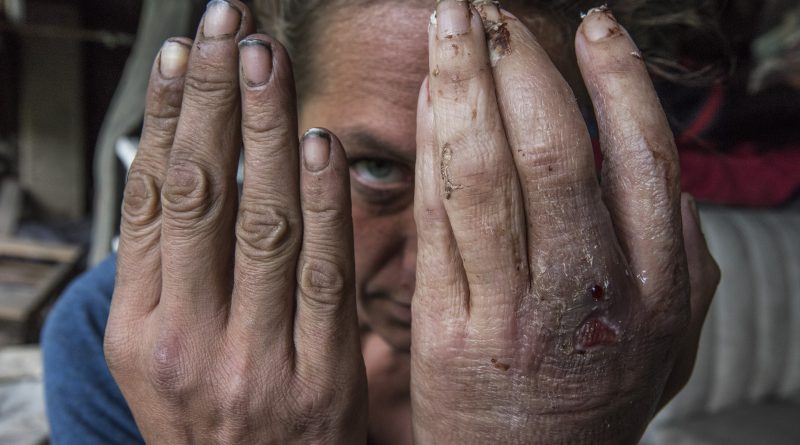 An ache came from Abana Tabb’s legs. He looked down and saw the open wound bleeding like a leaking faucet. It seemed like a full cup of blood.

Tabb’s heart cannot pump well because of congestive heart failure, but it started beating rapidly. He felt dizzy. He lay down on the street.

That was two weeks ago. Tabb, 61, was hospitalized and had four blood transfusions. He survived. But it was not his first time feeling close to death.

Two years ago, when the yellow liquid first leaking from his legs created “a big pond” around Tabb, he was too scared to scream for help.

“There was no blood,” that time, Tabb said. “But it hurt so much inside.”

Dealing with his wounded legs for over two years since then, Tabb has gone back and forth to the hospital numerous times. He is familiar with the signs of reinfection.

“Hot. Very hot. It hurts,” he said, pointing at his legs. “You can smell it. Very bad. Like rotten.”

Tabb thinks about giving up hundreds of times. The recovery process is long, hard and painful. His legs swell and hurt after he stands for a long time. But he has to. He is homeless.

Wound care can be simple: keep the wound clean and free of infection. The body can normally heal itself. But for the 5,450 people who are homeless in Chicago — as the city estimates — the healing process often takes months or even years, and the success rate is uncertain, doctors said.

People who are chronically homeless are especially at risk of wounds, often related to poor health and living on the streets. Injecting heroin, accidents and diseases like congestive heart failure can all cause or exacerbate wounds.

According to a case study published on the website Healing Hands, factors that increase homeless people’s risk of acute and chronic wounds include poor hygiene and nutrition and lack of access to health care.

Karim Khan, a doctor at University of Illinois at Chicago, has helped many homeless people with wound care. He said the biggest problem is re-infection. If people don’t see a doctor when they get small infections, the wound can develop over months into a large and chronic one that is open to the air or even goes down to the bone, Dr. Khan said.

For drug users specifically, Dr. Khan said, a condition called “skin popping” can cause a particularly high risk of infection. This refers to drug users shooting heroin into the muscle below the skin when they can’t find a vein to inject into.

“The worst chronic wounds that I’ve seen are all people that were skin popping. They didn’t get adequate treatment for older infections and continued to introduce new infections. Their bodies don’t heal well,” he said. “Bacteria enter there, reproduce and then potentially can latch onto your heart valves, can go into your lungs.”

Ryan Ali, 43, has used drugs for 24 years. He first found a swollen “bubble” on his leg five years ago, but he didn’t go to the hospital.

At first, the “bubble” was the size of a quarter, a little bit darker than the normal skin. Using a blade to lance it, Ali used to squeeze the abscess. The yellow liquid spurted out and flew in any direction.

Over the years, sores on his legs gave him fevers, he said. Both of his legs seemed like trunks – swollen and dark. He has been to the emergency room 13 times.

“The doctors couldn’t figure out a way to treat my drug problems and medical problems,” Ali said. “Heroin addiction is a disease.”

With a bone infection, tissue around the wound can deteriorate and develop into an open laceration. Two weeks ago, Ali went to the hospital but left after six days even though his wound wasn’t healed.

For serious infections, it may be necessary to administer antibiotics intravenously, often through a PICC line, a “peripherally inserted central catheter” that travels from the arm to a large vein near the heart.

However, this treatment can be risky for drug users, who may be tempted to inject heroin directly through the line. Therefore, taking antibiotics orally may be the only choice for many drug users.

Ali knows stopping heroin is the only way to really heal himself.

“If I am not doing drugs, it’s just gonna make the process quicker and easier, and make things easier on myself,” he said.

Another wound sufferer, Shea Allen, doesn’t even know the exact cause of her wound. She is addicted, but she never injected through the place where a wound developed in the middle finger of her left hand.

Sometimes Allen still feels pain and cold from the finger, though she lost that finger last month.

“She allowed it to continue the infection until the bone actually protruded from that finger,” said Tony Eovaldi, Allen’s boyfriend.

At first, she thought her finger was jammed, but days later her whole hand started to heat and swell.

Allen didn’t go to the hospital when she found the infection one month ago. “I’m afraid of being sick,” from not having access to heroin while hospitalized, Allen said.

When she finally ended up in the emergency room, her finger had to be cut off to save her hand. “Basically it just fell off,” Eovaldi said.

Now Allen is getting used to the lost finger and trying to recover normal movements of her left hand.

The process is not easy. His open wound is getting smaller, he said, but there is still a long way to go.

“It (the wound) takes life away from me,” he sobbed. “I can’t play football, I can’t have fun with my friends, I can’t play with my grandchildren.”

Nonetheless, he tries hard to keep living his life. He doesn’t want to lose his leg, a serious risk when chronic wound becomes infected.

Featured photo: Shea Allen got an infection on the middle finger of her left hand in September. Photo: Lloyd Degrane