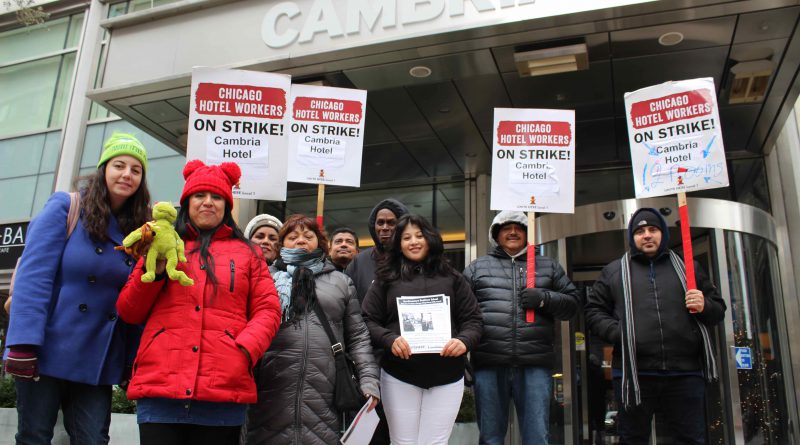 On the Tuesday before Thanksgiving, Yolanda Garduño, 49, arrived at the Cambria Hotel Chicago Magnificent Mile at 7 a.m. in a crimson coat and matching hat topped with pom-poms. She picked up a picket sign and joined a dozen of her fellow workers, marching back and forth in front of the hotel’s grand entrance.

The overcast, below-freezing morning marked the 71st day since Cambria Hotel workers joined a wave of strikes at 25 other hotels owned and managed by different companies across the Chicagoland area. But as the holidays approach, the Cambria Hotel is the only hotel still on strike. UNITE HERE Local 1, the union representing the workers, and the hotel have yet to ratify a new contract after the last one expired on Aug. 31.

The union wants the hotel to provide year-round healthcare, increased wages and healthier working conditions. But the parties have not settled on the exact conditions of the new contract. The stall in negotiations leaves workers, like Garduño, little choice but to stay on strike.

Garduño has worked at the Cambria Hotel as a housekeeper for 12 years. Each winter, she said her co-workers with less seniority temporarily lose their jobs and healthcare as business at the hotel slows. The union is demanding wintertime healthcare coverage for all workers.

The mother of three also found it challenging to keep up with the cost of raising her family on an income of less than $20 an hour as a housekeeper. “My daughter and son go to college now. I need money not only for my benefits, but to pay the college [tuition],” she said.

But the threat of an increased workload worries Garduño most. The hotel’s operator, Fillmore Hospitality, wants to increase the housekeepers’ workload to 15 rooms per day — up from 13 — in the new contract, according to Sarah Lyons, a spokesperson for the union.

The hotel underwent renovations earlier this year. In Garduño’s eyes, the changes made the rooms more difficult to clean. With additional amenities like glass tables, televisions and heavier mattresses, she struggled to finish cleaning the required 13 rooms before her eight-hour shift ended.

Fillmore Hospitality did not return requests for comment. Ohio Public Employees Retirement System (OPERS) owns the Cambria Hotel and is responsible for signing the contract. In a statement, spokesperson Michael Pramik said, “The OPERS Board of Trustees has adopted a position of neutrality regarding union activities at properties in which OPERS has an interest. We expect the parties to bargain fairly and legally, and we look forward to the resolution of their issues.”

Repeatedly lifting the heavier beds can cause Garduño’s shoulders, lower back, hands and knees to hurt, she said. “By the last day [of the week] you feel more tired, you feel pain in the body,” she said. “For us, it’s very important to not clean two more rooms.”

The current workload becomes more difficult as she ages, and increasing the room quota could have serious consequences for her health, she said. Housekeepers also reported that the pain caused by their work negatively impacted their time with their family, as they struggled to play with or lift their children, according to the survey.

Compared to all other service sector workers, hotel workers experience a 40 percent higher chance of injury, according to a 2010 report by the American Journal of Industrial Medicine. The highest rate of injury happens to housekeepers, a majority who are women of color. Between 2015 and 2016, the number of fatal injuries for leisure and hospitality workers increased by 32 percent, according to the Bureau of Labor Statistics.

Waiting for a resolution

The workers continue to show up to strike every weekday except Thanksgiving Day. But as temperatures continue to drop and the sun sets earlier each day, workers are anxious to return to their jobs and daily routine.  “When [they] sign the contract, I’m ready to go back to work,” Garduño said.

Sarah Chiappe, a hotel worker formerly on strike at the Hilton Hotel, came to the Cambria Hotel on her day off to support her fellow hotel workers on strike.

“I am very strong, because I’m not alone,” said Garduño, with Chiappe at her side. “My co-workers are staying with me and the other union workers support us.”

Garduño is not the only one eager for resolution. The new contract will cover about 60 hotel workers. Last month marked the 32nd year that Chuck Conley, 61, has worked as a houseman at Cambria Hotel. Standing bundled in his winter layers and wearing an infectious smile, Conley said he was hoping to see a pay raise come from the new contract. He wants the owners to sign a contract soon so he can take some days of vacation and rest in December.

But Conley said he will not back down and plans to continue coming out to picket at the hotel. “I’m not just fighting for my rights, but for all those other generations to come,” he said.

Featured photo: Workers strike outside of Cambria Hotel Chicago Magnificent Mile after joining a wave of strikes at 25 other hotels across the Chicagoland area eleven weeks ago. The Cambria Hotel is the only hotel still on strike. Photo: Camille Erickson.