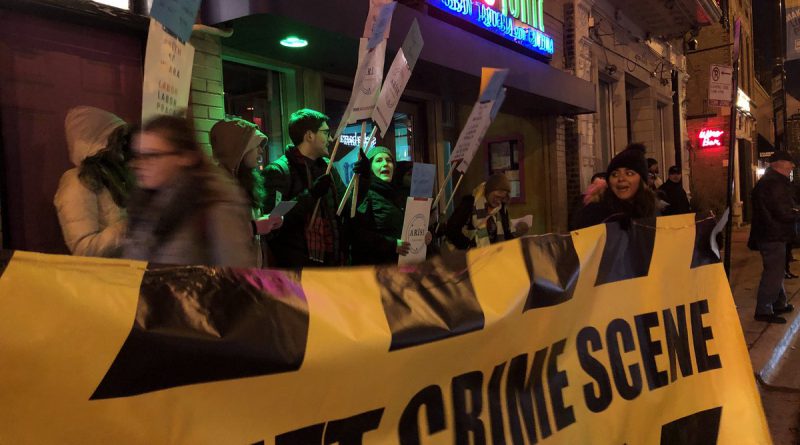 On Halloween night, Jackie Gonzalez, 25, received an unexpected text message from her co-workers. Taco Joint, a restaurant she worked at in Chicago’s River North neighborhood, was permanently closing that night. She was out of a job, the message said.

“I thought they were messing with me,” she said. But after reaching out directly to the owner Edgar Castañeda, she said he confirmed that the taqueria and cantina where Gonzalez worked for over five years as a hostess, server and manager, was closed.

With no official notice, Gonzalez and about two dozen of her co-workers were suddenly left unemployed and without their last three weeks of pay, said Arise Chicago, an organization advocating for labor rights. This week workers took action to demand compensation for their work. But what happened to Taco Joint employees is part of an all too common practice of wage theft disproportionately impacting low-wage workers of color in the city. A state bill amending the Illinois Wage Payment and Collection Act (IWPCA) was passed in 2010 to combat this discriminatory practice. It imposed stricter penalties on employers and added protections for workers. But there are cases where wage theft still goes unpunished and some workers never recoup their lost wages.

After finding out about the closure, Gonzalez said she tried to reach the owner to ask for her checks. “I haven’t heard anything and I’ve been texting him. He doesn’t respond to my messages,” she said. “That’s just unprofessional.”

Frustrated with the lack of response, on the evening of Nov. 13, Gonzalez, along with her mother, siblings and a dozen fellow workers, confronted Castañeda at the Taco Joint adorned with festive, neon lights and colorful decor in Lincoln Park during dinner time. Castañeda co-owns a chain of three Taco Joints with his cousin, Marcos Castañeda. Two Taco Joint restaurants remain open.

With the support of Jorge Mujica of Arise Chicago, workers streamed into the restaurant to demand their wages. But the the owner swiftly kicked the workers out of the restaurant, saying they had no right to protest inside.

This is not the first time an employer stole wages from Gonzalez, she said. She used to work for Castañeda at his previous restaurant, Zocalo, until it shut down in 2013.

“He didn’t pay me for a month and a half [of work], and I was working overtime because I needed the money for school,” she said.

According to Gonzalez, Castañeda told her that he needed to sell the restaurant’s furniture before he would be able to compensate her. But six months passed and there was still no check. “I got disappointed, Gonzalez said. “I mean, we earned that money, we should get paid.”

Companies who engage in illegal labor practices like wage theft often slide by with minimal penalties. A 2017 investigation by the Chicago Reporter found that only 1 in 4 Illinois workers who file wage theft claims obtained reimbursement within a year. And over 58 percent of all claims made by workers in 2014 were dismissed by the state.

If the Illinois Department of Labor pursues a claim made by a worker, it can take an average of 9 months for a settlement to be reached. The lack of effective recourse means many workers do not even try to pursue a claim, the analysis concluded.

Julian Garcia, 33, worked as a busser at Taco Joint in River North. Garcia spoke fondly of his work at Taco Joint. He dreamed of becoming a bartender at the restaurant, and felt appreciated by his managers. “I was happy working there,” he said. But when the owner informed him after his shift on Oct. 31 that the restaurant would be permanently closing, he said his hopes dissolved.

“We understand that he has some difficulties,” Garcia said referring to Castañeda. “We noticed that they were short [on] customers. But we were mad that he didn’t let us know on time.”

After the action on Wednesday night, workers said they were not backing down from the fight for their wages.

Castañeda said in a statement that he was working to resolve the issue. “I fully intend to to remedy all financial obligations to my former employees. I truly sympathize with everyone that gathered at our Lincoln Park location on Tuesday and respect their right to do so,” he said.

According to Arise Chicago, shortly after the protest, Castañeda agreed to meet at the organization’s office on Friday for negotiations.