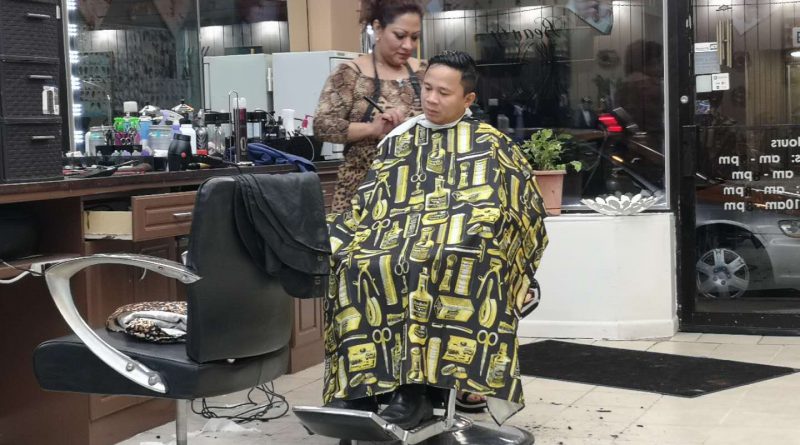 During Orlenda Caseres’ two-month journey in 1995, she crossed borders between four countries: Honduras, Guatemala, Mexico and the United States.

Caseres, 19 at that time, walked for most of the time, and sometimes swam or “traversed the desert,” as she said.

The journey involved much danger and expense, and once in the U.S. she worked for two years in an Ecuadorian restaurant to earn enough to pay her family members back for money they’d loaned, she said.

But the danger and expense were worthwhile. In her home country, like other Hondurans, she was struggling to live.

“I started working at 9 years old because my mother couldn’t make enough money,” Caseres said. “We cooked one egg and we had to eat, you know, four sisters together.”

By earning money to support one another, her family members came to Chicago one by one. Now Caseres has lived in Chicago for more than 20 years, still working hard to give her kids a better life, “A life I never had when I was young,” she said.

Similar motivations brought Lorna Sanchez to Chicago eight years ago from Honduras. Among other things, she was seeking “an easier pathway to college.” Though she was born in Honduras, she became a U.S. citizen because her mother was born and raised in the United States. But her other family members were not that “lucky,” she said.

“Two of my cousins were killed in Honduras,” Sanchez said. “Four years ago.”

Many of her family members have tried to cross the border, “common narratives with my family,” but only one made it and obtained asylum last year after a five-month journey, Sanchez said. Now he works at a restaurant and sends money back to his family in Honduras.

“You can’t live there (Honduras) anymore,” Sanchez said. “I would love to go back, but it’s full of violence and drugs.”

Honduran immigrants began arriving in Chicago in the early 20th century, according to The Encyclopedia of Chicago. As of 2016, as reported by the American Community Survey 1-Year Estimate, there were 5,524 Hondurans in Chicago. The Trump administration announced in May that they would end Temporary Protective Status for nearly 60,000 Hondurans, meaning they are required to leave the country by January 2020 unless they gain asylum or other legal residency.

Still, since last month, thousands of Honduran migrants have been reaching the U.S. border to seek asylum. Escaping from unemployment, gang violence, natural disasters, extreme inequality and corruption, they feel “safer” on the road, they have said. President Donald Trump said on Twitter last month that the U.S. would cut off foreign aid and deploy the military to stop the Honduran refugee caravan.

Experts and Honduras solidarity activists say the U.S. has a responsibility to help Hondurans since the U.S. military has long used the country as a base and because, as many see it, U.S. military aid has contributed to political violence and government repression there.

“President Trump is trying to paint the caravan as a threat to whip up fear and distract from the U.S. government’s own responsibility for the conditions that people are fleeing,” said Vicki Cervantes, U.S. coordinator of the Honduras Solidarity Network. “We are asking the United States to stop all military aid to Honduras, to stop human rights violation.”

Chicago activists gathered across from Trump Tower on Oct. 24 to support Honduran immigrants in the caravan and demand that President Donald Trump stop supporting the current Honduran president, whom many call a dictator.

Matt Ginsberg-Jaeckle, one of the organizers of the protest, said the U.S. has interfered in Honduras for years. The intervention includes support for the Honduran military’s seizure of power in 2009 and government repression, disastrous economic policies and fraudulent elections, he said.

“Chicago will stand with the caravan of Honduran refugees,” Ginsberg-Jaeckle said. “Chicago will open our home to the members of the caravan. We will continue this struggle as long as migrants and refugees are forced to flee.”

The caravan currently traveling through Mexico has grown to thousands of people. Similar caravans in the past have helped migrants from Central America find refuge in the U.S. or Mexico. Around 80 percent of the people in the caravan this year come from Honduras, according to a report from HUFFPOST.

“It’s not like this caravan is the first wave of immigrants, there have always been caravans,” Sanchez said. “But the only difference is now the caravan is getting an image that they are enemies, threats and terrorists.”

Sharon Hunter Smith, 61, the office manager and human rights coordinator for the Chicago Religious Leadership Network on Latin America, said people have the right to leave the countries where they suffer from unendurable situations. That is part of international human rights law, she said.

“We’re no longer supporting the law,” Smith said, about the U.S. “I feel that’s shameful.”

Caseres also hopes that members of the Honduran caravan can finally lead a new life in the United States.

“Government cares about money, they don’t care about people,” Caseres said. “I want them (the refugee caravan) to make it here, they should get help.”

Caseres never thinks of going back. Life in Honduras is a bad memory that she tries to forget, she said. And now she owns her own business, a beauty salon.

Featured photo: Orlenda Caseres, 43, left, started her own business, Linda’s Beauty Salon, in 2015. She is cutting hair for a customer on Nov. 1. Photo: Lu Zhao.