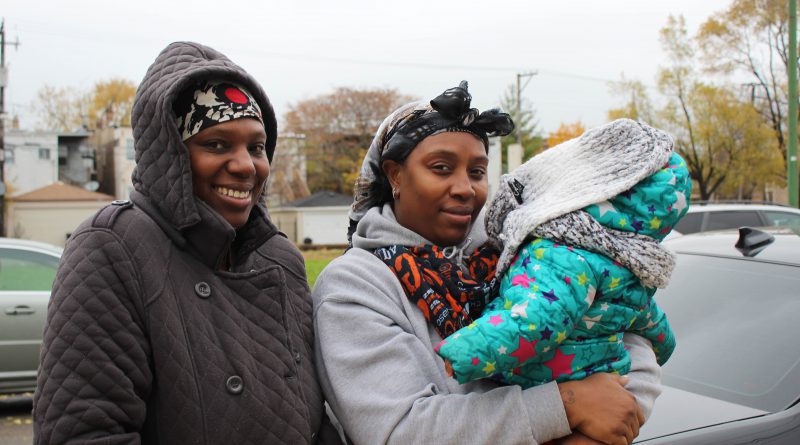 Tanya Walker, 56, registered to vote when she was 17 years old. Her first election fell on her birthday. Since then, she has tried to never miss an election. Walker lives in West Garfield Park, a predominately African-American, low-income neighborhood on Chicago’s West Side, adjacent to the neighborhood of Austin. “We’re very civic-minded in this community,” she said. “Now is not the time to be content. Because you can never be content. There is always more to reach for.”

During Tuesday’s midterm election, Walker cast her ballot at West Side Learning Center of Malcolm X College. Despite predictions that President Trump’s controversial performance would be the primary incentive driving voters to cast their ballots this midterm, residents of Austin kept it local. At polls across the neighborhood, voters cited the need for more mental health services and workers rights as their motivation to show up.

About 42 percent of registered voters living in Chicago’s 28th Ward, which includes parts of Austin and West Garfield Park, cast ballots in the 2014 midterm elections, according to the Chicago Board of Election Commission. While that’s higher than many comparable neighborhoods around the country, Walker predicted that this year’s turnout would far exceed that number. “I tried to come last night to vote, but it was too packed,” she said. “There was no more parking.”

In Walker’s eyes, the decline of mental health services in her community and across the state under Gov. Bruce Rauner’s watch was unacceptable. “What happened to all the mental health facilities?” she exclaimed. “Mental illness is a disease and it needs to be fought for just like any other disease.”

Mayor Rahm Emanuel has been primarily blamed for the closure of half the city’s mental health clinics. But budget cuts on the state level, both during and prior to Rauner’s tenure as governor, have also had a significant impact on mental health services in the city.

Chicago Department of Public Health commissioner Julie Morita recently said that the city mental health clinic closures were necessary due to a 90 percent cut in funding from the state for mental health services in Chicago. Between 2009 and 2012, the state slashed $113.7 million dedicated to mental health services from the budget, according to a report by the National Alliance on Mental Health, that estimated that 434,412 adults in Illinois live with a serious mental illness.

While those cuts took place before Rauner’s term, mental health services also suffered under Rauner because of the state’s budget impasse and cuts to social services. Rauner signed several bills to strengthen mental health resources and address the state’s rising opioid crisis in August, but to many residents these actions were not enough.

“I just wanted to get someone in [office] that I think would reinstate some of the state programs that they cut,” said Bankhead. “A lot of those people are out here on the streets, or they even end up in prison or jail, because they have mental issues.”

Denise Berry, 56, is a government auditor who lives in Austin and voted at Joyce Kilmer Elementary School. She said the decline in mental health services had taken a severe toll on her community.  But in addition to her concerns about underfunded social services, Berry said the lack of state support for workers and unions brought her out to vote.

“It’s really, really hard for people as grown adults to not able to live on their own and make ends meet,” she said. “If you have a minimum wage job and you want to be able to pay rent, water, lights, gas, plus take care of your children, it’s impossible.”

Last year, Rauner vetoed Senate Bill 81, which would have raised Illinois’ minimum wage to $15 an hour by the year 2022. The state’s minimum wage is currently $8.25 an hour. He also vetoed union-backed legislation that proposed prohibiting the passage of right-to-work laws in local governments across the state.

Oris Allen, 35, voted for Pritzker. He believes the Democrat will level the playing field for low-wage employees of Illinois and black business owners. Allen also wants to see more state support for black-owned businesses in his neighborhood.

“On the West Side of Chicago, we don’t have many,” he said. According to estimates by the U.S. Census Bureau from 2015, there are 110,115 black-owned businesses in Cook County. While Cook County leads the nation in the number of black-owned businesses, unemployment for African-American men remains high. About 47 percent of African-American men between the ages of 20 and 24 in Chicago were out of school or unemployed, according to a 2017 study by UIC’s Great Cities Institute.

Allen works for 28th Ward Alderman Jason C. Ervin and came to the poll at Symphony of Chicago West to pass out sample ballots endorsed by the alderman. He wanted to see if the much-anticipated record-breaking wave of voters would show up.  “I wanted to see how many people in the community were actually going to vote today, he said.

Image caption: Monique Bowen, 36, and Glenda Bowen, 33, are sisters who went to vote together at Helen M. Hefferan Public School in Chicago’s Austin neighborhood. Bowen covers her daughter’s face with a scarf to protect her from 20 miles per hour winds. Photo: Camille Erickson.