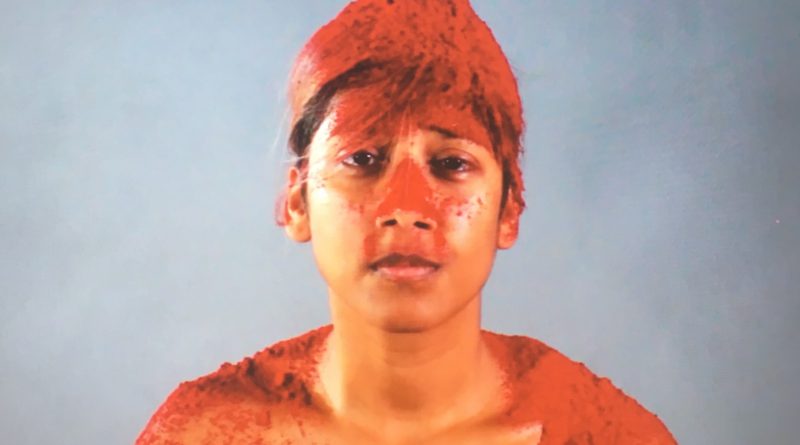 A crimson-colored powder fell from Preetika Rajgariah’s pinched fingertips and settled atop her head, transforming her hairline into a scarlet river. Gazing back at the camera with composure, the artist continued to sprinkle sindoor powder—a red spice often used in religious and cultural traditions in India—onto the top of her scalp. Rajgariah repeated this ritual until a mountain of excess powder rested atop her steady head.

In this 22-minute video titled, How about now? the artist re-appropriated sindoor powder, often used by a groom to mark the hairline of his new wife in wedding ceremonies. By taking the powder into her own hands, Rajgariah actively pushes the ritual outside conventional gender norms. She used her own body and one striking material to unpack how expectations of beauty, sexuality and culture define who she can be.

Her video is on view inside Roots & Culture, a contemporary art gallery in Chicago’s Wicker Park neighborhood, and represents just one work in the gallery’s current exhibition. Born in New Delhi, India in 1985 and raised in Houston from a young age, Rajgariah navigates complex, and at times clashing, cultures. Her installations repurpose quotidian materials laden with cultural meanings, from saris to silver punk studs, to tease apart her intersecting identities.

In her installation titled, How many ways can I tell you? the artist unraveled her mother’s old sari blouses to create new sculptural forms and claim her contested, queer identity. Riddled with frayed edges, the fabric twists, knots and droops to become entirely new, sexual objects still informed by their cultural roots, but no longer restrained.

The blouses tend to be restrictive when worn. “I wanted to push what it meant to hold a woman in so tight,” she said. “I wanted to undo [the blouse] quite literally and unravel it.” Thread by thread, Rajgariah took apart the custom-tailored, traditional blouses, dyed in colors resembling bruises and gums.

Rajgariah also assembled flashy backdrops with plastic, silver studs – accoutrements suggestive of rebellion – and mounted some of the sculptures onto their shiny surfaces. “I felt like I wanted to just celebrate women being free, owning themselves and not having to be constrained in this tight blouse,” she said. In undoing the laborious stitches that held the garments together and joining them with unconventional adornments, she created new possibilities for both preserving her cultural heritage and asserting divergent identities.

The artist created a liberated self-portrait that fell outside established expectations of womanhood. A friction emerged between who she has grown up to be and who her family wants her to be. “There’s a constant lack of understanding between me and [my family], and we seem to always be speaking different languages,” she lamented.

But the majority of Rajgariah’s work comes from nostalgic, personal experiences, including her childhood. She often draws on her upbringing and family when developing her artwork. “My parents tried to replicate [a] version of India in Houston,” she explained. They tried in earnest to recreate their “picture perfect,” former life that they left behind. But in many ways, the family’s new home in Texas ultimately looked and felt at odds with this vision, she said.

Although Rajgariah started her career as a painter, the interdisciplinary artist picked up textiles and sculpture in her practice. She periodically asks her mother for old saris and recently received a canary-yellow one, speckled with intricate flowers. Rajgariah noted that a shared passion for textiles and fabric united the women in her family.

Picking up the patterned fabric and letting its thin layers run through her hands, Rajgariah began the tedious task of disassembling it. In the work titled, Home away from home, she used a soldering iron to trace every flower, burning their edges and leaving each dangling from the sari by just a few threads. With the adapted sari stretched overhead from wall to wall of the gallery, the dissected flowers spilled forth from the fabric, leaving absences and shadows in their wake.

In Rajgariah’s eyes, the sari fails to maintain its original purpose in its torn and burned state. The hanging flowers, which drift when met with soft changes in air current, symbolize the new home her parents built and the fragile connective threads it maintained to their culture.

“There was a lot of vulnerability,” she said upon reflection after installing the exhibition. “I just had to be okay with being exposed. When your work is personal, you have to be okay with being wide open sometimes. That’s hard to do.” By dispelling cemented expectations around gender and sexuality, Rajgariah settled on finding a beauty in difference. But she has just scraped the surface.

The exhibition is on view at Roots & Culture Contemporary Art Center through November 10, 2018.

Featured photo: In this 22-minute video titled, How about now? Preetika Rajgariah re-appropriated sindoor powder, often used by a groom to mark the hairline of his new wife in wedding ceremonies. On view at Roots & Culture Gallery. Photo: Camille Erickson.