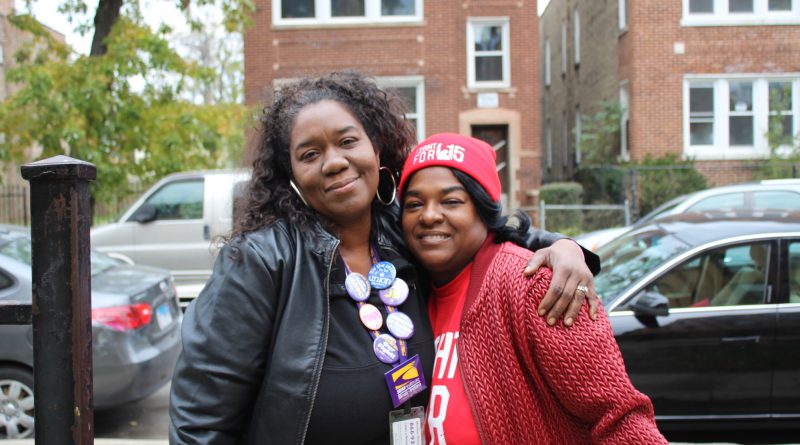 On an overcast Saturday afternoon in October, Dezirae Garcia, 19, heard a knock at the door of her apartment building. Wearing her pink hair in pigtails, she poked her head out the first-floor window to see who was there.

Outside stood Shantonia Jackson, 50, and Takesha Williams, 43, who held clipboards and asked if Garcia planned to vote in the upcoming election. Garcia admitted that she had never voted before. She simply did not know how.

Garcia lives in West Garfield Park, a predominately African-American, low-income neighborhood on Chicago’s West Side. In the lead-up to the Nov. 6 election, there was much focus on getting out the vote in such neighborhoods around the country.

In the month leading up to the election, Jackson, Williams and other members of the national grassroots movement Fight for 15 and the labor union SEIU have knocked on thousands of fellow workers’ doors in a push to convince new or reluctant voters to head to the polls.

Using labor rights as a top issue to engage voters, they hit the pavement with the goal of mobilizing more low-paid workers of color to vote in the election. They hoped increased worker participation could tip the state legislature in favor of unions and a $15-an-hour wage.

About 42 percent of registered voters living in Garcia’s ward cast ballots in the 2014 midterm elections, according to the Chicago Board of Election Commission. While that’s higher than many low-income African-American neighborhoods around the country,  organizers wanted to increase participation this year even more.

Walking down the 4100 block of West Adams Street, Williams said she felt a responsibility to canvas and vote. “You get tired of what’s going on,” she said. “But you have to have faith that the system will change. I have to use my voice.”

Williams worked full time at Dunkin’ Donuts for 13 years. But when she walked into work on Sept. 14, her general manager delivered unexpected news: she was fired.

“I was shocked,” Williams said. “I was one of their dedicated workers, and I couldn’t believe that they would do that. If I was in a union, that wouldn’t have happened.”

When Williams started working at Dunkin’ Donuts, she was paid $6.15 an hour. Just before losing her job, she made $12 an hour. Yet, even with the higher wage, her weekly income was still insufficient given the rising cost of living, she said. Her job also did not provide healthcare or paid-time off. As a mother and a grandmother, the cashier often took on double shifts or stayed overtime.

Williams is not alone in her struggle for better pay and job security. According to a 2017 Economic Policy Institute report, 2.3 million Illinois residents make less than $15 an hour. And nearly half of African-American workers in Illinois earn below that wage. Based on data compiled by National Employment Law Project, a single adult living in Chicago needs to make at least $16.31 an hour at a full-time job to afford basic household expenses in 2018.

After losing her job, Williams decided to devote more time to Fight for 15’s effort to mobilize voters across 11 states to support candidates committed to protecting unions and raising wages. In her eyes, the key to changing these conditions is to get out and vote.

“What happened at my job is the reason why we are out here,” she said.

In Illinois, organizers shared information on the gubernatorial candidates’ stances on issues like minimum wage, healthcare and unions.

The Republican incumbent, Bruce Rauner, faced Democratic candidate J.B. Pritzker — who ultimately won the election. Jackson expressed frustration at what she described as Rauner’s anti-worker track record. She planned to vote for Pritzker, attracted by the Democrat’s promised support for labor unions and a higher minimum wage.

“[Pritzker] made some promises to us,” said Jackson. “So if we support him, he’ll support us.”

Williams agreed. Last summer, Williams was rallying in Springfield when Gov. Rauner vetoed Senate Bill 81, which would have raised Illinois’ minimum wage to $15 an hour by the year 2022. The state’s minimum wage is currently $8.25 an hour.

Armed with determination and persistence, Jackson and Williams continued up West Adams Street, knocking on several apartment doors. Jackson said she confronted residents who were reluctant to vote, but she was able to sway them after sharing her own story about working low wage jobs.

Hyson Harper, 37, stood outside his house of 38 years on Adams Street as the canvassers walked by. They asked if he would vote.

“I don’t miss an election,” he answered. Looking up and down the block he added, “A community like this doesn’t get resources like the North Side.”

Harper is a community organizer working to combat violence in Chicago. Although wages in the city have increased, the cost of living keeps outpacing any gains, he said.

Along with fair working conditions and pay, he planned to support candidates who would restore or expand basic services like mental health facilities in the neighborhood. “Our voices count,” he said.