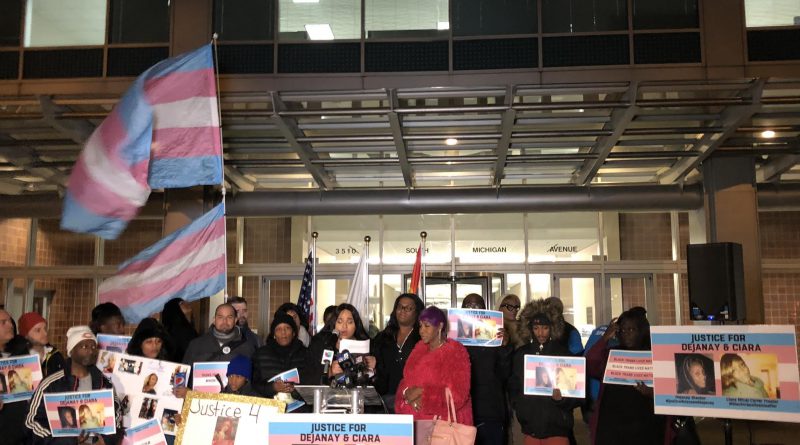 Chicago transgender activists are demanding an update from Chicago police about the murders of two black transgender women in the last two months, as recent news about a memo connected to President Donald Trump’s administration raises questions about transgender rights nationwide.

Dejanay Stanton was fatally shot on Aug. 30 and Ciara Minaj Carter Frazier was fatally stabbed on Oct. 3, the Chicago Sun-Times reported. Community activists organized a rally on Oct. 25, demanding that the city hold the perpetrators accountable for the murders.

Reyna Ortiz, board vice chair of the LGBTQ rights organization Equality Illinois, which organized the event, said transgender women decided “it’s time for us to come together and formulate power in this community.”

The rally was held less than a week after The New York Times reported on a leaked memo that showed Trump’s administration “is considering narrowly defining gender as a biological, immutable condition determined by genitalia at birth.”

People attending the rally said the memo’s content was unsurprising from the Trump administration.

“I think talking to a lot of people in the community that that’s not news,” said Carolyn Leach, a TransWorks Career Specialist at Chicago House. “For many years, people have been trying to erase trans people.”

He emphasized the importance of voting to protect transgender rights.

“We can’t sit any election out,” Cratic said. “The first thing I thought was that elections have consequences. Every vote matters and we have to be able to pay attention and hold people accountable.”

Neither the White House nor the Chicago police responded to requests for comment.

Stanton’s mother, Valerie Griffin, 51, said the rally showed her that “at least somebody cares” and “if it’s not the city or the police, it’s somebody.”

“We need to get justice for these girls,” Griffin said, “and we need to put more knowledge out about transgender women and how they’re living and the things they have to go through just to be themselves.”

Ortiz said the struggles of transgender people have helped lay the groundwork for recent gains in LGBTQ rights. Given the current context, she said, they need to keep fighting.

“Trans women have lived, survived, thrived and died fighting for the acknowledgment and equality,” Ortiz said. “We have worked tirelessly, we have sacrificed our lives; we deserve this. This is our time as a community.”