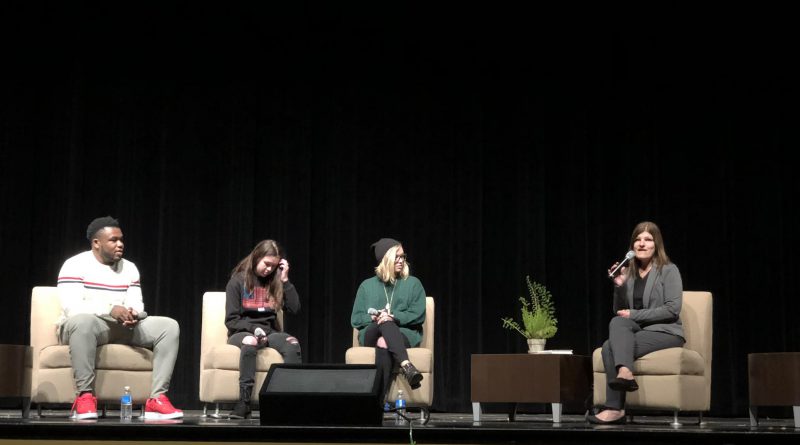 Chicago high school students Clare Gorey and Edie Browne are too young to vote in the midterm elections, but they are involved, motivated in part by the national campaign around gun violence.

On Oct. 26, they were among students hearing from March For Our Lives founders Delaney Tarr, Sarah Chadwick and Jammal Lemy, who presented the group’s book, Glimmer of Hope: How Tragedy Sparked a Movement at Nicholas Senn High School.

Tarr and Chadwick were at Marjory Stoneman Douglas High School during the deadly shooting on Feb. 14, and Lemy graduated two years earlier from the high school.

Tarr and Chadwick said they were inspired to ongoing activism by the two-day lobby trip they took with 100 students from Parkland, Florida to Tallahassee, Florida after the shooting. Tarr said she was angry by politicians who showed up late to meetings and did not answer their questions.

Chadwick agreed that “it was really difficult for us to see,” but encouraged the group to “vote them out this midterm.”

Gorey, 15, of Downers Grove, walked out of school with her classmates after the Parkand shooting. More recently, Gorey got involved in the 6th District congressional race, where Democrat Sean Casten is challenging incumbent Republican Peter Roskam.

“It’s a super close race, so I’ve been volunteering with Sean Casten’s office to try to push it over the ledge, so we can hopefully turn the House this year,” Gorey said.

Browne, 17, and a resident of New Trier Township, said she wants to spark advocacy among her peers. She said her peers are educated, but asked the March for Our Lives founders for advice on how to get them involved.

“A lot of the time when people are educated enough to know what’s going on and still not take any action, I think that’s the epitome of privilege,” Lemy said, drawing applause from the audience.

However, the founders said there are many forms of activism for young people. Lemy said it is fine to not have a voice yet.

“Just because you aren’t where you want to be in this point in time, that doesn’t mean you’ll never get there,” Lemy said.