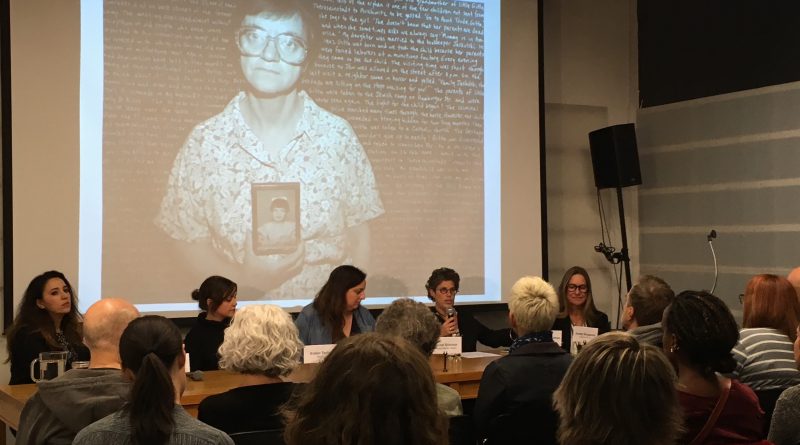 In 2016, the world was horrified by a photograph of 5-year-old Omran Daqneesh caked in dust and blood while riding in the back of an ambulance after a drone strike in Syria.

For Catherine Edelman, the emotions sparked by the photograph laid bare both the potential and shortcomings of photography and art as tools to end violence, displacement and war. Edelman is the co-founder of CASE Art Fund, an organization offering grants to photographers addressing the refugee crisis.

“For 24 hours we were outraged, and then we moved on again to the next horror,” Edelman said, during a Sept. 26 event convened by CASE Art Fund at the organization Art Works Projects in River North.

But images can play a significant role in building awareness about human rights abuses, displacement, war and the challenges faced by refugees around the world.

An estimated 68 million people worldwide have experienced forcible displacement, according to the United Nations Refugee Agency (UNHRC). As of September 2018, 6.5 million Syrians have fled their homeland due to the war, according to the the Refugees Operational Portal.

Yet, according to data from the U.S. Bureau of Population, Refugees, and Migration Office of Admissions, only 29 Syrians have been able to resettle in the U.S. this year.

The relative reluctance of the international community to extend humanitarian aid and push back against the violence led Edelman to question the effectiveness of the very medium she has dedicated her life to as a gallerist and curator.

“I have struggled with the fact that we know photography can affect change,” Edelman said. “Yet, there is a huge deluge of images on a constant basis that no one is paying attention to.”

In her eyes, although photographs of the Syrian crisis raised public consciousness, they categorically failed to interrupt the cycles of violence.

For example, Attar said each time a certain city is under siege, images and hashtags proliferate, sympathy mounts and prayers are offered—but nothing actually changes.

“People want to help refugees, but people didn’t want to think about why are people becoming refugees,” said Attar. “That’s the real tragedy of this crisis.”

Given the rush of daily responsibilities and news consumption, panelists wondered if most people can continue to care about an issue beyond the moment the news or image is right in front of them.

“If you’re skimming the news and you see just the headline with the image, sometimes it’s so heartbreaking that [you] shut down,” said Kristen Taylor, curator at the Museum of Contemporary Photography in Chicago.

She said such encounters can result in a disconnect, or an “othering,” that allows viewers to put a distance between themselves and refugees. To her, a successful image, or an image with impact, can build a bridge between the crisis and the viewer by sparking empathy and further action.

“Art as a witness is helpful,” said Rachel Schrock of Human Rights Watch. “It’s a way that we can connect with our humanity … art is at the core of the best things of who we are.”

Schrock said when Human Rights Watch releases 150-page reports on the refugee crisis, the images often draw readers in initially or encourage them to read more.

Annaliese Flynn-Taylor, curator of Art Works Project, said that while images may not make a lasting change or play a considerable role in halting tragedies, images act as “our eyes on atrocity.”

“Where is the world? Where is America? Where is Obama?”

When Attar traveled to Syria between 2011 and 2014 at the beginning of the civil war, these questions were, as she described it, constant.

The Syrian civil war officially began in 2011 as infighting increased between four major factions, including the existing regime ruled by Bashar al-Assad.

“The Syrian revolution, even before the humanitarian crisis and refugee crisis itself, and the war, has been very visual and vivid, and also very immediate,” explained Attar.

The majority of images and videos have been captured by civilians and activists on the ground and later broadcast on major news outlets. Social media increased the immediacy of these images and supplied undeniable evidence of the atrocities.

According to Attar, many Syrian civilians involved in the revolution against Assad’s regime relied on the immediate dissemination of media to tell the world what was happening.

And civilians watching their country descend into violence expected the world to respond.

“It’s like everyone was waiting and thinking it just hasn’t gotten bad enough for people to do something,” she said.

University of Illinois at Chicago student Jude Wafai, 24, spent the past three years living in Lebanon and tries to stay tuned in to human rights issues around the world. She sees images as an important medium to keep her informed.

She cited a quote attributed to photographer and Syrian refugee Omar Imam suggesting that refugees are over-photographed, yet under-seen.

“I thought what was really emblematic of how the last eight years [in Syria] have gone,” she said. “When you hear the words ‘social justice’ I think you think social activity. Art spurs these same feeling and emotions.”

Attar is working to shift resources to individuals most directly impacted by displacement. At Karam Foundation, she hands cameras directly to Syrian youth living in Istanbul to tell their own stories. But to her, it will take more than any one image.

“We felt like [Syrian refugee youth] lost a lot of their power when it was their images only taken by journalists,” said Attar. “We wanted to create photography workshops for the kids to actually learn how to take their own pictures, and tell their own stories.”