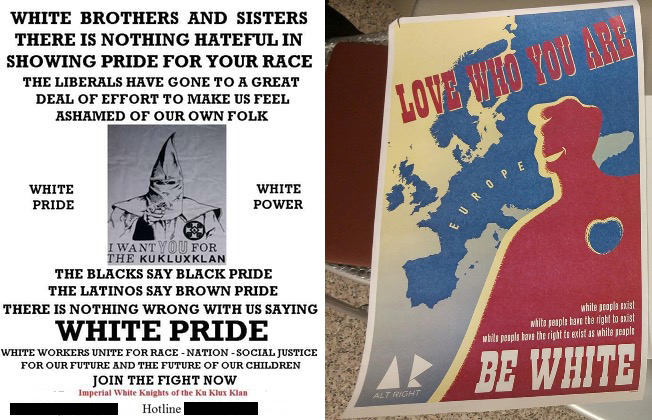 On July 22, residents of Tinley Park, a suburb south of Chicago, found racist flyers in their yards with a headline that read, “White pride doesn’t mean hate,” according to the Chicago Tribune.

In Chicago and nationally, white nationalist groups have become more prominent and more emboldened since President Trump’s rise. As they’ve garnered more attention, some have also tried to distance themselves from hate and violence.

“What we are dealing with is a social dynamite,” Ted Pearson said. Pearson, a representative for the Chicago Alliance Against Racist and Political Repression, credits the recent rise of white nationalist propaganda to “forces emboldened by powerful backers and a ready base” among people who feel disaffected by society.

Since 2016, white nationalist groups, most notably the KKK, Vanguard America and Identity Europa have increasingly spread propaganda across the Midwest, said Jessica Gall, regional director for the Midwest Anti-Defamation League, a national organization that fights hate and extremism

In order for hateful rhetoric to reach the level it has, “it needs the right incubator,” said Gall, who sees the lead up to and election of President Trump as creating “the right platform” for this type of rhetoric to be heard more often.

Identity Europa is a white nationalist group that was founded in 2016 and made up primarily of white men in their mid-twenties. The group believes in a movement to “restore and defend white European identity in America,” according to group spokesman Sam Harrington. The group’s “focus on both political and social networking,” Harrington said, has helped Identity Europa establish a presence in most major cities, helping them collect more funds and make connections with elected officials.

Categorized as a hate group by the Southern Poverty Law Center and Anti-Defamation League, Identity Europa has focused its propaganda efforts on college campuses.

A report by the Anti-Defamation League found that college campuses nationwide have seen a 77 percent increase of white supremacist propaganda, including racist, anti-Semitic and Islamophobic fliers, stickers, banners and posters, during the 2017-18 academic year. Identity Europa was responsible for almost half of those.

Weeks after Trump’s election in November of 2016, two women from the Crestwood suburb of Chicago reported finding racist fliers supporting white supremacist organizations on car windshields in the neighborhood. According to an article by NBC Chicago, one of the women interviewed found fliers distributed by the Racial Nationalist Party of America that declared “history is on our side.”

In March of 2017, 21-year-old Matthew Urbanik was caught by University of Chicago Police after hanging racist and homophobic posters on academic buildings around campus. The Chicago Maroon, the university’s independent student newspaper, reported Urbanik’s flyers were posted on behalf of a neo-Nazi group called, Atomwaffen Division. The group also claimed responsibility for other incidents of flyering on the university’s campus.

Additionally, this past July the Beverly Review reported on a similar incident taking place in Mt. Greenwood. According to the article, a local resident contacted the Chicago Police Department after finding close to a dozen fliers proclaiming, “White Lives Matter” and including a list of white supremacist websites.

While incidents of hate have increased recently, Pearson argues the rise of white nationalism is part of an American culture “ingrained with racism and white supremacy.”

In Chicago, Pearson says this culture finds “expression in the police department,” where, as he sees it, targeted violence and hostility against African Americans is often protected by law.

While there have long been complaints of deep-seated racism by Chicago police, the rise of right-wing activity since President Trump’s election has also sparked increasing attention to racism more generally in Chicago and nationally.

“People see the problem much more clearly today than they did before,” Pearson said, and even though things are getting worse, the “response among the people is getting better.”