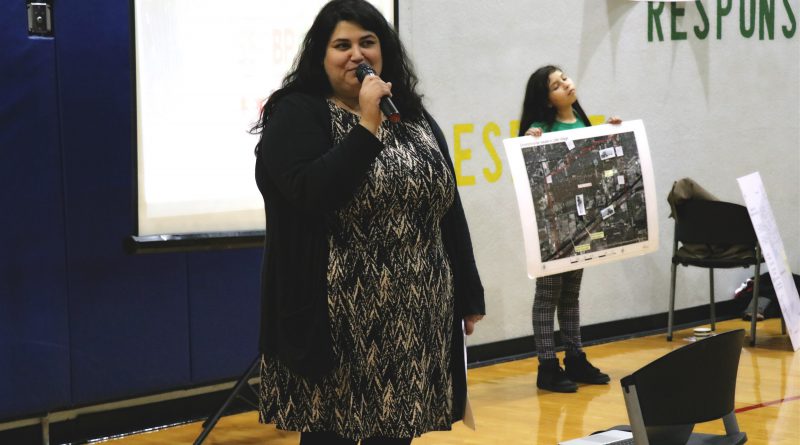 “This is one Chicago,” said Gina Ramirez at an Oct. 11 meeting of residents from Little Village, McKinley Park, Pilsen and Hegewisch at a YMCA in Little Village.

Ramirez is co-chair of the Southeast Side Coalition to Ban Petcoke, which fought for years to stop the storage of the toxic material in their neighborhood.

Now, Ramirez is helping to bring together people from different neighborhoods.

Facing similar environmental challenges caused by industrial companies and tired of bearing pollution for so many years, community leaders have decided it’s time to join forces and share resources to raise public awareness.

“The Southeast Side has been used as a dumping ground for many years,” Ramirez said,  citing the danger of long-term exposure to toxic chemicals for people in Southeast Chicago, where the KCBX terminals company stores petroleum coke, a byproduct of oil refining.

Meanwhile, Pilsen Alliance, an environmental justice group also on the Near Southwest Side, has been working closely with the Little Village Environmental Justice Organization (LVEJO) to oppose the company Hilco’s plan to demolish a former power plant and build the largest warehouse in the city.

The plan, according to Jose Requena, a community organizer of Pilsen Alliance, doesn’t necessarily create jobs for local residents as Hilco claims while it could prevent other companies such as food manufacturers from moving in.

Requena said that since the city government is planning for regional development across industrial corridors, residents should also work together to look at the area as a whole.

“We only expected like 30 people. This is our first time together and we want to see whether people are interested. Apparently, they are,” said Kimberly Wasserman,  executive director of LVEJO, adding that “we want more collaboration. We want to do more actions together.”

Janet Lopez, a sculpture and fabric major at The School of Art Institute of Chicago and a Little Village native, said that “growing up in a community with lots of factories, I used to think it’s normal” to live with toxic pollution.  “But it’s not normal.”

“It’s really sad to know other communities are suffering the same problem. But it’s just nice to know that people care.” Lopez said.

Featured photo: Gina Ramirez, co-chair of the Southeast Side Coalition to Ban Petcoke, discusses the harm of exposure to petroleum coke, a byproduct of the oil refining process. Photo: Kimberly Jin.