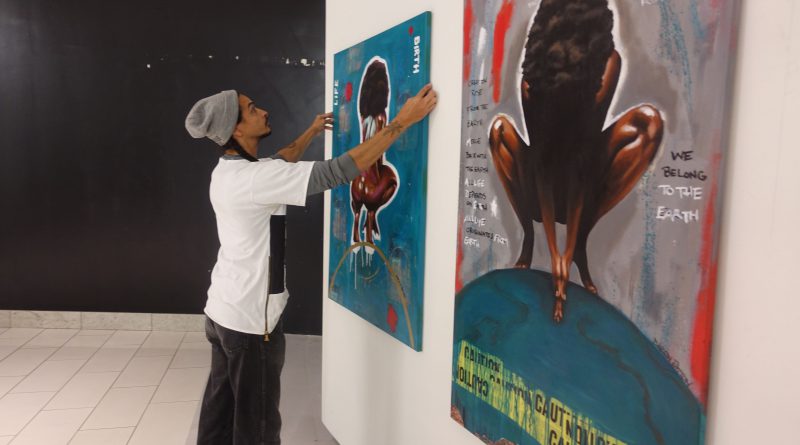 Hanging in a prominent place in a downtown pop-up gallery, the painting “Guardian” depicted a black man handcuffed by the Stars and Stripes.

“On either side of this man stand two figures, male and female,” said Gerald Griffin, creator of the painting and a well-known artist in Chicago. “They have eyes closed, mouth covered and their fingers in ears. They are not interested in his struggles.”

Griffin was among the 25 African-American artists featured in the special exhibition “The Art of Blackness,” which was launched Oct. 12 in Block 37, 108 N. State St. 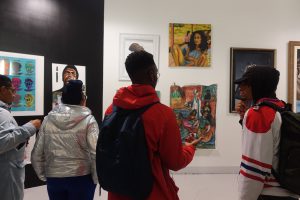 “I got it and I liked it,” said Tiffany Baggett, an administrative officer from Hyde Park, after taking a careful look at the painting. “Being an African-American, right now I am hurt and frustrated. This painting displays my feelings very well. It definitely draws out emotion.”

Paintings, sculptures and photographs on the theme of “our stories, our voices” were displayed in the 1,000-square-foot showroom, attracting hundreds of visitors. People hugged, chatted and enjoyed the arts.

“This show is a great opportunity to invite the community in and embrace one another. I am from the South Side of Chicago, but I consider the rest of the world as my extended family,” said Marcus Alleyne, a 41-year-old Chicago-based artist.

Griffin said it’s important to create public galleries that give exposure to African American artists who may not have had the chance before to display their work in such a visible gallery.

Fantasia Graham, a Fine Arts student who graduated from Bradley University in 2017 and a novice artist, was excited to be part of the show.

“I was really excited when I first saw my name in the lineup,.” Graham said. “I was just so blown away by the other artists I would be sharing a wall with.”

Featured photo: Marcus Alleyne, one of the 25 African American artists on show, set up the exhibition before it was opened to the public. Photo: Kimberly Jin.