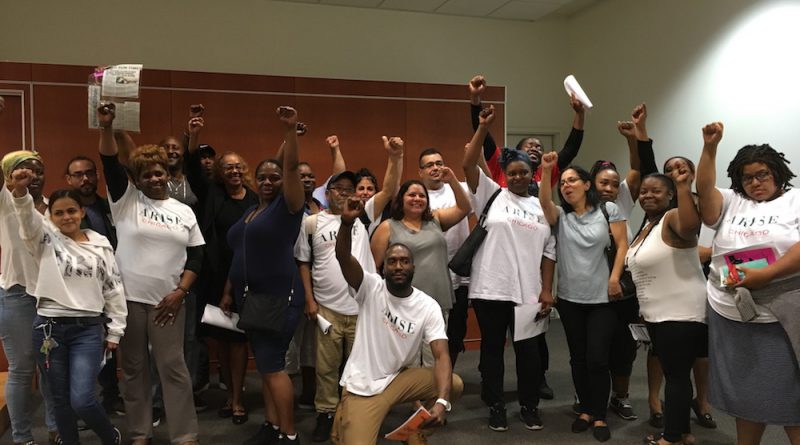 Ariel Williams was known among her co-workers as the employee with the biggest smile at Hyde Park’s Treasure Island. In addition to taking pride in her work in the grocery store bakery, the new mother juggled the demands of raising two children under 3 years old.

Now Williams is among the 700 Treasure Island employees in Chicago suddenly without a job after mass layoffs.

On Sept. 29, Williams was at home in Hyde Park on her day off when rumors of the store’s closing reached her. She went to the store seeking additional information. But instead of reassurance, she got a letter signed by Maria Kamberos, CEO of Treasure Island Foods, Inc., notifying her that the store would be closing.

“Your employment with the Company is ended today,” said the letter, dated Sept. 26 and obtained by Arise Chicago, a labor rights organization.

“I was shocked. I was disgusted,” said Williams. Now she does not know how she will afford rent, food and the $300 bill for her son’s daycare this month as she looks for new work.

Like Williams, the 700 or so workers who were laid off received no advance notice that their employment would be terminated. They also lost their health insurance and paid vacation time they had not taken, according to Karen I. Engelhardt, an attorney representing the workers. With the support of Arise Chicago, they are demanding compensation equal to 60 days of work and extended healthcare.

The Illinois Worker Adjustment and Retraining Notification Act (WARN) requires that companies with over 75 full-time employees provide at least 60 days notice to workers before closure and layoffs.

“The WARN Act gives employees, unfortunately only 60 days, but at least 60 days, to know that their jobs will be terminated,” explained Engelhardt, “but if you don’t get that notice … it’s a violation of state law.”

On Thursday, Oct. 11, Engelhardt filed a class-action lawsuit on behalf of non-unionized workers against the company for violation of the WARN Act, citing the lack of sufficient notice and the withheld compensation for accrued vacation time.

In response to the closure, Ald. Leslie Hairston (5th) called a community meeting on Oct. 9 of workers, residents and organizers at Chicago Theological Union in Hyde Park, the neighborhood where the company’s flagship store was located. Hairston also announced a job fair at Shoreland Apartments (5454 S. Shore Drive) on Oct. 13 from 10 a.m. until noon, specifically for Treasure Island workers.

“The way in which the employees were told, the lack of notice with which they were told, was unacceptable,” said Hairston. “They owe people. They have a responsibility and we are going to see to it that they live up to it.”

“You have the skills [in] customer service and the acumen that these employers are looking for,” she told the workers.

Lamar Hendrix-Glass, a deli clerk at Treasure Island in Hyde Park,  joined Arise Chicago to lead a group of fellow workers. “I am one of hundreds of workers that is left stranded by Treasure Island,” he told the about 100 people at the community meeting.

Hendrix-Glass is a father of an 8-year-old daughter and 10-year-old son. “It’s actually impacted my family this past week drastically, because I’m looking [ahead] to paying bills this month without a wonder of how I’m going to do that.”

Featured photo: Treasure Island workers and organizers from Arise Chicago gathered on Oct. 9 at the Chicago Theological Union in Hyde Park for a community meeting to demand healthcare and compensation after massive layoffs at seven grocery stores across Chicago. Photo: Camille Erickson