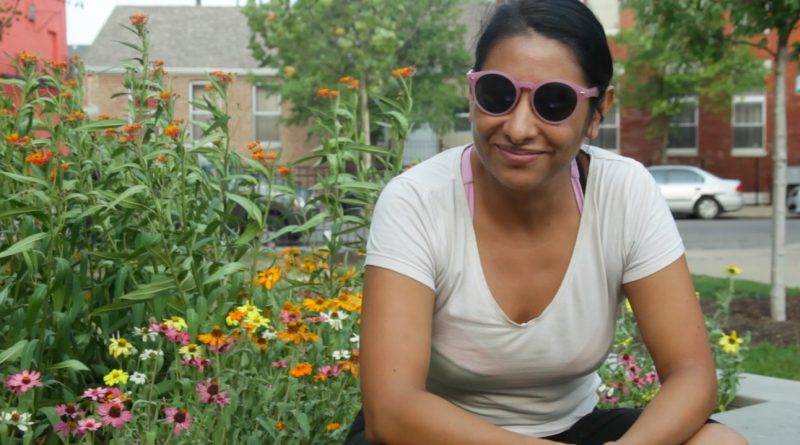 The screech of a train, the ring of paleta-cart bells and the chatter of children—these sounds define Pilsen in the summer.

And artist Amanda Gutiérrez is listening to every sound the neighborhood has to offer. She has called Pilsen, a neighborhood on the Southwest Side of Chicago, home for over 15 years. “I feel very emotionally and historically attached to this neighborhood,” she said.

Born in Mexico City in 1978, Gutiérrez is a multidisciplinary artist, who is fascinated by sound and performance art. She immigrated to the U.S. in 2002 to attend the School of the Art Institute of Chicago.

A lineage of women defined her upbringing and set her ambitions. Her mother, a community organizer, and her aunt, a painter, each helped shape her vision to become an artist.

Leaving her family was not easy for the emerging artist. “The switch was very brutal,” she said.

Upon her arrival in Chicago, Gutiérrez moved to Wicker Park on the city’s North Side. Although she joined a community of artists, she struggled to find inclusion in the group; many of the members were white.

“They didn’t know what to do with me,” she recalled. Compounded by the struggle of navigating two languages, Gutiérrez described the transition to the U.S. as a “very hard culture clash.”

It was not until she moved to Pilsen that she began to really find herself at home. When Gutiérrez first arrived in the neighborhood, hearing her native language and ranchera music as she took walks helped her “connect to the space.”

“I feel some kind of kinship with the immigrant community that lives in Pilsen,” she said.

To this day, her public art practice uses sound to investigate urban and natural places, and the people who inhabit them.

“Sound conveys a lot of information,” she said. “Sound tells us how we interact with space.”

While Gutiérrez has performed and exhibited her artwork internationally, she likes to keep her practice close to home. On a Sunday evening in early August, a dozen residents gathered in Harrison Park in Pilsen for one of Gutiérrez’s regular “soundwalks,” or listening tours, of the neighborhood.

Cupping her hand behind her ear and closing her eyes, Gutiérrez asked participants to “detect a sound of nature, something that is not made by humans or machines.”

As they walked through Pilsen, participants listened to the industrial noises permeating the neighborhood: trains, helicopters and construction cranes.

Gutiérrez led the group to the Vertiport Chicago, a commercial helicopter facility at the intersection of Wood Street and 15th Street, just north of the border of Pilsen. The airfield was built in 2015 on a vacant 10-acre plot of land owned by the Illinois Medical District Commission. It is used for emergency medical lifts, but also private helicopter tours of the city and chartered flights.

Many nearby residents have found that the noise pollution stemming from the low-flying helicopters negatively impacts their quality of life. In Gutiérrez’s mind, these “invasive sounds” shift the ecosystem of the neighborhood.

A 2017 study by researchers at the University of California found that noise pollution disproportionately impacts people of color and low-income residents, and can lead to adverse health conditions. Residents living in racially segregated cities, including Chicago, also experience more noise overall, according to the study.

In addition to drawing awareness to sonic shifts in Pilsen, Gutiérrez is attuned to the sounds resulting from increased development. She is concerned that the rapid development of restaurants or bars and increased cost of living in Pilsen, a historically Latino immigrant neighborhood, are expediting gentrification.

“Many of the families who live in this neighborhood fought for decades to have many services,” she said. “All of these services were not just given, they fought for them. And now they have to move away again further west or south.”

According to a 2016 report by the University of Illinois at Chicago, over 10,000 Latino residents moved out of Pilsen between 2000 and 2013. In this same period, the neighborhood experienced a 22 percent increase in white residents.

Along her walks, Gutiérrez provides vignettes of the neighborhood’s history, often focusing on the impacts of gentrification. Understanding gentrification is not easy and requires an acknowledgement of the layers of history and stories pulsing through a space, says Gutiérrez.

To Eric Leonardson, founder and co-chair of the Midwest Society for Acoustic Ecology, Gutiérrez provides an entry point for participants to consider the ways they are implicated in gentrification.

“From the standpoint of race, class and gender, [Gutiérrez] is addressing how human relationships in urban sectors are really interconnected; how sound plays a role in creating identity; and how we might understand others … through listening,” said Leonardson.

Gutiérrez hopes that an expanded sensory awareness of the neighborhood will feed a greater respect towards the landscape and its people.

Norman Long, 44, a Chicago-based artist and friend of Gutiérrez, finds her soundwalks powerful.

“Amanda takes us through the space, through this whole community,” he said. “It’s a way for me as a person of color to have ownership and presence in a space where my presence may be contested.”

This summer, the artist uprooted herself from her home in Pilsen and moved to New York City to expand the reach of her artistic practice and teach.

“It has been the most difficult decision in my life,” she said. “It was even more difficult for me leaving Pilsen than leaving Mexico City,” she said.

In a recent multidisciplinary installation titled, “Walking in Lightness,” the artist applied her soundwalk practice by launching a comparative project in her new neighborhood, Sunset Park in Brooklyn, also a neighborhood home to many Latino immigrants. Armed with her 35mm camera, she captured photographs and conducted soundwalks in the bustling neighborhood and later processing her findings in the gallery space.

In the resulting exhibition, she portrayed this artistic process for viewers through photographs and an accompanying 13-minute video, chronicling the development of gelatin silver prints in the sepia-toned atmosphere of a darkroom.

Layered with the ephemeral background sounds of bells and the winding gears of a clock, in the video she shares her experience as an immigrant in the video. She wrestles with the overarching question, “Why did I come here?”

She plans to continue creating artwork and teaching in her neighborhood long term. “As a researcher and as an ethnographer, I don’t want to just arrive to a place to acquire something and leave and write about it,” she said.

Jenn Grossman is a New York-based artist who collaborates with Gutiérrez. As she sees it, Gutiérrez is skilled at heightening participants’ perception to, and role in, the changes happening around them.

“I really like how she pulled sound practice out of the art space and into the public space,” Grossman said.

For now, Gutiérrez is determined to maintain strong ties to Pilsen, and remains committed to amplifying the work of Pilsen artists of color.

Featured photo: Amanda Gutiérrez sitting in Harrison Park in Pilsen where she has lived for 15 years. Photo: Ankur Singh