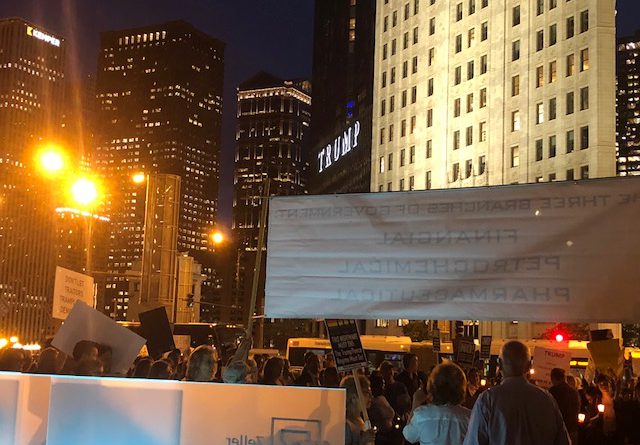 On October 20, 2014, 17-year-old Laquan McDonald was fatally shot 16 times by Chicago police officer Jason Van Dyke while walking down the 4100 block of South Pulaski Road in the Archer Heights neighborhood.

Graphic footage of the incident from police dashboard cameras, released over a year after the shooting, shows McDonald in the middle of Pulaski Road at approximately 10 p.m., first trailed and then confronted by police officers, including Van Dyke, as he tried to walk away.

The unjustified brutality of the incident and the following cover-up by police and city officials sparked civil rights protests throughout Chicago, demanding police reform and justice for McDonald and others killed by the police, most of whom have been African American men.

Far from where McDonald lived, the place he was killed was largely vacant and nondescript. According to the Chicago Tribune, it is unclear why he ended up on Pulaski Road the night he died.

To the left of McDonald, the police footage shows an illuminated Dunkin Donuts sign along the deserted service road. Behind this, there is a landscape of industrial lots and train tracks.

To the right of 41st Street and Pulaski Road, is a block of high fences, surrounding an unfinished construction site. A large development sign for a shopping center is visible behind McDonald in the video.

A year after McDonald was shot, Pulaski Promenade celebrated the grand opening of its shopping center, according to a Metro Commercial Real Estate article. The once industrial space now attracts swarms of people from surrounding areas to shop at popular retail stores.

One of these shoppers was Johnathan Washington. Washington, who lives nearby, has not been following the McDonald case closely. However, he acknowledged the effect he believes the shooting had on the city, calling it a “lose lose situation” for the police, for taxpayers and for McDonald’s family because “injustice costs more money.” Washington thinks Van Dyke should have his day in court “based on facts, not the political climate of the time.”

Four years after the shooting on Pulaski Road, many shoppers, like Margie Ramotowski, do not recognize the name Laquan McDonald. If they did know about the case, most were unaware that it happened on the same block they were standing.

Ramotowski had recently moved to the Archer Heights neighborhood after finishing college in Chicago. Though she thinks police shootings “are not handled right” and they hurt the community, she also believes the community can “get better” after incidents that incite police action.

A faded orange sticker inscribed with “16 shots,” in reference to the number of times McDonald was shot by Van Dyke, is still visible from the street on a large sign advertising the different stores at the shopping center.

As the trial of officer Van Dyke begins in September, the location serves as a reminder of what happened to Laquan McDonald and the impact it has had on the city.