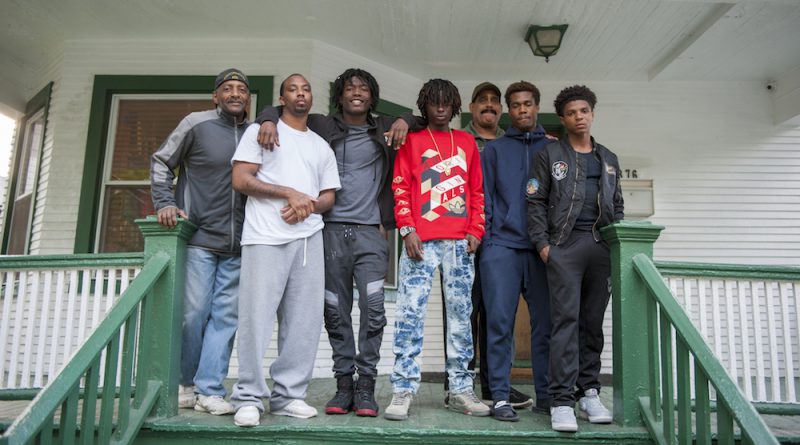 Gerald Hamilton was sitting at the head of a long table at L&G Restaurant on the corner of 75th and Exchange, flanked by a large group of teenage boys. He eats there often and his picture is up on the wall.

A Father’s Day story on WBEZ Chicago public radio mentioned he came to the restaurant often with his kids. While he was eating that day, a man came up to him to shake his hand. He had seen Hamilton coming to L&G for years with different groups of young men and before hearing this story had “always thought you were the biggest gang leader over here,” Hamilton recounted, laughing as he remembered the conversation.

Hamilton is a 63-year-old African American man with a thick mustache, athletic build, and preference for sleeveless shirts.

Since the mid-1970s, Hamilton, a retired homicide detective, has been a foster parent for over 100 kids and teenagers of different ethnicities and backgrounds, most of them young men. Some people assume that foster parents are in it for the money or don’t know how to deal with the often troubling behavior of the children they take in. Hamilton challenges these misconceptions by intentionally seeking out kids who need more support and treating them no differently than his biological children.

Gerald Hamilton Jr., one of Hamilton’s five biological children, said that growing up he “looked at it like he had a large family.” He recognized the difference between his biological and foster siblings but also learned to appreciate that this difference only came down to the neighborhoods they grew up in and the parents they had.

Despite their difficult situations, Gerald Jr. says that his father pushes his foster kids to be successful and “shows them a lot about human nature” through his compassion.

One of the young men that Hamilton reached over the years was Johnathan Andras. Andras grew up in foster care and moved into Hamilton House when he was 14 years old. Andras, who is of Puerto Rican and Irish descent, said his time growing up in “an all black environment” at Hamilton House was full of “self-exploration.” As a biracial kid, Andras said he never encountered issues of peer pressure or bullying because everyone knew “not to mess with Hamilton’s kids.” Andras explained that this stable environment gave him the “safety and security to grow into the person” he wanted to be.

Andras lived at Hamilton House until he was 19 years old. He and the other boys there at the time had their own room and looked out for each other. “For all intents and purposes, they were my brothers,” Andras said.

Now 29 years old, Andras is the CEO of a small business and in school for engineering. He still refers to Hamilton as “Pops” and stops by the house occasionally for visits. “We’re talking about a stellar human here,” Andras said of Hamilton.

Hamilton grew up in Detroit with his parents and four siblings hearing the mantra, “to [whom] much is given, much is expected.” He took this sentiment to heart.

He moved to Chicago to go to college on a basketball scholarship in the 1970s. A few years later, he bought his South Shore home and invited his grandmother to move in. Soon, he and his grandmother began taking in foster children. The surrounding neighborhood fondly dubbed the place ‘Hamilton House.’

Though Hamilton had a long career as a homicide detective patrolling some of Chicago’s most crime-ridden neighborhoods, he was a parent first. “As much as I love law enforcement, reaching out to these little guys and girls over the years has been more of a passion,” he said.

Hamilton said we need to reframe how we see foster kids so we can learn how to best support all children whose parents are unwilling or unable to do so. Many of the foster children who Hamilton has helped raise have come from the criminal justice system, an association that leads to  negative misconceptions about the child.

Hamilton urges people to remember that they are just “kids,” who grew up in a bad situation with no guidance and that they need the “same love and structure as everyone else in order to thrive.”

Hamilton’s successful parenting style doesn’t involve waving a magic wand or gathering kids around the table to impart wisdom, but instead, “they learn from example” to make positive changes, he says.

Hamilton has noticed this specifically with the young men and women he has recently employed in his moving business. He helps connect young people, including many former foster children, to real estate companies, who pay them to clear out and move furniture from homes or live in vacant units to protect the building until the next tenants move in.

When a young person sees that others trust them to do such jobs, “you start to see a difference,” Hamilton says, adding he has “seen them become empowered and then [that] bleeds into other things in their life.”

Hamilton says technology has allowed him to better stay connected with all of his kids, many now grown, and for them to connect with each other. This connectivity is a “beautiful thing,” Hamilton says. “I mean Father’s Day is crazy off the chain,” as Hamilton House fills up with “alumni” coming back to look at their old rooms and celebrate their “pops.”

“We can all benefit from some guidance,” Hamilton says, emphasizing the importance of helping his children learn how to navigate the hurdles in life. “You don’t let people determine what’s going to dictate your successes, that’s pretty much up to you.”

Featured photo: On the front steps of Hamilton House, L to R : handyman Craig Scott; Chris Jones, a foster child who lived with Hamilton for 2-3 years and comes back to visit often; Raymond Price and Emmanuel Nwagwu, both foster children who have lived with Hamilton since 2015; Gerald Hamilton; Michael Bluitt, a friend of Emmanuel’s. Photo: Bill Healy