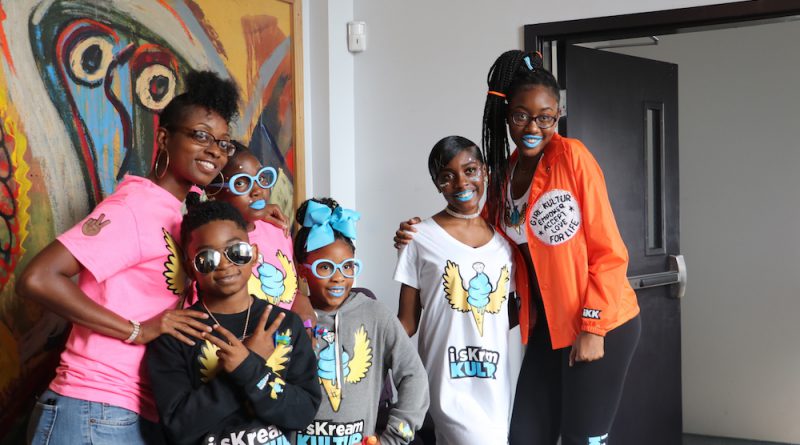 “I’m a game changer just by me being,” declared Crystal Watts, CEO of i sKream Kultur (iKK), which she said is a “mobile custom-fashion boutique.”

Watts recently partnered with The Beautiful Seed Foundation for Young Women of Color (BSF) to host a fashion show during their G.L.A.M. Day (GLAM) event. GLAM was held July 21 inside Church on the Block on Chicago’s West Side.

GLAM was “an event to let people know who we are and what we do,” said Jessica Jones, BSF finance and marketing director. BSF is a Chicago-based non-profit organization designed to “help young women of color between the ages of 12 to 23 recognize their greatness, utilize their gifts and impact the world,” according to their website.

BSF, which founder Kenya Joyce Hatch says is relatively young, was incorporated last January. However, Joyce Hatch said she had been working on this vision since 2005, when she oversaw 40 girls aged 10-13 in a six-week mentorship program where she worked with a local church to host community service projects.

Joyce Hatch has a strong connection to the church. Her father was a pastor, so Joyce Hatch grew up in New Mount Pilgrim Church on Chicago’s West Side. Through this church, Joyce Hatch had her first global experience in Zimbabwe.

“It sparked kind of a fire for global change,” she said.

However, this was not the only time Joyce Hatch took a missionary trip. In fact. her missionary work led to the inception of BSF. On a trip to Singapore, Joyce Hatch said she discovered the album Beautiful Seed by Singaporean singer Corrinne May, and it inspired the organization.

Still, while BSF is a byproduct of Joyce Hatch’s personal and professional experiences, she emphasized that BSF does not push religion. Instead, she said, BSF is “faith based;” its mission is to empower girls through five program components.

When introducing GLAM, Zulmarie Bosques, BSF study seed director, said BSF uses a metaphor that symbolizes how the group aims to nurture young women’s potential: it is like watering a seed. BSF defines leaders through five tenets: a “faith seed” for good character, a “wellness seed” for mental health awareness, a “study seed” for studiousness, a “global seed” for global awareness, and a “leadership seed.”

Joyce Hatch noted that these seed components are the core of BSF because “there are certain components that lead to a successful life for a young woman of color.” These seeds, Joyce Hatch said, “work together to lead to that success.”

Four of these seeds were represented at GLAM. The event began with a prayer, highlighting the faith seed. The wellness seed was highlighted through opening videos about positive self-images for girls and women of color.

Finally, the study and leadership seeds were demonstrated through an icebreaker that was meant to get women thinking about entrepreneurship. During this game, women in the audience were given note cards to make mock business cards. Then, they had five minutes to promote their business.

GLAM had several real-life entrepreneurs present, including Crystal Watts. While other entrepreneurs sat on a panel, Watts served as a vendor. In an interview with Medill News Services, Watts said that she started iKK in 2016 to “force my environment to accept who I am through my self-expression and fashion.”

The business’s name is an affirmation, said Watts, noting that “i sKream Kultur” means “I scream culture,” but it is stylized because Watts wants to “create a different type of culture.”

This echoes BSF’s message, which is to reach young women of color. Watts said that Joyce Hatch reached out to Watts because Joyce Hatch was familiar with Watts’ business and wanted it included in GLAM.

“Let’s collaborate,” Watts said, referring to a conversation between her and Hatch .

Watts revealed that she was once homeless, but eventually overcame this hurdle and went on to open her business. Joyce Hatch liked Watts’ story of perseverance, so Joyce Hatch invited Watts to GLAM.

This collaboration was the iKK fashion show, which featured young men and women donning iKK’s colorful clothing; the young women also donned colorful makeup. However, Watts was not the only local philanthropist who stuck out to Joyce Hatch.

Joyce Hatch thought WNBA player Linnae Harper also served as an ideal role model, so she selected Harper as an event honoree. Harper, who prepares to enter her sophomore season with the Chicago Sky, is from Chicago’s South Side.

“You were created perfectly because you were created period,” noted Harper on a pre-recorded video. She was speaking about wisdom that she told herself in developing a positive self-image and offered this advice to young girls having trouble with their own self-images.

Harper could not be present for the event, so Harper’s mother accepted the award on Harper’s behalf.  In an interview, Harper called her mother a role model.

“She was always there for me,” Harper said.

To Harper, this is what many youths in Chicago are missing – a positive role model. Therefore, Harper wants to use her platform as a WNBA player to help Chicago’s youth, which is why she recently hosted a back to school giveaway on Sept. 4th and 5th.

“I feel like at least if they have access to everything that they need to excel in the classroom, I think it will make it better,” said Harper, speaking on her event.

For future G.L.A.M. Days, BSF intends to foster more partnerships, Joyce Hatch said. She intends to collaborate with national organizations like Girls, Inc. and the Boys and Girls Clubs of America.

As BSF grows, Jones reportedly wants people to “realize that there’s a need in our community [the Black community] for some type of social involvement with young women.”

Javanna Plummer is a student reporter for Medill News Service and a Contributing Writer for Caged Bird Magazine. For comments or concerns, please email: javannaplummer2019@u.northwestern.edu.