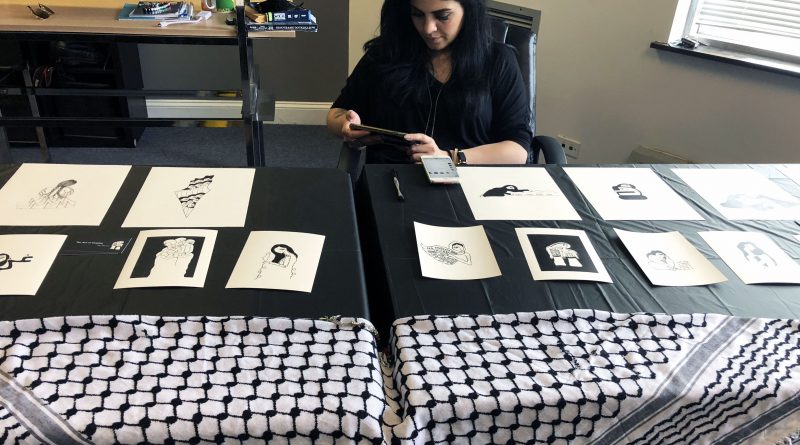 Nights of shelling characterized much of the Second Intifada – a period of intensified Israeli-Palestinian violence in the early 2000s. About 5,000 Palestinians were killed over the course of the uprising, and more than 10,000 children were wounded. For Mary Hazboun, a 34-year-old Palestinian artist and folk singer from Bethlehem, the violence she witnessed during the uprising continues to haunt her.

Hazboun said that she suffers from post-traumatic stress disorder, and that her close encounter with death during the Second Intifada was just one of the images that she has tried to “block from memory for sanity purposes.”

Palestinians were forced to obey strict curfews imposed on them by the Israeli forces. During one of the imposed curfews, Hazboun’s decision to step outside of her family home felt like it was almost a fatal one.

“One day, I almost got shot because I went outside of my house to the garden after curfew, and the next thing I knew, I was staring at a tank pointed at me,” she said. “I still remember that moment very clearly, but I try to block it out.”

Hazboun moved to the United States with her family in 2005, after the Second Intifada. More than a decade later, she is still struggling to cope with the multiple traumas she experienced in Bethlehem – from living under the military occupation to her forced migration and displacement.

But Hazboun managed to find some solace through art – including a project called the Art of Weeping, which was exhibited at the Palestine in America office in Chicago on Aug 4. Palestine in America is a non-profit organization that aims to bring awareness to Palestinian-American issues through journalistic content in its annual magazine and cultural events. The exhibit also featured work by Abdallah Al Jamal, a Palestinian refugee and photojournalist based in Gaza.

“The Art of Weeping” is “a collection about recovering from war trauma and sharing hope,” Hazboun said. She started doodling in her sketchbook as a coping mechanism when she was completing her Masters in Women and Gender Studies at DePaul University in Chicago. Much of the class discourse was on gender and war violence, which brought back memories Hazboun had “managed to suppress for years.”

“Often, I would leave class and go to the toilet to throw up or to have panic attacks…I knew my body was reacting physically to the content I was seeing, so I literally started doodling in class to ease my panic attacks,” she said. “Drawing was a way for me to sit with my pain and mourn.”

Hazboun only went public with her art in April 2018 as she found it difficult to bring her “very intimate pieces” into the public light. “Even thinking about them now makes me want to tear up. But I knew that going public was an important decision,” she said.

“Art is a crucial form of resistance to highlight the multiple and intersecting traumas of Palestinians under occupation and in the diaspora. It is about allowing ourselves to fully feel the pain of loss in order to heal, reclaim our struggle and work towards a transformative social change,” Hazboun said in a statement.

Al Jamal shared similar sentiments, and speaking through a translator over a Skype call during the event, he added: “Photographs and art are a means of conveying our (Palestinians’) voices and narrative to the international community.”

Hazboun hopes that the Art of Weeping will help to create a safe space for Palestinians in Chicago to discuss issues like mental illness and trauma, which are often considered taboo in the Palestinian community. Illinois is home to more than 250,000 Arab Americans, including many Palestinians.

“The Art of Weeping” is comprised of black and white drawings of Hazboun’s interpretations of the injustices faced by many living in the West Bank, like the erection of the Israeli West Bank Wall, which many Palestinians call the “apartheid wall.” Other drawings include her interpretation of the Palestinian resistance to Israeli oppression, and the trauma faced by a mother and child due to witnessing violence.

Sonia Hassan, a human rights activist from Egypt, said she loved how Hazboun focused on Palestinian women and children in her collection, as their role is “just as important as the men” who are fighting for Palestine.

“Her (Hazboun’s) work is so simple but so deep at the same time. It really speaks to me,” she said. “It’s beautiful.”

Nader Ihmoud, the founder of Palestine in America, said after giving up his career as a journalist in mainstream media outlets to focus more on Palestinian-American issues, cultural events like the art exhibition enabled him to think more about what his community is going through.

“Looking at these art pieces makes me reflect on what my community is going through and fighting for,” he said.  “It is an important form of resistance and helps our voices be heard.”

Featured photo: Mary Hazboun with her collection, “The Art of Weeping,” at the Palestine in America office in Chicago on August 4, 2018. Photo: Aqilah Allaudeen