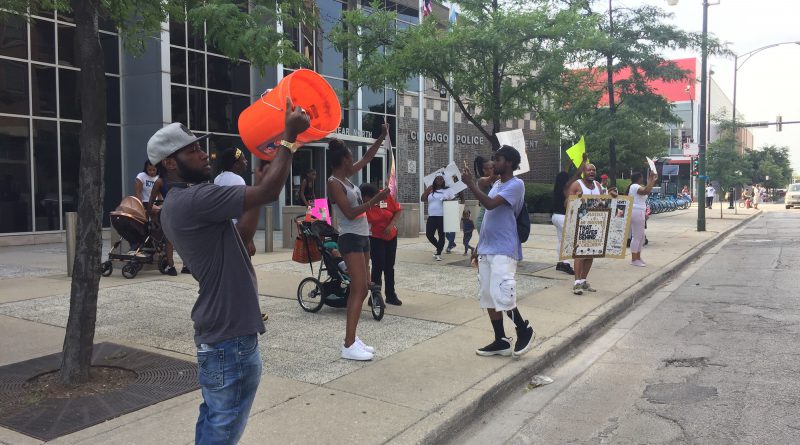 Terrell Eason was not supposed to die so young. He was 33 years old, a father of two boys and two girls, ranging in age from one year to 11 years old.

But on July 3 on Chicago’s West Side, Eason died after being shot by Chicago police.

His family members say he was shot in the back five times in an alley near the intersection of North Cicero Avenue and West Fulton Street, as he was running away from officers. The Chicago Tribune cited police statements that Eason had a gun and there was a confrontation. His family has yet to see body camera footage of the shooting.

“My nephew was working for the Salvation Army for four and a half years,” said his uncle, Bernard Eason, 57. “He wasn’t a threat to police.”

On August 3, for the fourth time in a month, Eason’s family and friends gathered on a sidewalk to grieve for him in a very public way. This time, they were in the Old Town neighborhood on the North Side where Terrell and his only brother, Terrance, grew up.

“If he ran, he was no longer a threat,” Terrance said. “What’s the purpose of shooting him five times in the back?”

Holding signs saying “Justice for Terrell,” about two dozen people chanted: “Five shots in the back. How you justify that?”

Many drivers honked as they passed the protesters who included Eason’s 91-year-old stepfather, Tom Moore, in a wheelchair. Tammy Haymer brought her two-year-old daughter, Alonny, to all four protests. The mother of Eason’s youngest child is a friend of Haymer’s.

“His girlfriend will never be okay,” she said, “to know you are not going to raise your child with its father.”

The protesters marched a half-mile to the Near North Side police station accompanied by two Chicago police vehicles that stopped traffic at intersections.

Tina B., 33, who led the chants, said she preferred not to give her last name. She said Eason introduced her to her child’s father 10 years ago. “This really hits home. That’s why everybody is out here,” she said.

Ellis Miller, 30, grew up with Eason and went to the same school. He drummed loudly on an orange Home Depot bucket with a broken flashlight as the mourners walked. “This is my first friend who was murdered by Chicago Police,” he said. “His mother, that’s my family, too.”

Eason’s mother, Alice, 54, and his aunt Debra, 55, said the family had hired attorney Gregory Kulis to represent them. Kulis has scheduled a press conference for Tuesday, August 7 at 11 a.m. at 1365 N. Hudson St.

Featured photo: On August 3, family and friends of Terrell Eason protest his shooting by Chicago police outside the Near North Side police station. Photo: Kietryn Zychal