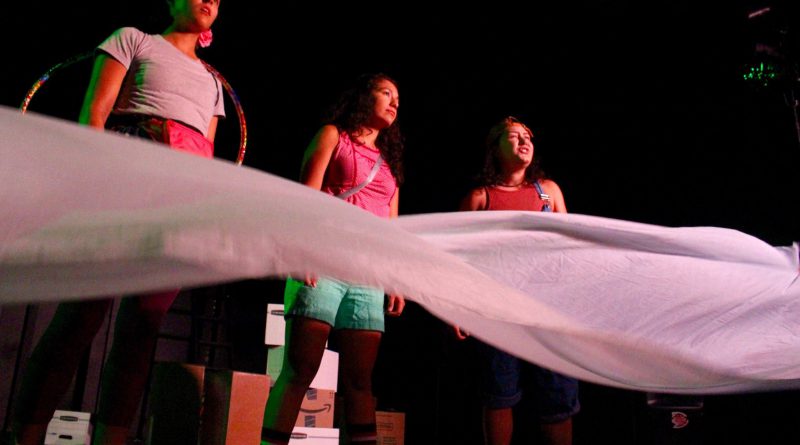 For a few weeks in May, a magical, fictional world hid on the fourth floor of the Pulaski Park Field House.

This mysterious place is the Land of Melanin, a universe where three young warrior-explorers get lost in the play “Epic Tales From the Land of Melanin.” The show, created and performed by members of the Chicago-based artist collective FEMelanin, took over Chicago’s Free Street Theater stage in the field house, inviting young audiences to join the adventure — if at least for an hour.

In the play, the three protagonists — Anacaona, Carmen and Ha’Ani — are young girls traveling through mysterious islands in pursuit of ways to change the world — while battling an unseen group of “Takers” who are meddling with their lives. During the trip, the heroes, armed with a map, battle monsters and escape a deep fog and explore their identities with the help of an audience that constantly reminds them that they are “strong, wise and unstoppable.” They do all this while at the same time exploring their different identities as women of color. 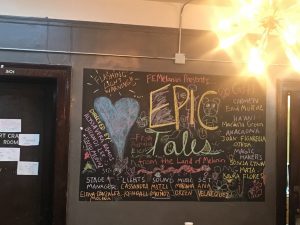 With this show, FEMelanin co-founders Enid Muñoz and Mariana Green said they hope children can enjoy non-Eurocentric narratives and see themselves represented on stage. FEMelanin, which has existed for around three years and is described online as a “collective of multidisciplinary, self-identified femme artists of color,” is dedicated to putting up shows that creatively depict real-life tales of people of color and of marginalized identities.

“We came together over all of us feeling a need for a space where we can use our own voices and tell our own stories without having false representation in it and also a place where we can practice things like consent and like holistic ways of healing,” Muñoz said.

Women of color, Green said, aren’t given enough platforms to tell their intersectional stories, which is why they came together to put more of these experiences on stage. “Epic Tales” is one of these plays in which different stories and perspectives by and of women of color in their group get a chance in the spotlight.

The three characters in the show all have storylines based on the real experiences of either the actors’ relatives or historical figures. Green said her character, Ha’Ani, is based on characters from Chamorro Folktales, stories traditionally told in Guam, where Green’s mother’s family is from.

In the show, Ha’Ani pilots a boat and bears a bow and arrow (in the form of a creatively used hoolahoop), and stumbles upon Anacaona and Carmen as they explore one of the islands in the magical Land of Melanin.

Muñoz’s character, Carmen, is based on her grandmother and family in Mexico. In the show, Carmen helps guide her friends with help from her ancestors, who she speaks to throughout the story.

Meanwhile, Anacaona (portrayed that day by Joan Figarella Ojeda) is based on the historic Taino cacica of the Caribbean who was imprisoned and executed by Spanish conquerors after resisting occupation and refusing to serve as a concubine to the colonizing Spaniards.

Throughout the show, Anacaona — who also steps in as the group’s leader — rejects any shortening of her name and corrects anyone who dares call her anything but her name. Some young children of color, Green said, get their name mispronounced or shortened all the time, and that is one of the ways they might feel oppressed in their daily lives. Muñoz said FEMelanin didn’t want to “dumb down” or simplify the topics for children, so they focused more on what oppression feels like for them.

Though the show is tailored to kids, the message of the story is for young and old alike. As the girl-heroes battle all adversities thrown at them by the “Takers” — which in this story represent colonizers and oppressors of people of color — the play is full of jokes and references for both kids and parents.

“Kids and young people are aware of this stuff,” Muñoz said. “We knew that they would understand and we knew that we would be able to have a full conversation without having to be like ‘That’s not polite, that’s not safe.’ No, it’s real, and they’ll understand and they get it.”

Both co-founders of FEMelanin said they hope to continue working in this show and consider rotating the stories of the three main characters for other narratives based on the lives and backgrounds of other performers of color. One day, Muñoz hopes they’ll be able to tour the show across the nation, but for now they’re starting in their own home town. They hope to stage the show in Chicago Public Schools and other locations around Chicago.