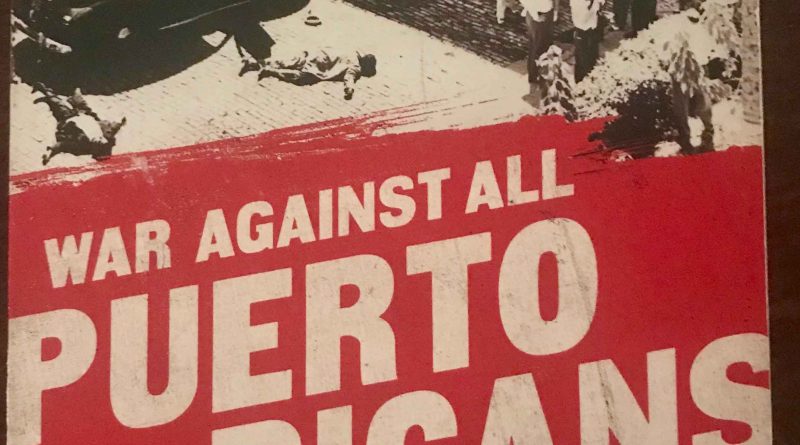 Authored by high-profile former New York State Representative Nelson A. Denis, War Against All Puerto Ricans: Revolution and Terror in America’s Colony is one of the most well-known books about Puerto Rico’s colonial status. And ever since Hurricane Maria tore through Puerto Rico—leaving thousands of people without basic necessities like electricity and water—the book has only become more popular.

Katy O’Donnell, an editor at Nation Books, which published War Against All Puerto Ricans, says they have “seen a 54 percent growth in sales over the same period last year, so there has been a bump post-Maria.”

The increase in book sales seems to demonstrate that people are taking a genuine interest in the U.S. territory—and its relationship to the mainland—as it grapples with the aftermath of the most destructive Caribbean storm in the past 60 years. But like the island, the book has a deep-rooted and tumultuous political past.

This list of “lies” is broad in scope. Ferrao finds fault with everything from Denis’ assertion that the Puerto Rican flag was illegal on the island from 1948 until 1957 to his interpretation of the sterilization of women under Puerto Rican Legislature Law 136 to the very title of the book—which Denis claims he derived from a quote by Elisha F. Riggs, Puerto Rico’s chief of police from 1934-1936. According to Ferrao, Denis has wholly misrepresented Rigg’s words to add to the sensationalism of the book.

Ferrao concludes that War Against All Puerto Ricans is historically inaccurate and compares the book with James Frey’s A Million Little Pieces, a best-selling memoir released in 2003 that was later found to be largely fraudulent.

Ferrao didn’t get the last word, however. Naturally, Denis disagreed with this interpretation of his work, so he published a rebuttal entitled, “The Many Lies of Luis Ferrao” on his own website. In this post, Denis not only supplied counterarguments addressing each of Ferraro’s 29 accusations, but categorized Ferrao as a “mercenary academic” and his criticisms as an attempt at a “mid-career boost.”

Despite the public nature of Denis’ and Ferrao’s contentious back-and-forth and the fact that it occurred less than three years ago, it is likely that many new readers of War Against All Puerto Ricans have never heard of the controversy. Ferrao’s essays—along with essays on the topic by other prominent historians such as Héctor Melendez and Pedro Aponte Vázquez—were published in Spanish. Even with the help of online translators, they aren’t accessible for many Americans.

In addition, most people on the mainland were not particularly attuned to or interested in occurances on the island before Hurricane Maria, though Puerto Rico’s financial problems and political status were of no small magnitude. According to a poll conducted by Morning Consult in September, only 54 percent of Americans know that people born in Puerto Rico are U.S. citizens. While that percentage may have since increased given the amount of people who googled some variation of the question “Are Puerto Ricans U.S. citizens?” after the storm, it nonetheless highlights the mainland population’s confusion, misunderstanding and ignorance about the island.

In an attempt to better understand Puerto Rico’s historical context, people are turning to resources—War Against All Puerto Ricans being among the primary ones.

When asked to look retroactively at the book in the aftermath of Maria and with the understanding War Against All Puerto Ricans might be some people’s first exposure to any kind of Puerto Rican history, some scholars agreed with Ferrao’s interpretation of the book as one with dubious veracity. Maria Acosta Cruz, a literature professor at Clark University in Worcester, Massachusetts, brands the book as “pulp fiction” and decries the non-fiction, historical labels booksellers give it.

“The book’s fictional heightening of history is laid bare when it recounts the anecdote of a nationalist that was fed his own son, a gruesome legend that has been used from Herodotus in ancient times to contemporary Game of Thrones,” she said.

Laird Bergad, a history professor at the City of New York (CUNY) Graduate Center, expressed more caustic criticisms. He accuses Denis of being a “nutcase who knows nothing about Puerto Rican history and is just spouting nonsensical myths motivated by political ideology as opposed to historical facts. It’s not worth the paper it’s printed on. Real garbage.”

But there are other professors who not only consider War Against All Puerto Ricans to be mandatory reading for their students, but who endorse the accuracy of the book. 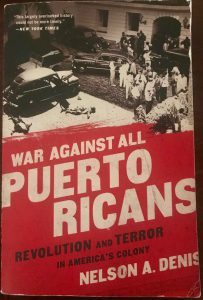 An associate professor of Spanish and linguistics at California State University—San Marcos, Michelle Ramos Pellicia believes that the book gives a voice to the oppressed by narrating the stories of those suffering the consequences of colonialism and imperialism. As she sees it, the historical details recounted are only shocking because they are not discussed more often. In her opinion, it is even more necessary for people to read War Against All Puerto Ricans these days given the federal government’s lackluster response to Hurricane Maria.

“The storm has highlighted the historically toxic and paternalistic relationship between the United States and Puerto Rico,” she said. “The federal government’s lack of rapid response pales in comparison to their response to the hurricane aftermaths of Harvey in Texas and Irma in Florida. FEMA is still criticized for its slowness and for denying aid to a number of people whose homes have been damaged. Reading ‘War Against All Puerto Ricans’ puts the current history in perspective. It is not a coincidence…Many are still without water and power. Many have died, and the government has denied their deaths. Many local businesses are unable to function again. Many U.S. mainland corporations are profiting off this aftermath, yet many Puerto Ricans have lost their relatives, friends, homes, jobs, everything.”

If War Against All Puerto Ricans intends to educate readers about Puerto Rican history, but Puerto Rican academics themselves differ so widely in their opinions of it, what place does the book have in Puerto Rican literature and public scholarship?

Maritza Stanchich, a literature professor at the University of Puerto Rico, offers a possible reconciliation: Understanding the book as a metaphor for the Puerto Rican-mainland relationship. She views the book as an allegory that epitomizes the strong emotions surrounding Puerto Rico’s little-known and controversial treatment by the U.S.  and notes that War Against All Puerto Ricans was not published by an academic press but by Nation Books, which bills itself as an independent public affairs publisher.

“I hope future editions are corrected, as parts of the book … merit broader discussion,” she said. “Denis’ book will no doubt continue to engender spirited debate, as it well should.”