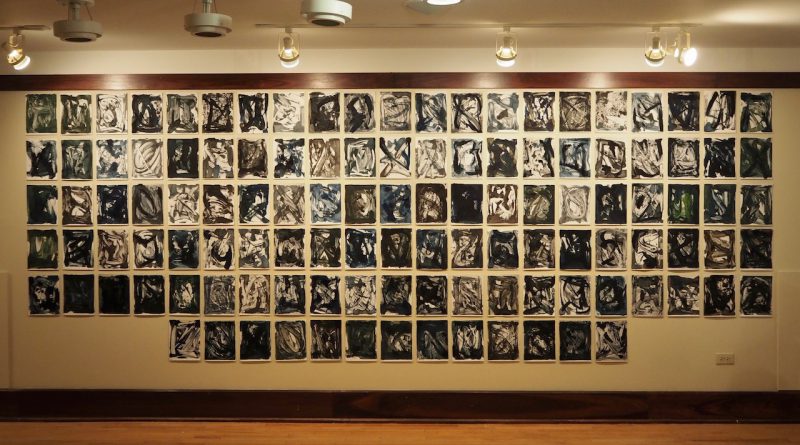 Puerto Rican artist Richard Santiago has found new meaning in his artwork in the months since Hurricane Maria. His latest piece will honor the victims of the hurricane with a pointed criticism of President Trump and the Puerto Rican government.

“After the hurricane, my work was never really the same,” said Santiago.

The piece, ““The Frailty of Strength & Viceversa,” debuted on Friday, May 4th, at the Boathouse Gallery in Humboldt Park.

Santiago said the piece will be composed of 911 unique monotype prints that come together to represent the 911 unnamed individuals who were cremated after the storm without an official medical examination by the Puerto Rican government. Each monotype is a manifestation of one of the victims, he said.

The project is a collaborative and crowdsourced effort between Santiago and anybody who wishes to contribute. Each monotype is purchased by a collaborator, as Santiago calls them, and is given a name, age and town to symbolically honor the hurricane victims.

Santiago completed 126 of the 911 monotypes for Friday’s debut, but hopes to see the collection grow as the piece travels to New York, Orlando and San Juan, with more collaboration from each city. At the end of the show, each contributor will take home their print.

Santiago has received orders for 32 more monotypes since Friday’s installation.

He was inspired by the idea of fingerprints as unique identifiers. During a medical examination, bodies can be identified by their fingerprint. But because the cremated bodies were not examined and still remain anonymous, Santiago sought to personify each victim through an art form that symbolizes a unique identifier.

“What I’m doing is, symbolically, a fingerprint,” he said. “A fingerprint is what identifies each one of us, is the particularity of each one of you, your own personal characteristic. And in art, there’s only one type of art that is that same way: the monotype.”

A monotype is a single design; each one has a serigraph print base of a paper-towel design, and a unique and abstract paint design pressed on top by a plate of glass. The paper-towel design is a reference to President Trump tossing paper towels to a crowd during his visit to Puerto Rico after Hurricane Maria.

“Only one exists, and even if you try to recreate it, it won’t be the same,” Santiago said. Like human beings, he said, each monotype is “unique and imperfect.”

Santiago and his family evacuated their home in Puerta de Tierra after the hurricane and found refuge in the vibrant and close-knit Puerto Rican community in Chicago. He arrived in October, and his wife, Angie, and two sons, Raxel and Kian, arrived on Christmas Day.

For Santiago, this project has been healing. He said he felt dirty after the storm, and making each piece is cleansing, closing his wounds in an artistic way. But he is only the middle man, he said. He is the one who makes the art, but the meaning of each monotype – the name, age and location – come from the collaborators to honor the victims.

“The process of putting it up is ritualistic. It was really therapeutic,” Santiago said.

The color scheme represents the mood of the project. The dark blue tones for nostalgia and distance, with the earth tones bringing a sense of hopefulness. The hints of green represent the vast green landscape of the island. But to Santiago, the meaning of each print is more powerful than the color.

This project is a call to action, he said. He doesn’t want the deaths to be lost or forgotten in the continued conversation of recovery and rebuilding. Each monotype costs $15, and part of the proceeds will go to a fund for a class action lawsuit against the government of Puerto Rico.

Santiago wants people to think out of the box when they think about art. Art can be more than something to look at; conceptual art can search for meaning and truth, he said. As the project travels, it will grow bigger with each contribution, and its shape and assembly will change for each display.

It has a life of its own, he said.

The installation will hang in the Humboldt Park Boathouse Gallery, 1301 N. Sacramento, until May 25, 2018. To purchase a monotype, contact Santiago at richardsantiagoart@icloud.com or via Facebook.