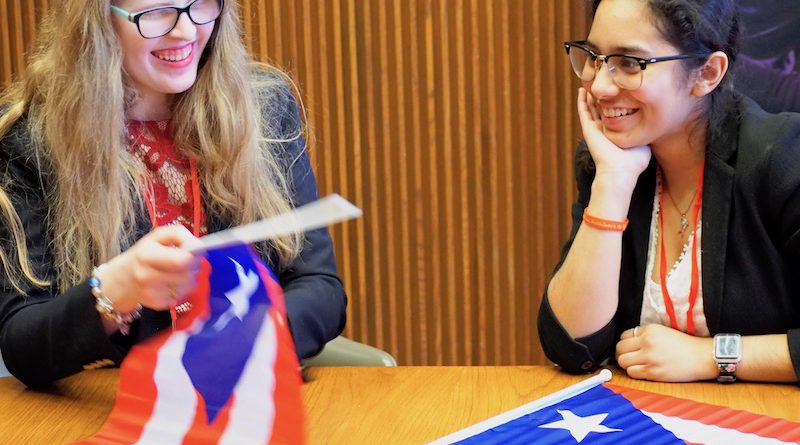 Puerto Ricans need to take control of their own future as the island continues to rebuild after Hurricane Maria, said Carmen Yulín Cruz, mayor of San Juan, Puerto Rico, in her keynote address at an all-day symposium at The University of Illinois at Chicago on Friday, April 20, exactly seven months after the storm hit the island.

The symposium featured three panels of activists, scholars, artists and filmmakers who discussed colonization, disaster capitalism, the Puerto Rican diaspora and grassroots rebuilding efforts. Yulín Cruz praised the emergency relief efforts of Chicago in the immediate aftermath of the hurricane, and said the relationship between Chicago’s Puerto Rican community and the island must remain strong.

“For Puerto Ricans here, this is the time. There are no more excuses. We either move forward or we don’t move at all,” said Yulín Cruz.  “I carry within me the voices of thousands of people, of the ones we did get to, and of the ones we didn’t get to, and the ones that died alone because they had no food or medicine.”

“So, I need you to help me,” she said. “Let them know, wherever they are, that their lives mattered. Because we didn’t start this fight, but we’re going to finish it.”

The very execution of the symposium is one example of how Puerto Ricans in Chicago maintain a relationship with the island.

The Union for Puerto Rican Students, UPRS for short, works with the Latino Cultural Center and the Latin American and Latino Studies department at UIC to bring awareness to Puerto Rican issues and culture on campus.

Lici Rivera, vice president of UPRS and co-director of the Pa’Lante conference planning committee, said Friday’s symposium focused on rebuilding the island because the devastation of the hurricane revealed neglected infrastructure that has been exacerbated by colonial relationship with the United States.

“Especially with the hurricane, it’s bringing to light a lot of the political issues we’ve had with the U.S. as well. I think that it lends a new sense of rallying,” Rivera said. “A renewed fervor, I guess, for everyone.”

UPRS is open to students of any background, though most of the group’s members are Puerto Rican. The group is small, with about 10 to 15 members who regularly attend meetings, but their connections with UIC faculty, departments and the greater Puerto Rican community in Chicago help the organization plan big events such as the Pa’Lante conference and the symposium.

Mariel Rancel, president of UPRS and director of the conference planning committee, said the organization also asked themselves about what they can do for Puerto Rico specifically as young people and students on the mainland, noting that the relationship between the diaspora and the island has shifted in the months after the storm.

“The scale of this, is that what Hurricane Maria did for the diaspora, is we all took a moment and said ‘woah, we are needed,’” Rancel said. “What can we do as young people, as students? What power do we have in helping out in Puerto Rico?”

“That debate, though, as a whole, has sort of hushed down by the hurricane, just out of recognition of need, so I feel like there has been a lot more solidarity,” said Rancel, who sees this moment as an opportunity to rebuild and reclaim agency on the island.

The idea for the symposium emerged when Chicago groups like the Puerto Rican Cultural Center and Puerto Rican Agenda recognized an urgent need to deal with both immediate emergency survival after Maria and to assist with a longer-term plan for rebuilding Puerto Rico, said Andy Clarno, acting director of the Social Justice Initiative at UIC.

“We began by building partnerships with some organizations in the community, the Puerto Rican Cultural Center and the Puerto Rican Agenda, recognizing that they would have a much stronger sense of who is doing important work on the island and could build on the connections between the Puerto Rican diaspora and Puerto Ricans in Puerto Rico,” Clarno said.

About 102,000 persons of Puerto Rican origin lived in the City of Chicago in 2010, according to a research report by the Puerto Rican Agenda.

“Something special about the Union for Puerto Rican Students is that we do work closely with faculty and organizations in the community to keep those ties strong,” Rancel said. She added that the group is strongly supported by José López, a lecturer in the Latin American and Latino Studies department at UIC and the director of the Puerto Rican Cultural Center in Humboldt Park. Between his teaching at UIC, work at the cultural center and continued advocacy for Puerto Ricans on the island and in Chicago, López is a vital bridge between the communities.

“We can’t die because José won’t let us die,” Rancel said, laughing, when talking about keeping UPRS alive and active on campus and in Chicago.

Rivera said the current movement to rebuild Puerto Rico after Hurricane Maria is more personal because many people in Chicago still have family on the island.

“It’s way more intense now because it’s not only about ‘let’s fix the island’ but about making it better for people that I love and people that I know that are still there.”

“I think if you have such a personal connection with something obviously you’re going to be more passionate about it and dedicate more resources to it,” she said.

Featured photo: Mariel Rancel, left, and Lici Rivera, right, of The Union for Puerto Rican Students at The University of Illinois at Chicago, discussing the Pa’Lante conference and symposium on Friday. Photo: Sofi LaLonde