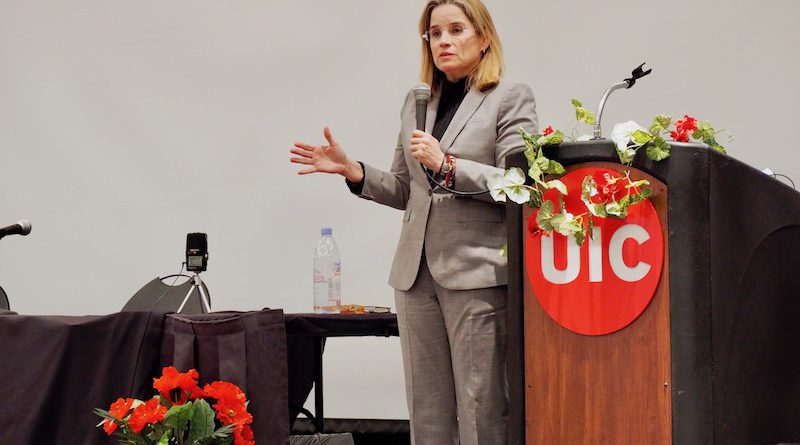 One can’t help but think of Helena’s description of Hermia in A Midsummer Night’s Dream upon meeting the mayor of San Juan, Carmen Yulín Cruz: “Though she be but little, she is fierce.”

“My grandma said, ‘you’re very small, so when you get into a fight on the school playground, you have to run a little faster, hit a little harder and scream at the top of your lungs,’” the mayor said during her keynote address at the University of Illinois at Chicago’s “Puerto Rico, Hurricane Maria and the Crisis of Colonialism” symposium on Friday, April 20.

Years later and Yulín Cruz, who was recently listed as one of Time Magazine’s 100 Most Influential People of 2018, maintains her fighting spirit—even though she is dealing with the aftermath of a much stronger bully than the one found terrorizing classmates during recess.

Seven months ago, Hurricane Maria tore through Puerto Rico, leaving the island in a state of humanitarian crisis. But for Yulín Cruz and many others, it’s as if the hurricane happened yesterday. To this day, between 75,000-100,000 Puerto Ricans still don’t have electricity, 500,000 roofs need to either be totally or partially built and Puerto Rico’s suicide rate has increased 55 percent, according to the mayor.

Yulín Cruz is known for denouncing President Donald Trump and the federal government’s response to Hurricane Maria and naturally, her speech was not devoid of these recriminations. Throughout the night, she accused the president of being a “hater-in-chief” instead of a “comforter-in-chief” and questioned how the Puerto Rican Agenda, a non-profit organization that works toward policy for the advancement of the Puerto Rican community in Chicago, was able to send 75,000 pounds of life-saving supplies to the island just five days after the hurricane when the Federal Emergency Management Agency (FEMA) couldn’t.

“While he [Trump] was at Mar-a-Lago playing golf, I was up to here in human excrement,” Yulín Cruz said, gesturing to her stomach. “Not because I’m the mayor, but because I’m human and when humans—whose blood courses through their veins—see other humans in need, that’s what they do.”

The mayor also expressed exasperation with FEMA for encouraging Puerto Ricans to visit a website to apply for aid when the island had no power and with the unhealthy food the government agency supplied the island a few weeks after the storm.

Though Yulín Cruz is critical of the administration, she is focussing her efforts on moving forward and encouraged the audience to do the same.

“We can blame it on the current president, but slavery isn’t better or worse depending on how your master treats you. If your master gives you three meals a day and beats you 10 times a week, that doesn’t make slavery better than if your master beats you 100 times a day and feeds you one time,” she said. “The sheer sense of slavery is what is wrong. So we cannot depend any longer on a congress being good or bad. We have to change the structure that allows somebody else—as Gandhi said—to  be masters in somebody else’s land.”

While Puerto Ricans differ in opinion when it comes to the question of statehood versus independence, Yulín Cruz urges Puerto Ricans of different ideologies to come together, find common ground and institute change. A proponent of free association, the mayor believes in redefining the relationship between the United States and Puerto Rico. In this scenario, Puerto Rico would be considered an independent nation with a special relationship to the United States.

One way to reenvision the relationship between the U.S. and Puerto Rico is by recognizing that allies can be found in unlikely places—even across race and party affiliations. Yulín Cruz recalls the seven white men who declared the segregation of public schools unconstitutional in Brown v. Board of Education, and more recently,  Senator John McCain’s submission of legislature that would repeal the Jones Act, a 1920 law that requires all goods shipped between U.S. ports to be transported by U.S. vessels.

“It’s all about building an alliance to combat colonialism,” she said.

Luis Gustavo Sanchez Conde, an attendee at the keynote address who works in progressive politics, appreciated Yulín Cruz’s nonpartisan message. “It was very refreshing that she was encouraging the youth to find a way forward and not get entangled in party politics.”

Others in the crowd remarked that the mayor spoke to the people in an accessible, poignant way. Two friends, Hannah Jones and Tatiana Cortes—who study social work at Loyola University Chicago and University of Chicago respectively—felt  Yulín Cruz’s speech was a helpful framework to understand Puerto Rico’s past and present.

“I feel very ignorant about the repercussions of Hurricane Maria and the relief efforts so it was good to have this education,” Jones said. “The way she spoke was so raw and authentic. She named Puerto Rico as a colonized area, which I think is really powerful language. She seems to meet people where they’re at.”

Cortes, who is half-Puerto Rican, half-Colombian, said the speech has shown her new ways to get involved.

With 42 days left until the beginning of hurricane season on June 1,  Yulín Cruz recommends traveling to Puerto Rico with a church, school organization or other reputable group to help rebuild houses. She also asks people to take every opportunity they can to keep Puerto Rico in people’s minds, whether that be by retweeting an article about the island or talking to and telling the stories of family members still living there.

“I carry within me the voices of thousands of people, of the ones that we did get to and the one s that we didn’t get to, of the ones that died alone because they had no food or medicine,” said Yulín Cruz.  “So I need you to help me let them know that their lives mattered. We didn’t start this fight, but we’re going to finish it.”