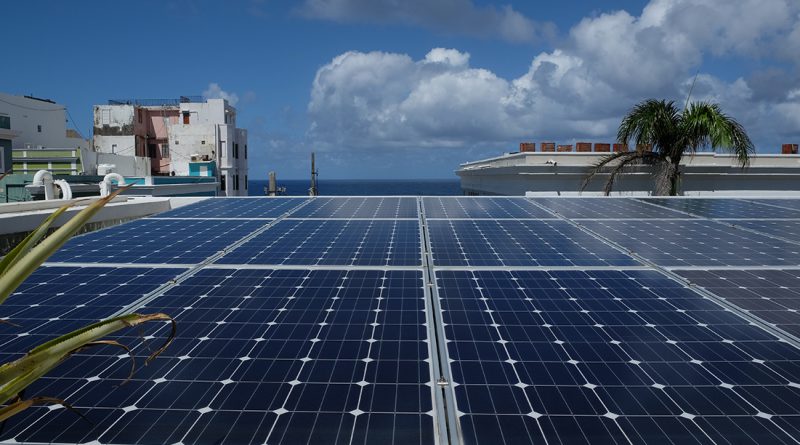 When Hurricane Maria wiped out power to most of Puerto Rico, it showed the rest of the world what many on the island already knew. Puerto Rico’s energy system, run by the Puerto Rico Electric Power Authority (PREPA) government utility, was seriously outdated, unreliable and extremely vulnerable to the kind of extreme weather that frequently hits the island.

Puerto Ricans knew they needed something different. And now the island’s energy system is at a turning point, as PREPA and other decision-makers, including the fiscal control board overseeing the island’s debt restructuring, decide what to do.

Solar paired with batteries that can operate independently of the grid is an obvious option for the island, with its rugged terrain and abundant sunshine.

But solar initiatives received “terrible resistance” from the Puerto Rican government and PREPA prior to the hurricane, in the words of Ruth “Tata” Santiago, an attorney with the Puerto Rican environmental law group Comité Diálogo Ambiental, Inc. Many of her clean energy allies on the island and the mainland U.S. feel the same way.

“There’s only one grid here and it belongs to PREPA and no, they have not been helpful in trying to make the transformation to more sustainable renewable energy,” Santiago said.

As PREPA and other leaders debate how they will rebuild the energy system, many residents are taking things into their own hands with solar installations that are not dependent on the grid and that can offer them resilience and self-sufficiency despite hurricanes or a government that still hasn’t restored power to many Puerto Ricans six months after the hurricane.

“You can see the roofs as they’ve been impacted by the hurricane,” said Santiago as she drove through a community in Guayama, on the southeast side of the island. She pointed out homes that stood alongside the road with blue tarps as makeshift roofs to protect from the elements since Hurricane Maria damaged homes across the island in September 2017.

Hurricane Maria made landfall less than 30 miles from Guayama near Salinas, the municipality where most of the island’s energy is generated, primarily by fossil fuels.

“We had no refrigeration,” Santiago said.

The lack of electricity impacted every part of the lives of the island residents and turned community centers into hurricane relief facilities organized by locals. One such center can be found in the community of El Coqui. It also acts as a meeting place for Coqui Solar, a community organization focused on making solar energy accessible for local residents.

Shortly after the hurricane, residents of El Coqui began using the neighborhood’s community center as a rallying and donation point, where they were able to prepare food for friends and family members as well as receive donated solar lamps, solar radios and other solar-powered products.

Many people have been displaced due to Maria, hundreds of thousands of the island’s residents are estimated to have left the island for the states while others remain in the homes of friends or family members across the island.

Saybian Torres and his family stayed with relatives  — 12 people in one residence with one bathroom.

The 17-year-old resident of Las Mareas, in Guayama, was without power for 109 days.

“I counted every day,” Torres said. After surviving without power, he realized solar energy is the future and began volunteering with Coqui Solar.

Saybian Torres shares his experience during and after Hurricane Maria. Photo by Bill Healy, audio by Bill Healy and Elizabeth Beyer.

Eddie Ramirez owned his small bed and breakfast in Old San Juan for five years before the hurricane. He was able to house guests during and immediately after the storm, thanks to the power of the sun.

Since the day Casa Sol opened, it has run on solar power, the only exception being the air conditioning. It remains the only business in the area powered predominantly by renewable energy. The bed and breakfast installed 30 solar panels on the building’s rooftop and hooked them up to batteries, for a total cost of $30,000.

“Five years ago people said, ‘Why are you spending so much money on the solar panels?’” said Ramirez. “Now we actually produce more [energy] than we consume.”

After panels were installed at the bed and breakfast, a neighbor liked the idea and installed 20 of her own. According to Ramirez, only four of her panels were connected to a battery to store the power for when the sun isn’t shining. The remaining 16 were connected to the grid run by PREPA, and used exclusively to sell power back to the grid to lower her electric bill. After the hurricane, those 16 panels continued to produce energy but it went to waste since the grid was down. Then Ramirez connected his neighbor’s solar installation to his array, which includes batteries. Both buildings produced energy with 50 panels combined after the storm.

Ramirez and his neighbor are on what is referred to as PREPA’s “grid-tie system.” When Ramirez buys power from the grid, he pays 21 cents per kilowatt hour (kwh); but for the electricity he sends back to the grid from his solar panels, PREPA pays only 7 cents per kwh.

“At least they give us something, but [the price] should be even,” Ramirez said. “If you actually want to lower your electric bill you have to have a huge production to compensate the difference in price.”

After the hurricane, Ramirez opened up the bed and breakfast to residents of Old San Juan who needed electricity to survive.

Ramirez ran power cords from his building to nearby homes, allowing neighbors to power refrigerators. Casa Sol transformed from a solar-powered bed and breakfast into a makeshift community center. Ramirez refrigerated his neighbors insulin, provided access to a cistern that stored 3,000 gallons of drinking water, and let neighbors use Casa Sol’s laundry facilities. Without electricity to power pumps, many Puerto Ricans were also without water after the storm.

“Usually when there’s a water outage, the city brings in water trucks, but that never happened,” Ramirez said. “We supplied everything to our neighbors.”

Ramirez lost a few solar panels, due to the storm’s nearly category 5 winds, but he has learned from his experience and purchased industrial strength straps used by long-haul truckers to fasten the panels to the base.

Eddie Ramirez talks about how the powerful hurricane damaged the solar panels on the roof of Casa Sol. Photo and audio by Elizabeth Beyer.

“If 68 percent of the houses have a solar system, we could make 110 percent of the energy that we need” to power the island, said Maribel Hernandez, a leader at the environmental justice organization Casa Pueblo.

Casa Pueblo, in the mountainous community of Adjuntas, has been exploring solar energy options since 2000 and every year they add to their existing system. Currently, the center is powered entirely by solar energy, along with batteries that store the solar power for when it’s needed. Casa Pueblo’s Adjuntas location includes a coffee-roasting facility, community laboratory, a community theater and a community radio station. The center’s “mini-grid” cost around $40,000 and includes 42 solar panels, Hernandez said. Casa Pueblo acts as an idea incubation lab for university students to build and test solar inventions, such as a solar street lamp developed by students at the University of Puerto Rico at Mayaguez.

“If we change [to solar energy], we’re going to save $100 million per year” Hernandez said, referring to the island. “Also, we could have an economy for Puerto Rico.”

The community of Adjuntas was without electricity until December 22, but Casa Pueblo never lost power during or after the hurricane. Community members visited the center to get information on the health of their friends and relatives across the island. Casa Pueblo’s radio DJs would ask on-air about family members, and broadcast information. The center also distributed thousands of solar lamps and water filters to residents after the hurricane.

According to Tom Sanzillo, the director of finance for the Institute for Energy Economics and Financial Analysis, PREPA’s $9 billion debt, management problems, lack of transparency and public accountability have plagued the utility. These problems, as well as others, led PREPA to file for bankruptcy just a few months before Hurricane Maria, after a board established as a result of the Puerto Rico Oversight, Management and Economic Stability Act (PROMESA) rejected the utility’s plan to restructure the debt.

PREPA had planned to achieve 15 percent utility-scale renewable energy by 2035, in compliance with Puerto Rico law. But renewable energy should be a much bigger priority — the top priority — for investment in light of the utility’s struggle before and after the hurricane, said Sanzillo.

Meanwhile Sanzillo and other clean energy advocates also say Puerto Rico should invest in microgrids, which can disconnect from the larger grid and provide power to local areas when the larger grid has outages.

The Puerto Rico Energy Commission — an independent group established in December 2014 to “achieve a reliable, efficient and transparent electric system, which provides power services at reasonable prices”  — issued a draft of microgrid regulations in early January.

Microgrids could help Puerto Rico avoid an island-wide blackout if another hurricane like Maria were to hit. They can support energy production and distribution on a small scale in mountainous communities that are still without power due to their inaccessibility.

Many residents fear that the government will never restore power to hard-to-reach areas. Some experts have estimated that 250 small enclaves may never be reconnected to the grid.

Hence some community organizations and institutions, including the National Institute of Island Energy and Sustainability at the University of Mayaguez, are exploring the possibility of microgrids built by and for communities separate from PREPA.

In late January, Puerto Rico Governor Ricardo Rossello released a plan to privatize parts of PREPA after a push by the island’s Financial Oversight Management Board. According to Tom Sanzillo, there hasn’t been any coherent explanation as to what privatization will mean for the future of Puerto Rico’s energy production. But residents are skeptical.