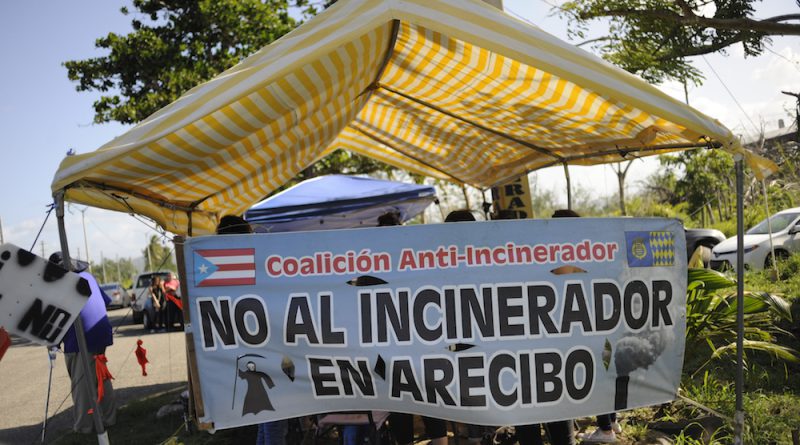 Sharing homemade green banana tamales at their campsite on the side of a busy highway February 11, a dozen Puerto Ricans celebrated a decision by Gov. Ricardo Rosselló the day before to pull his support for a long-fought trash incinerator proposal in Arecibo, a rural beachfront town 40 miles west of San Juan. The incinerator proposed by Energy Answers would burn tires, treated wood, plastics and used car parts, creating hundreds of tons of toxic ash daily and emitting dangerous fumes to a community that already exceeds the national standards for lead in air.

The governor’s decision came as a welcome surprise for the protesters, many of whom have camped at the proposed site six days a week for several years. Then on March 9, the Federal Oversight and Management Board (FOMB) announced that Energy Answers withdrew its proposal to get expedited approval from the board as a “critical” project.

Wilfredo Velez coordinates Ciudadanos en Defensa del Ambiente, one of the anti-incinerator groups in Arecibo. After the project was pulled from critical status, he said residents celebrated in the street and decorated their cars with letters spelling out “RIP Energy Answers.”

Companies can propose a project to be deemed “critical” by the fiscal control board, by submitting it to a website. The fiscal control board’s revitalization coordinator Noel Zamot is in the process of considering whether to officially recommend projects proposed as critical, a designation which would help secure necessary approvals and permits.

Energy Answers had sought support from elected officials for the incinerator proposal for more than a decade, but residents feel like their vocal opposition, as well as the questionable financial outlook for the project, finally caused the company to withdraw its proposal from “critical” consideration.

But a critical designation and a recommendation from the fiscal control board is not necessary for projects to go forward, so activists remain skeptical that the incinerator is truly defeated.

Many see their fight as representative of the island’s colonial status, where the federally-appointed control board, with corporate interests, has much power over decisions affecting the health and well-being of the people.

The NGO Earthjustice has been representing community groups in a legal battle against the incinerator proposal, which still lacks some necessary permits.

“I think, frankly, the communities are rightly celebrating the fact that it’s withdrawing from critical project status consideration,” said Earthjustice staff attorney Hannah Chang. “It’s a sign that it’s on its last legs. I think it’s just a matter of monitoring it to see what what Energy Answers plans to do next.”

Along with Energy Answers, three other projects that had been proposed for critical status were withdrawn on March 9: a wind farm, a plan for new energy infrastructure at two jails and a plan for new equipment for PREPA. The Arecibo incinerator was the only one that had lost the Governor’s support. Energy Answers could re-submit their proposal at any point, according to the CPP website, which logs submitted proposals.

Chang said the community organizers have been key to raising awareness of the environmental impacts of trash incineration. “Without them,” she said, “there would be no opposition.” For years, protesters sat six days a week at a makeshift camp at the former paper mill where the incinerator would be built, complete with card tables and plastic chairs under yellow tents. Since the proposal was withdrawn, protesters have been at the camp on Monday, Wednesday and Friday mornings.

“We will continue to let our presence be felt so that Energy Answers knows that we are not sleeping over the announcements both by the Governor and by the control board,” said Velez.

The incinerator was framed as a “waste-to-energy” project that would generate power from the incineration of waste, without burning oil or gas, while at the same time helping the island deal with its waste and creating jobs. But activists argue the island has no problem generating power, as existing plants meet or exceed demand and renewable energy is increasingly being considered. The archaic power delivery system — not a lack of generation — is why many Puerto Ricans are still without power months after Hurricane Maria.

Energy Answers had said the incinerator would generate 77 MW of power, representing about two percent of the island’s daily use.

It would burn 2,100 tons of tires, treated wood, plastics and used car parts daily, which opponents noted would create toxic ash and fumes affecting the region – home to dairy and meat industries and more than 60 schools. Ash and fumes would include heavy metals like lead, arsenic, chromium, cadmium and mercury which can cause asthma, bronchitis, cardiovascular disease, stroke and cancer. And Arecibo residents are already suffering from a legacy of contamination. A former battery smelter caused severe lead pollution in Arecibo and is now designated a Superfund site.

Energy Answers proposed disposing of the ash in landfills in nearby cities like Peñuelas, worsening ongoing pollution there. Carlos Garcia, a mechanical engineer and activist living in Arecibo, said the community sought out activists from all around the island who could also be affected.

“Since the very beginning, we urged communities to come out and express themselves,” said Garcia. “This collaboration proved to be the success that we have now achieved. If it was not for the activism against the incinerator, it would already be happening.”

Arecibo experienced 10-foot flooding after Hurricane Maria. Rafael Bey, a 73-year-old retired genetics and biology professor who lives in Arecibo, was stranded in his home for several days without help. “In one hour the water came up to the ceiling,” Bey said. The incinerator would intensify future flooding, organizers said, by displacing water from the site, and through proposed daily extractions from the Caño Tiburones wetlands, an important natural flood barrier.

Locals said the security personnel who once monitored the site no longer come around, another sign the company may be abandoning the plan altogether, they said. The community continues to fight Energy Answers in court through a handful of ongoing cases. Residents against the incinerator are optimistic about their progress, but won’t stop protesting until they are positive Energy Answers is no longer pursuing the incinerator.

“We are happy with what happened with retiring the project from critical status and we are happy that the Governor has expressed himself against it,” Velez said. “But we are not going to be complacent and feel like this is the end.”