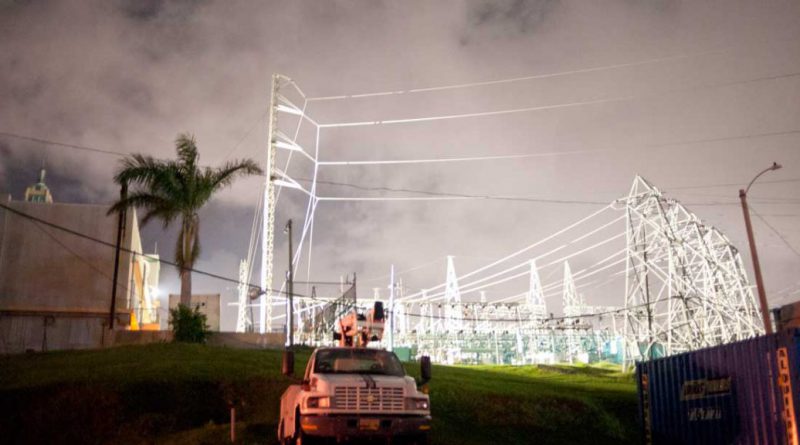 Audio story can be found on SoundCloud here.

An explosion and fire at the Monacillo power station in San Juan caused power outages across 10 municipalities late at night on Feb. 11, a reminder that even in areas where the grid has been fixed since Hurricane Maria, the island’s electric infrastructure is still precarious and troubled.

Shortly after 9 p.m., the lights went out abruptly in the capital San Juan, along with towns including Caguas, Barceloneta and Aricebo on the North half of the island. Some regained power after about 30 minutes, while others remained dark through the night. By midnight the fire was extinguished, but some residents said the outage provoked feelings of PTSD and sparked bad memories of the harrowing weeks following the hurricane.

Angel Figueroa Jaramillo, president of the union of workers at the Puerto Rico Electric Power Authority (PREPA), said the explosion was not related to the impacts of Hurricane Maria, but likely due to “maintenance issues.” He said the exact cause of the explosion and fire is being investigated. There were no injuries. Jaramillo called the Monacillo station “the brain” of Puerto Rico’s electricity system.

PREPA, the government-owned electric utility responsible for generating and delivering power across the island, was facing structural problems and saddled with about $9 billion in debt before the storm, and it remains in a state of disrepair. More than 400,000 Puerto Ricans are still without power since the hurricane.

Power substations on the island experience transformer explosions regularly, affecting different areas, but the Monacillo explosion highlights the widespread problems within PREPA. Omar Perez, a waiter in San Juan who lives in the Miramar neighborhood, said the outage was the first he remembered since December.

To Giancarlo Rexsch, a resident who stopped by the station to watch the fire, it looked like a nuclear explosion.