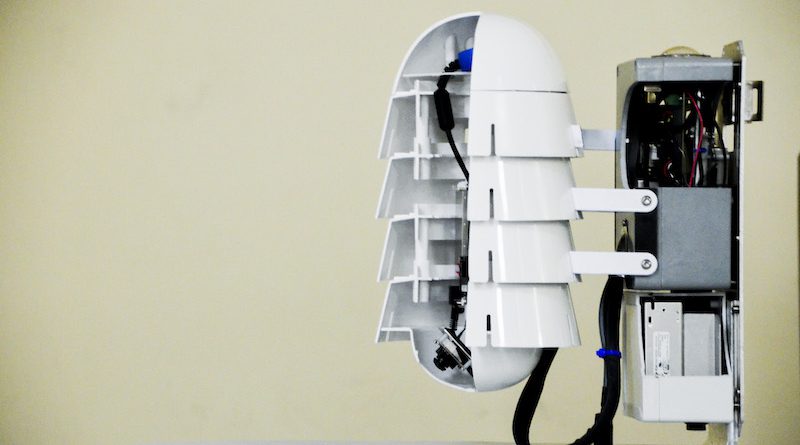 It’s called “the nursery.” A half-dozen white-domed machines lie on racks in a high-ceilinged room at Argonne National Laboratory, about half an hour west of the city. With the low, winter afternoon sun hitting them just right, it’s not a stretch to imagine them as eggs warming in an incubator.

These little plastic nodes are packed with sensors and backed by millions in federal funding. Eventually, the microwave-sized devices will make their way out to lampposts in Chicago or Detroit or Denver or beyond to quietly measure the world around them.

As SJNN Fellow David Unger writes for South Side Weekly, this is the Array of Things, a
partnership between the government, the city and Chicago universities. The sensors are meant to measure traffic patterns, noise, air pollution, vibration and other indicators, and send the information to online databases “where scientists, city officials, hacktivists, and residents will be able to access and analyze the streams of hyperlocal data,” as Unger writes.

The sensors could be a major tool for pursuing environmental justice, showing disparities between neighborhoods. But Unger also explores skepticism over the project. As Pilsen Alliance director Byron Sigcho told Unger: “Research is only as good as it addresses the needs of the community. If it doesn’t, we have to ask, well, whom is that research for?”

Unger was part of the SJNN Fellowship Cycle focused on energy and environmental justice, producing this story as part of the fellowship. To see the full story and interactive graphic, visit the South Side Weekly website here.