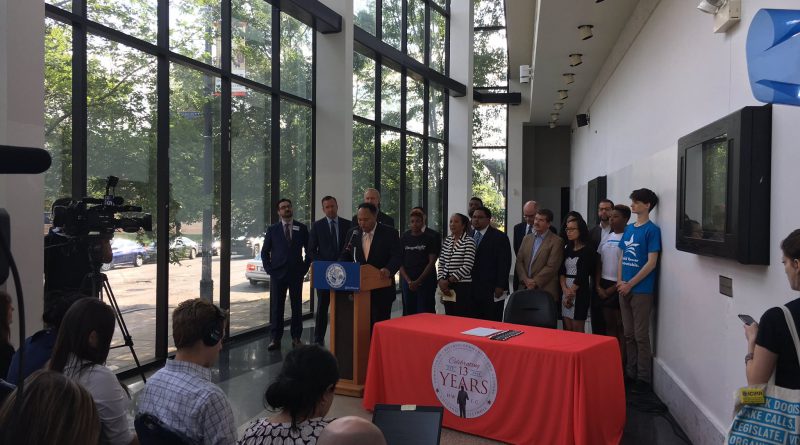 In a rare display of bipartisan harmony, Illinois Gov. Bruce Rauner signed into law one of the most inclusive versions of automatic voter registration (AVR) in the country on Aug. 28. A year after vetoing a similar bill, saying it would break federal law and “open the door” to voter fraud, Rauner said the new law will simplify and modernize the voting process.

Supporters celebrated the signing at the Harold Washington Cultural Center, named for Chicago’s first black mayor, on the 54th anniversary of the Rev. Martin Luther King Jr.’s plea for equal voting rights in his “I Have A Dream” speech.

“If democracy would continue to work like this, I think we’ve got some good hope,” said Cook County Clerk David Orr, who served as Washington’s vice mayor in the 1980s.

The Illinois AVR law is the first in the country to allow agencies outside of the Secretary of State to register voters. Under the law, staff at different agencies will automatically register eligible voters unless they choose to opt out.

Democrats pushed to offer AVR at public assistance and social services agencies, which help low-income people and people of color who may not have driver’s licenses. Meanwhile at the Republican governor’s request, the state Department of Natural Resources and Department of Financial and Professional Regulation will also register voters.

But a combination of unrelated policy delays, lack of state funding and security concerns all threaten the law’s rollout in Illinois. The Secretary of State’s Department of Driver Services is mandated to begin AVR by July 1, 2018, and other agencies are supposed to start registering voters a year later. Organizers now worry the 2018 deadline won’t be met. Advocates want the law implemented, as mandated, before next year’s November general elections when Illinoisans will decide races for governor, secretary of state, attorney general, all 18 of the state’s U.S. House seats, 157 seats in the Illinois General Assembly and more.

About 2.2 million of the 13 million eligible voters in Illinois are not registered. About 1 million voters could be added to the rolls when they visit local agencies thanks to the comprehensive law, organizers say. States with similar laws report increased voter turnout after implementing versions of AVR.

Just Democracy Illinois, a coalition made up of dozens of local organizations, led advocacy efforts for the bill and is now calling on the state to enforce the law on schedule. Ami Gandhi, Abe Scarr and Jay Young make up Just Democracy Illinois’ AVR implementation team. Gandhi is director of voting rights and civic empowerment at Chicago Lawyers’ Committee, Scarr is the director at Illinois Public Interest Research Group (PIRG) and Young is the political director at Common Cause Illinois.

In an August statement, Clerk Orr credited Just Democracy and other grassroots groups as “true unsung heroes” for their work on the law. A lead AVR bill sponsor, state Sen. Andy Manar, D-Bunker Hill, called the coalition “diligent and unrelenting” in its years of work leading up to the signing.

“We, as advocates, have looked at our role as being a way to lift up voices of people in the community who are hungry for change and want our voting system to be more inclusive,” Gandhi said. She said AVR is one way to make up for past civil rights abuses that blocked minorities from the polls.

“Our voter registration bureaucracies were set up very intentionally after the Civil War to reduce the electorate, to reduce the ability of freed slaves, as well as immigrant citizens and low-income community members, from being able to vote,” said Gandhi.

Young said AVR is the latest development in a state with a legacy of strong voting rights.

“This coalition is the group that brought same-day (registration), is the group that brought online (registration) and AVR was the next logical step,” said Young. “I do think it is fair to say that certainly Illinois is a national leader in voting rights. Period. Full stop. We’re at a point now where our coalition is actually in the beginning of the strategic planning stage, asking what’s the next thing we want to tackle.”

One major concern, organizers said, is whether AVR can be implemented in the Secretary of State’s office by the mandatory July 1 deadline.

On Nov. 27, the federal government granted the Secretary of State Jesse White’s office its third extension to comply with the REAL ID Act, which requires states to add specific security features to driver’s licenses and identification cards. Illinois now has until October 2018 to comply with REAL ID.

Illinois is one of 24 states with an extension. The state will eventually offer regular IDs, like Illinoisans have now, and REAL ID-compliant IDs, for which extra documents like proof of citizenship are needed. All Americans will eventually need IDs with REAL ID security features to board planes and enter federal buildings.

Advocates of the AVR bill said they drafted it with the assumption the Secretary of State’s office would begin REAL ID system changes by next spring.

But the REAL ID extension complicates AVR rollout for two reasons, said Young. First, he said, it would be easier for AVR to be implemented around the same time as REAL ID because “you only have to make one change as opposed to multiple changes to systems.” Secondly, citizenship information that would already be collected through REAL ID could be used in the AVR system.

Nathan Maddox, senior legal advisor to the Secretary of State’s office, said voters can still choose to get registered in-person, online, or at polling places even before the state is compliant with REAL ID standards.

“Some of these people leave the impression that we’re not going to be able to register voters,” Maddox said. “We register more voters than anyone in the state and we’re going to continue to do that.”

Young noted that the point of AVR is to shift from an opt-in to an opt-out system, wherein people who visit other agencies would be registered unless they opt out.

“It’s all about making it easier for you, taking that barrier off the list of reasons why you’re not participating in your democracy,” said Young. “That decision to make another affirmative step to get registered to vote – AVR is taking that off your plate.”

The lack of state funding also could delay AVR. Bernadette Matthews, assistant executive director of the elections board, said the AVR mandate is currently unfunded.

“The biggest obstacle right now is the ability to adequately fund the process and to implement it without funding,” said Matthews. “We are seeking a supplemental appropriation so there can be funds used to meet the mandate.”

Just Democracy Illinois submitted recommendations aimed at speeding up AVR implementation to the State Board of Elections at a Nov. 20 public hearing. They advised the board to continue to hold public hearings and include diverse community members, to assign an AVR coordinator at each agency, to provide quality training and enforce a system of oversight. Coalition members also stressed they are ready to help the State Board of Elections roll out the law.

“We are really trying to make sure that all the implementing agencies see our organizations as a resource for helping overcome whatever hurdles there are, and so we’re trying to understand what those hurdles are and the extent that we can be helpful to achieve our goals,” Young said.

Matthews said another public hearing will be held after the primary elections in March.

Illinois’ historic AVR law comes at a time that voter access is considered key in major races – like the recent U.S. Senate special election in Alabama – and when some elected officials including President Donald Trump are alleging voter fraud is a problem.

The Chicago Lawyers’ Committee, with Common Cause Illinois and Chicago Votes, recently submitted testimony urging the state election board to stop sharing data in Crosscheck, citing many concerns. They contend that claims of widespread voter fraud have been debunked and that Crosscheck runs on unsecure servers with weak privacy standards.

A 2017 paper by researchers at Stanford, Harvard, University of Pennsylvania and Microsoft says matched names in Crosscheck are false positives up to 99 percent of the time, and minorities are flagged and removed from voter rolls at high rates. More accurate and secure data is available through a similar system that the state already uses, called Electronic Registration Information Center (ERIC).

“When positive reforms like AVR are implemented, it will even further lessen the need for inaccurate, outdated tools like Crosscheck,” Gandhi said.

On Nov. 20, the State Board of Elections voted 4-4 along party lines, keeping the current policy to participate in Crosscheck for the time being. A pending bill in the state Senate seeks to ban Illinois from sharing voter information with Crosscheck.

Matthews said that in Illinois, Crosscheck potential matches are sent to the 109 election authorities throughout the state and it is their duty to make contact with voters and update voter rolls accordingly.

“A potential match does not mean a voter is automatically removed from the voter rolls,” Matthews said.

Today, a quarter of all eligible voters in America are not registered. If every state passed AVR, more than 22 million people would be added to voter rolls within a year, and more young and racially diverse voters would be included, according to a report by The Center for American Progress. Voter turnout rates also increase in states with AVR, the report says.

“AVR has the potential to benefit all of us here in Illinois,” said Gandhi, emphasizing “the unique impact that is possible for communities of color and eligible voters who have, for many years, been disenfranchised.