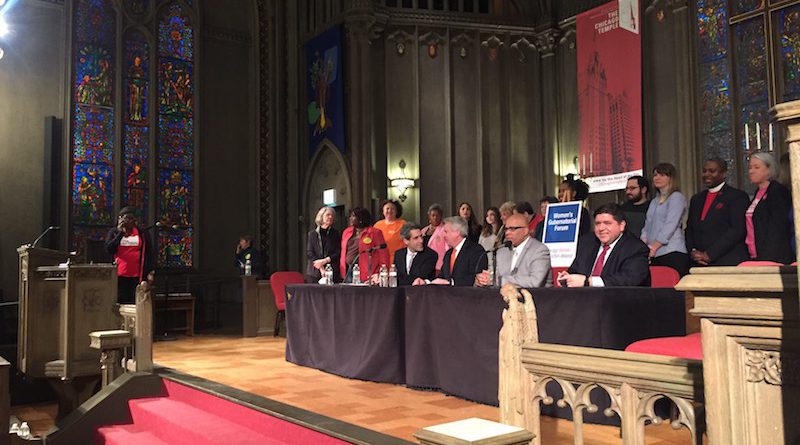 In the wake of a national cascade of #metoo stories about sexual assault and harassment and the federal government threatening access to contraception, hundreds of women gathered in the Loop on Dec. 9 to hear four Illinois Democratic gubernatorial candidates describe how they would be allies for women’s issues.

An audience of mostly women congregated in the pews of the historic, festively decorated Chicago Temple to hear the candidates — state Sen. Daniel Biss (D-Evanston), Chicago activist Tio Hardiman, Chicago businessman Chris Kennedy and billionaire J. B. Pritzker. The four men sat at a table on the temple’s altar, with a cloth picture of the pregnant Virgin Mary hanging above them.

There was a “Yas Queen” energy permeating the historic building before the official forum began. The two-hour long event kicked off with a buzz of cheers and introductions by the hosts, from the Chicago Women Take Action Alliance.

The candidates largely shared the same progressive, liberal views on each issue. But there were subtle, important differences that the audience was sure to note.

The moderators kicked off the forum with a topic that was top of mind for many in the audience — sexual assault.

Pritzker said sexual assault is a “power issue” and that it’s “incumbent upon men to stand up and say we believe you.” As the descendant of American slaves, Hardiman said he empathized with oppressed populations. Workplaces need to create safe environments for “women to speak up,” he said. In 2013 Hardiman was arrested for domestic violence, ending his career leading the anti-violence group CeaseFire; his wife later dropped the charges.

Kennedy said there need to be more women in power to “set the tone at the top.” He also pointed to his experience working alongside successful female leaders at the Merchandise Mart. Biss, who answered last, received applause when he asked the audience to “take a moment to acknowledge the brave women who came forward” with their stories of assault.

The first round of answers set the tone for the rest of the forum. Biss proved to be largely the most congenial of the four candidates. As a state senator, he also frequently referenced his political track record and achievements. Kennedy remained the most soft-spoken and often referenced his career at the Merchandise Mart as evidence of his ability to lead. Hardiman, the only African-American candidate, came across as an outspoken Chicago native, and an activist quick to highlight his first-hand experience working minimum wage jobs — something he claimed the other three candidates have never done. Pritzker, the Democratic front-runner who was recently named one of the wealthiest people in the world, remained confidently even-keel throughout most of the event.

The four men agreed that women should have the right to choose whether to have an abortion. Hardiman said he didn’t understand “why in the year 2017, we are still struggling with this issue,” receiving applause from the audience. Kennedy said it’s imperative to protect a women’s right to choose at the state level, given recent federal threats to abortion rights. Pritzker and Biss agreed that passing House Bill 40 in Illinois was not enough to protect women’s health care rights. A single-payer health care system should also be implemented for full protection, Biss said.

In regards to the minimum wage, Kennedy said the $15 minimum wage passed in Chicago and promoted by activists isn’t even enough to live on in Chicago. “I don’t want to be part of a society where we ask others to work full time and still live in poverty,” he said.

The current minimum wage is an “emergency,” according to Biss. He also called for ending the tipped minimum wage, which allows restaurant servers and others who receive tips to be paid less than the minimum wage. Advocates say this situation disproportionately impacts women, making them vulnerable to harassment as they need to please customers to earn tips. Pritzker proposed boosting childcare assistance to aid mothers working minimum wage jobs. And both Hardiman and Pritzker said women’s earnings could be boosted by more investment in women-owned small businesses.

When asked about the pay gap, Biss was the only one of the four candidates to acknowledge racial disparities. Meanwhile Pritzker called for ending the use of Chicago’s controversial gang database.

The candidates fully agreed on one dire need: ousting Illinois Governor Bruce Rauner. “Any candidate on this stage would make a far better governor than Rauner,” Pritzker said in his closing remarks.

A straw poll was conducted for two hours after the forum ended. Biss dominated the poll with 46 percent of the vote. Pritzker received 29 percent, Kennedy received 23 percent and Hardiman received 0.7 percent.